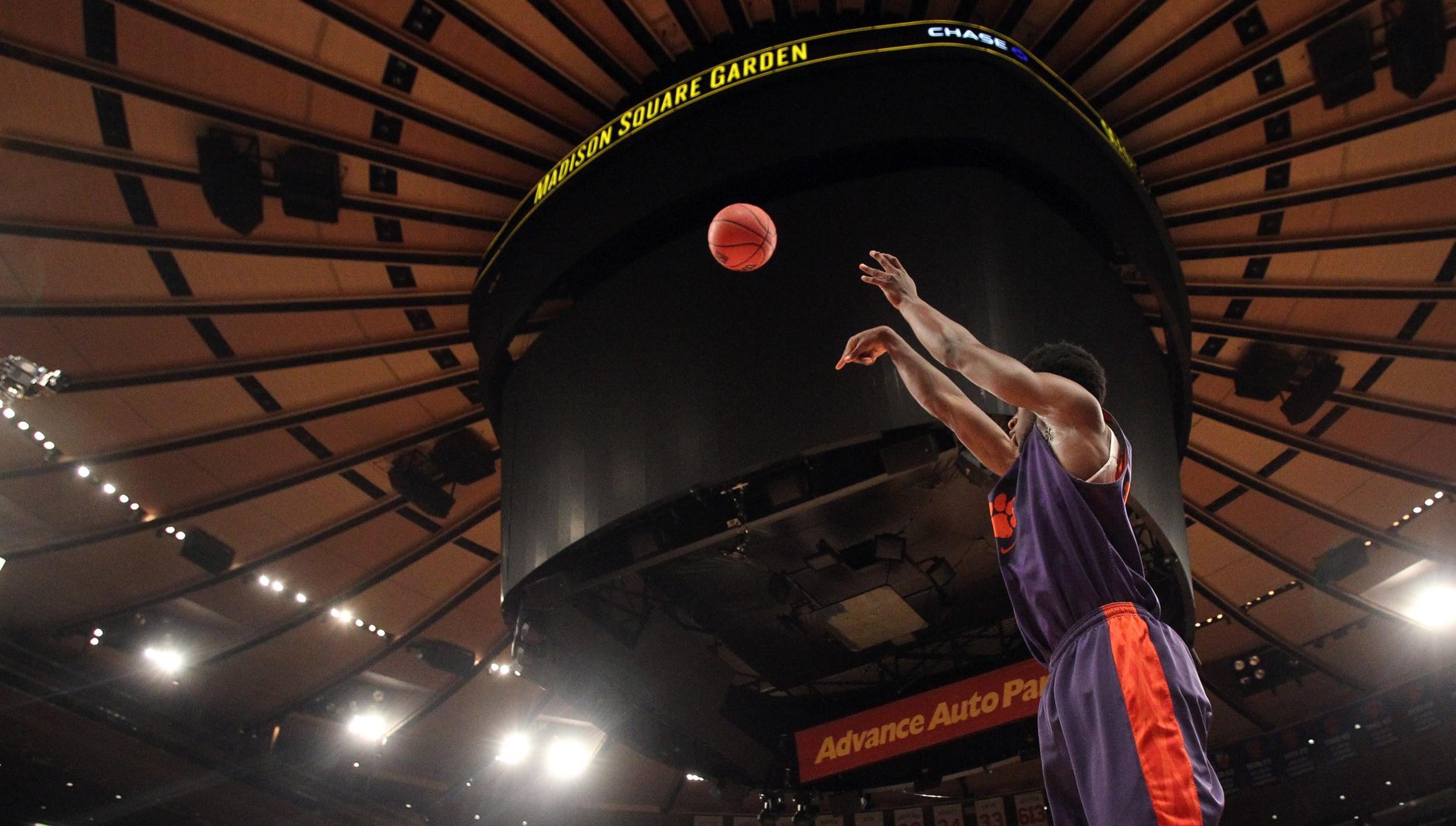 NEW YORK CITY – A season that began for the Clemson basketball team six months ago in Italy will end, one way or the other, this week in New York City.

But for the Tigers, the 2013-14 campaign has been just as much about the journey as it has the destination.

“It’s been a fun ride for us,” junior two-guard Damarcus Harrison said with a chuckle Monday at the Marriott Marquis in the heart of Times Square. “Nobody expected us to be playing this long, but it’s all fun when you’re with a bunch of guys that you like. I like this team so much. We bonded in Italy, and it’s only right that we finish in New York.”

While some skeptics might suggest winning the NIT gives a team little more than the right to call itself the 69th-best team in the country – behind the 68 that make the NCAA Tournament – it would mean much more than that to the Tigers.

Clemson (23-12), which began preparations for the season in earnest with a 10-day tour of Italy in August, arrived in New York on Sunday afternoon and went as a team to an NBA game at the Barclays Center in Brooklyn that evening.

After practicing Monday morning at Madison Square Garden – where they will meet SMU at 7 p.m. Tuesday for the right to advance to the NIT championship game – the Tigers set out to see the sights of the Big Apple in the afternoon.

“We’re enjoying the city, getting to see all the big buildings and bright lights that we’re not really used to,” Hall said. “Everybody is excited about being here and playing in Madison Square Garden.”

Picked to finish 14th in the ACC by the league’s media prior to the season, Clemson came within two controversial losses – to Pittsburgh in the regular-season finale and Duke in the ACC Tournament – of giving itself a legitimate shot to garner an NCAA Tournament bid.

A win over the Mustangs on Tuesday night would set a single-season school record for improvement from one season to the next, as the Tigers have already tied the 1938-39 team’s 10-win increase by going from 13 wins last season to 23 currently.

“Individually, these guys have all improved in terms of their skill level and their confidence,” Head Coach Brad Brownell said. “I really think we’ve collectively come together very well the entire season, and guys have really developed roles, accepted their roles and played at a high level competitively. I think we have played very close to our ability level on most nights.”

And Clemson will almost certainly need to bring its ‘A’ game against SMU (26-9), as the Mustangs are a No. 1 seed in the tournament and became the first ranked team – 23rd in the coaches poll; 25th by the AP – since 2004 to miss the NCAA tourney.Under the direction of longtime NBA Head Coach Larry Brown, SMU is led by a pair of double-figure scorers in point guard Nic Moore (13.5 points per game) and big man Markus Kennedy (12.2).

Brown’s NBA pedigree is evident in the Mustangs’ style of play, as well, as they rely on great court spacing like a pro team and utilize Kennedy’s outstanding passing skills out of the post to get open looks for their guards, led by first-team all-league selection Moore.

If the Tigers get by SMU, they will play the winner of Tuesday’s late game between Minnesota and Florida State for the NIT title at 7 p.m. Thursday.

“Every tournament you’re in, there’s only one team that’s going to win it, and most of the teams are ending their season with a loss,” Brownell said. “Right now we still have a chance to do that, but we’ve got to play two great games against very good competition. The teams that have made it here to the finals of the NIT have really been playing very good basketball, and any one of them could have been an NCAA Tournament team.”

Regardless of how the season finishes for the Tigers, their run to New York City can almost surely be used as a springboard for the future.

After pulling away from a dangerous Georgia State team in its NIT opener, Clemson beat a pair of NCAA Tournament mainstays in Illinois and Belmont in front of packed houses at Littlejohn Coliseum.

And for Brownell, seeing the fan base rally behind his program has been especially gratifying.

“It let us know that our fans appreciated us – how hard we were playing and what we’ve done this year,” he said. “I think it’s rallied a little bit more spirit behind Clemson basketball, and now you get to go on the road to MSG and have this experience for your players, I think that’s special.

“To let them spend some time in New York, go through these kinds of media situations where they’re getting interviewed and feel a little bit like a big-time player. I think it’s really special for them.”

And the players agreed, saying they were anxious to take the court at the arena that has been called “the Mecca of basketball.”

“It will be an adrenaline rush,” junior wing K.J. McDaniels said. “I’m always excited to play in a new place, especially Madison Square Garden, where most of us have never played. We’ll be locked and loaded and ready.”