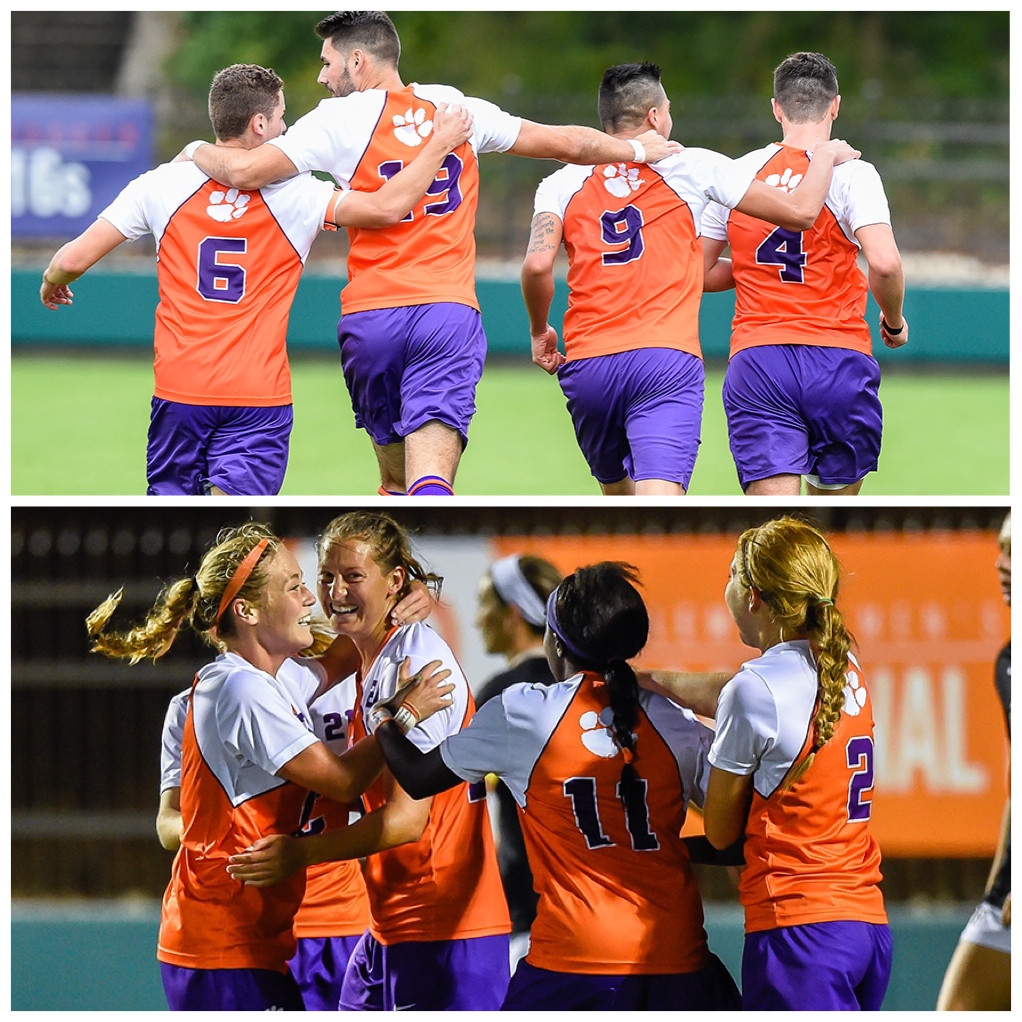 The Clemson men and women’s soccer programs celebrated the 100th anniversary of Historic Riggs Field on Friday, Oct. 2, 100 years to the date of the first Clemson athletic contest that was played at the facility. The Tigers honored their home field throughout the night with different memories from years and programs past.

One way the men’s and women’s teams honored the past was by wearing throwback kits for the games. The socks and shirts of the kits had many components that paid homage to former Clemson athletes and athletic programs. For more information on the kits, read this blog post by Sam Blackman of the Athletic Communications department.

The Tigers also created a soccer museum inside of the tennis practice facility that was open throughout the night. The museum included memorabilia from the different sports programs that have called Historic Riggs Field home throughout the years. Some of the memorabilia included ACC championship trophies, old football uniforms and helmets and a bench from the first game played at Historic Riggs Field.

Former Tiger Pearse Tormey, a member of the men’s 1987 National Championship team, which not only won the national title, but also won it at Historic Riggs Field, was honored during halftime of the night’s festivities. Tormey is being inducted into the Clemson Athletic Hall of Fame on Oct. 9 for his outstanding performances throughout his Tiger career. Tormey says he is honored and would have never had the opportunity had it not been for the support of his teammates.

“To be inducted into the Clemson Hall of Fame is a great honor, but it wouldn’t be possible without the great teammates and great coaches who came through here with me. To be recognized as an individual is certainly good, but it is only because of my teammates and coaches that I was able to accomplish the things I did. I am glad that I was able to comeback and accept the honor, and especially on a night of such significance for Historic Riggs Field.”

Between the men’s and women’s games, Clemson Athletics and the soccer programs honored Senior Associate Director of Athletic Communications Sam Blackman. Blackman has worked for the Clemson Athletic Department since January of 1982 when he was a student, and has been an integral part of the department ever since. Some of Blackman’s many major contributions to the department are his historical articles that beautifully capture and preserve a moment in time at Clemson. Blackman says he is proud of the work he has done at Clemson.

“Working at Clemson has meant a lot to me. It is a wonderful and great place and I wouldn’t want to work anywhere else. It’s a very special place to me and I am very proud of our school.”

During halftime of the women’s matchup, the Tigers gave Clemson fans the chance to win a Riggs100 commemorative soccer jersey. Four lucky fans were given the opportunity to memorize as much information as they possibly could from the pop-up soccer museum. After the memorization, the fans were asked trivia questions based on the knowledge in the museum, and at the end of the night, two lucky fans tied for the prize, and each took home a jersey.

The Tiger teams put a cap on the evening of celebration by shutting out both their opponents with 2-0 victories, over Virginia Tech for the men and Wake Forest for the women. Both the men’s and women’s teams are currently ranked in the top five in the nation, and sit at 9-1-2 (2-1-1 ACC) and 9-1-1 (3-1 ACC), respectively, with additional games coming up at Historic Riggs Field this weekend.