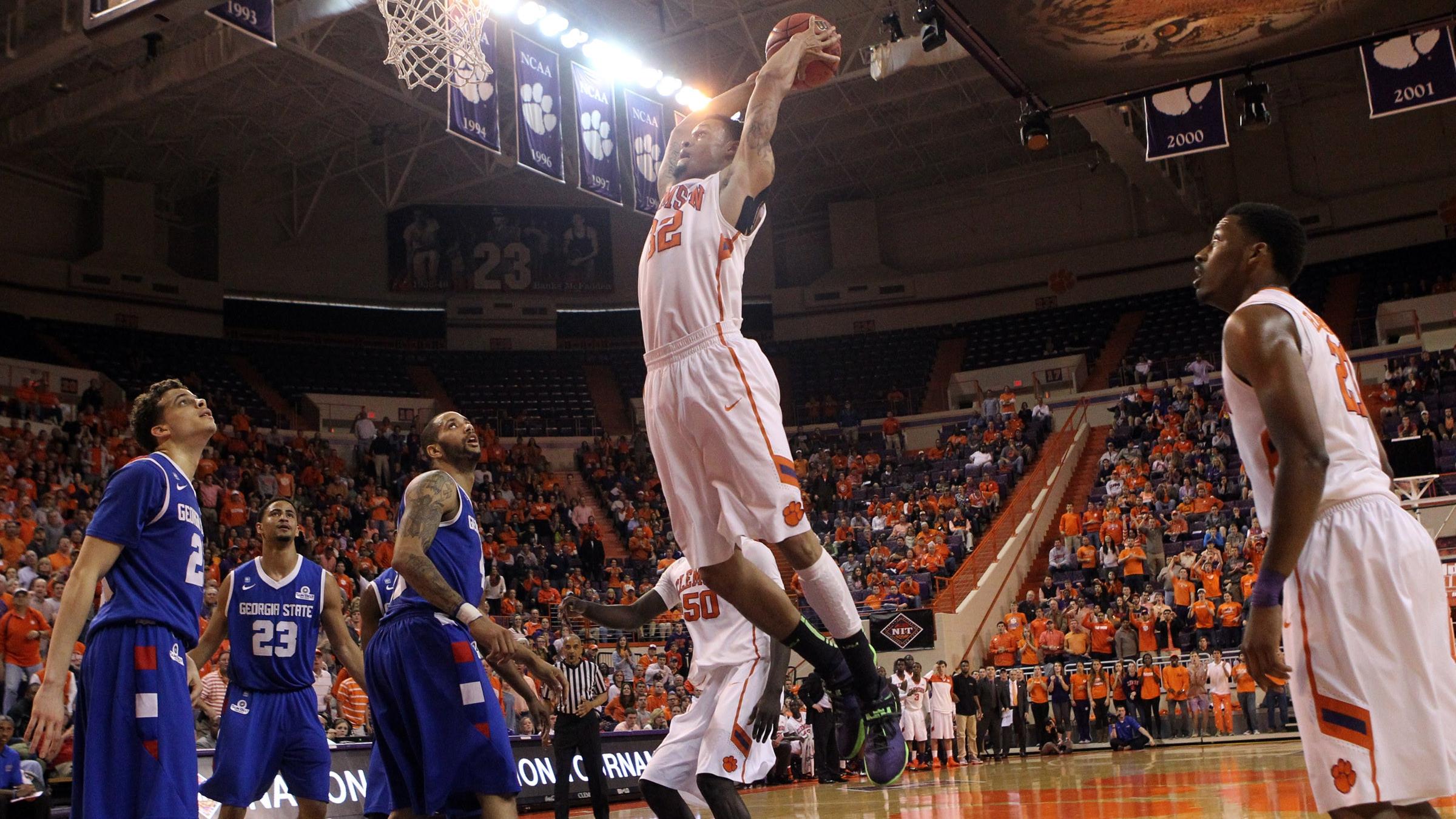 FEATURE: McDaniels Puts on a Show in Postseason Debut

CLEMSON, S.C. – In the Littlejohn Coliseum tunnel after Clemson’s 78-66 triumph over Georgia State in the NIT on Tuesday night, everybody wanted an autograph or picture with the star of the show, K.J. McDaniels.

That included a guy who put on his fair share of shows in a Tiger uniform, current Buffalo Bills running back C.J. Spiller.

After he posed for pictures with Spiller, McDaniels acknowledged it was his first time meeting the former gridiron All-American and called it “an honor.”

McDaniels scored 10 of the Tigers’ first 14 points, as Clemson marked its return to postseason play after a two-year absence by beating a Georgia State team that won the Sun Belt regular-season title in the first round of the NIT.

The first-team All-ACC selection waited three long years to play in the postseason. When his chance finally came, he wasn’t wasting any more time.

He opened the game with a three-pointer and made four of his first five shots from the field. He reached his scoring average of 17 points per game before halftime and finished with 30 points on 9-of-11 shooting, to go along with 14 boards, five blocks and three assists without a turnover.

“It was important, especially our first year going into the postseason,” he said. “I just wanted to play with confidence. We knew we couldn’t take Georgia State lightly. They’re a talented offensive team, and we were just going out there playing with our hearts.”

No player on the roster had ever played in a postseason game in a Clemson uniform, and only junior guard Damarcus Harrison – who played in the NCAA Tournament as a freshman at BYU in 2012 before transferring – had previously done so at all.

Harrison, who finished with 17 points on the night, said he hadn’t needed to bring up his previous postseason experience to his teammates before the game.

“Everybody had the right mindset, so I didn’t need to say anything,” Harrison said. “Everybody wants to win and advance and just to play as long as we can.”

McDaniels got the game off to a strong start by stroking a wing three on the opening possession, and he restored the Tigers into the lead with a reverse layup that made it 5-3 a little later.

“I thought it would be a pretty good night (after that),” McDaniels said of the opening three. “I was just going out there and doing whatever I had to do to help my team.”

McDaniels slammed one home to put Clemson up six less than five minutes in, which gave him seven of the team’s first nine points to open the night.

The junior small forward needed just 8:15 of game clock to reach double figures on a jam that put the Tigers up 14-7.

The Panthers refused to go away, however, and went on a 12-4 run to take the lead for the first time on two foul shots by Devonta White. Ryan Harrow made a jumper on the next trip to put GSU up three, 21-18, and at that point, they were on a 9-0 mini-run inside a larger 14-4 spurt.

“We had to hunker down on defense,” Harrison said. “That’s probably one of the most talented offensive teams we’ve played so far this season. Those three guards, they’re smaller and they can shoot it, and they’re fast and can get in the lane. We just used our size, and I think that helped us.”

But Rod Hall ended a scoring drought of nearly four minutes for the Tigers with a floater in the lane, and McDaniels restored the lead with a pair of free throws that made it 24-23.

McDaniels’ three from the wing made it 27-23, and his two-handed dunk in transition off a Jordan Roper assist put the Tigers up six after they had trailed by three just 1:27 earlier.

Manny Atkins made a top-of-the-key three just before the halftime buzzer to send the teams into the locker room with Clemson up three, 35-32.

The Panthers led briefly after halftime when R.J. Hunter’s steal and slam put them up 40-39. But McDaniels drove past two defenders and soared into the lane for a massive two-handed slam that put Clemson back on top 45-43, a lead Clemson never relinquished the rest of the way.

Roper’s three-point play extended the Tiger lead to five, and McDaniels’ alley-oop lay-in from Hall kept it there with 13:02 left.

A pair of McDaniels foul shots with 7:01 left stretched the Clemson lead to double digits for the first time all night, as the Tigers pulled away for the victory.

“K.J. was fantastic tonight, and I thought Damarcus and Roper were good sidekicks in the game, especially with Landry (Nnoko) getting in foul trouble and not having him for most of the first half,” Head Coach Brad Brownell said. “This was a good win against a team that is very talented and used to winning.”

The Tigers (21-12) advance to face the winner of Wednesday’s game between Illinois and Boston University. On Tuesday, a first-round win by No. 8 seed Robert Morris over No. 1 seed St. John’s meant the Tigers would play at home until the final two rounds in Madison Square Garden should they keep winning.

“It’s great (to have home-court advantage),” McDaniels said. “We didn’t get to see the game, but Coach told us about it. And that definitely boosts our confidence knowing that we’re at home, so that’s going to help us going forward in the tournament.”