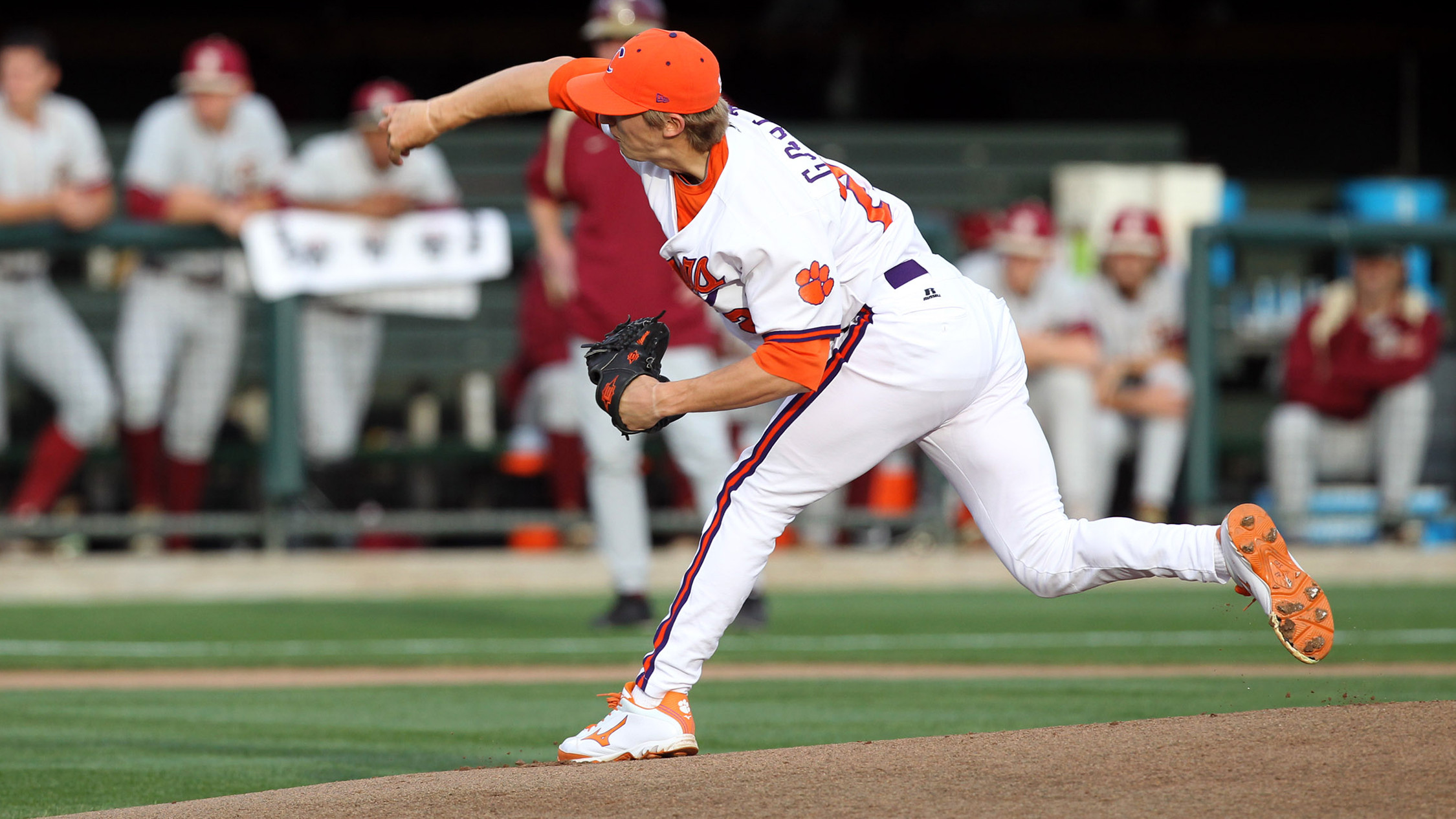 FEATURE – Gossett Shows His Stuff vs. No. 1 Seminoles

CLEMSON, S.C. – Daniel Gossett did exactly what an ace is supposed to – outduel the other team’s top gun. No small feat, in this case.

The lefty from Lyman, S.C., has been Clemson’s No. 1 starter going on two seasons, and he validated that status even further by shutting down the nation’s No. 1 team Friday night at Doug Kingsmore Stadium.

In the series opener against Atlantic Division rival Florida State, which came into the game leading the ACC with a .305 batting average, the junior pitched 7.1 innings and allowed just four hits and one run in a 9-3 win.

“I had one of the best games, if not the best game, of my career, and it just happened to be against the best team in the nation,” said Gossett. “I knew they were going to be swinging the bats – they’re a great hitting ball team – and I knew their pitcher was going to come out and try to go all nine (innings).

“I had everything rolling and everything felt good, and I was blessed to have one of those nights.”

Gossett credited his performance to an adjustment Pitching Coach Dan Pepicelli had him make in the early innings – stacking his weight over his back leg and slowing his mechanics down – and said he immediately noticed a three-mile-per-hour increase in his fastball.

“I don’t know if that was the thing I was missing,” admitted Gossett. “But Coach Pepicelli was on it, and that’s why I think he’s one of the best coaches in the nation.”

Touching the mid 90s on the radar gun, Gossett also kept the Seminoles off balance with a nasty breaking ball and deceptive off-speed pitches. He improved to 2-0 on the season with the win and bettered his ERA to 2.50.

“‘Goose’ pitched really well tonight,” said Head Coach Jack Leggett. “He was in charge. We got a little momentum early in the game offensively, and we swung the bats well. And we played good defense, and the combination of those three things allow you to play well against a good team.”

The Tiger bats played no small part in the victory, as the they knocked around Seminole ace and reigning ACC Pitcher-of-the-Week Luke Weaver for 11 hits and six runs in 7.0 innings pitched to hand him the loss.

Florida State posed the game’s first threat with a runner on third and one out in the second inning. The Seminoles put on the squeeze bunt, and John Nogowski’s bunt hit off the plate hard and came back to Gossett, who bounced off the mound and backhanded the ball home to cut down Jose Brizuela.

Chris Okey gave the Tigers their first runner by hustling to beat out a grounder, and Steve Wilkerson laced a drive into the gap for a double to put two runners in scoring position.

Shane Kennedy ripped a liner off the body of Weaver and Okey came home from third to put Clemson on top 1-0 in the bottom of the second. The Tigers doubled their lead when Weaver balked to bring in Wilkerson.

Garrett Boulware made the lead 3-0 with two outs in the home half of the third as he blasted a Weaver fastball over the fence in center just left of the 390-foot sign.

“I honestly have no idea how that happened,” said Boulware. “That’s the furthest ball I’ve ever hit at this park, and I was not expecting it at all. I was expecting it to be a line drive, and it just kept going. I’ll take it.”

Jameis Winston got a run back for the Seminoles in the fifth inning with a run-scoring single. The Heisman Trophy quarterback for Florida State’s football team came into the contest hitting just .188 on the season.

The Tigers stretched their lead in the bottom half on a double by Tyler Krieger that brought home Tyler Slaton from second after Winston kicked the ball in the outfield.

Boulware singled back through the box to bring home Krieger, and two batters later, Okey ripped a drive into right field to score Boulware and increase Clemson’s lead to 6-1.

“It’s unbelievable the way we’re swinging the bats right now, and that makes it 10 times easier to pitch,” stated Gossett. “When you have a cushion, it’s not as stressful. So if we can keep swinging it like that, I think we’re going to be in pretty good shape.”

Gossett issued a pair of two-out walks in the sixth inning as the Seminoles tried to mount a rally, but the Clemson ace got Winston to bounce out in front of the plate to end the threat.

Clemson added another run in the eighth inning when Jay Baum‘s sacrifice fly scored Wilkerson, and two more runs scored when Winston could not corral Krieger’s liner to left on a diving attempt.

Despite throwing 124 pitches – 74 for strikes – Gossett got stronger as the game went on and retired the last five batters he faced.

“He was throwing really good tonight,” said Boulware, who was behind the plate for the gem. “He had a lot of life under his ball, and he was whipping it in there.”