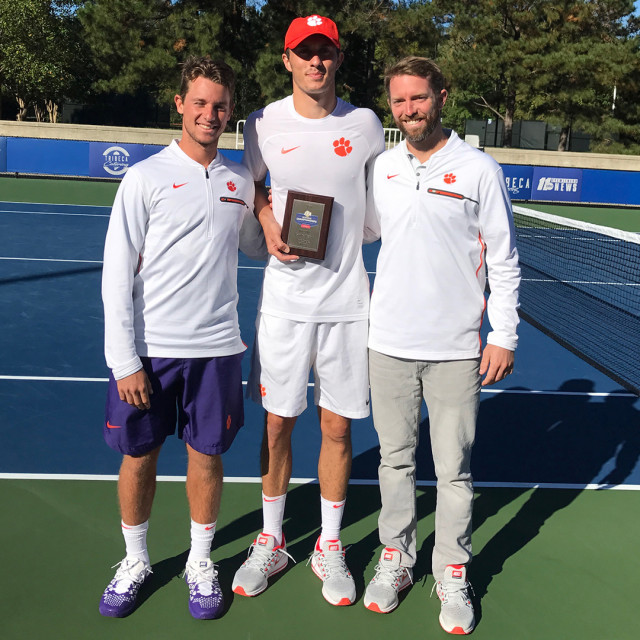 Favrot and Baudry Raise the Bar at ITA Regional

CLEMSON, S.C. – The Clemson men’s tennis team had a breakout ITA Regionals in Cary, N.C. The Tigers were the only team in the region to have two athletes advance to the semifinals in the singles draw.  Led by Alex Favrot and Simon Baudry, the Tigers put their stamp on the team’s best finish at the ITA Regionals in decades. “Our focus going into the tournament was on our routines and rituals, and competing for every point.  Winning was never stressed, but each guy defined what success looked like for them and tried to execute that plan.  We have a hard working, focused group, and I was pleased they got to see the fruits of their labor,” said Head Coach John Boetsch.

Senior Favrot led the way in the ITA regional, advancing to the championship final in the singles and qualifying for the Oracle ITA Fall National Tournament. On his way to the championship, Favrot did not give up a set until the championship match. In the quarterfinals, he defeated top seed and former top 10 ranked Nico Alvarez of Duke, 6-3, 7-6 (4) to advance to the semifinals. In the semifinals, the Lyon, France native defeated Bar Botzar of Wake Forest who had a career high 482 ATP ranking, 6-2, 6-2.  “Alex and Simon were on a mission and in the process of having a great tournament moved our program forward.  Their sole focus has been staying locked into the process in competition and it showed with both of their performances here this week.”

Sophomore Baudry, a new addition to the Tigers had a breakout performance as he advanced to the semifinals after defeating Thomas Mayronne of South Carolina, 6-1, 3-0 retired. The Bordeaux, France native fell to Patten in the semifinals, 6-4, 6-2.  Coach Boetsch responded to Baudry’s tournament by saying, “I’m pleased with Simon’s improvements over the course of this fall and how his transition into our program has happened so smoothly.  He has been a great new addition to our program and we believe that his best tennis is in the near future.”

Other Tigers in action at the ITA Regional were Sam Edwards, Marshall Dagostine, Carlos Kelaidis and Beau Pelletier. Edwards and Kelaidis advanced to the second round, before being upended by players from UNC and Duke. Dagostine and Pelletier both fell in their first matches, Pelletier went on to win his next two matches in the consolation singles draw.

“We will head back to Clemson, process this week, and move forward staying focused on our goals.  This has been one of the best Regionals our program has put together in a while and we are excited to get back to work in preparation for the upcoming weeks.”

The Tigers are back in action on November 1st when Alex Favrot begins play at the Oracle ITA Fall National Tournament.