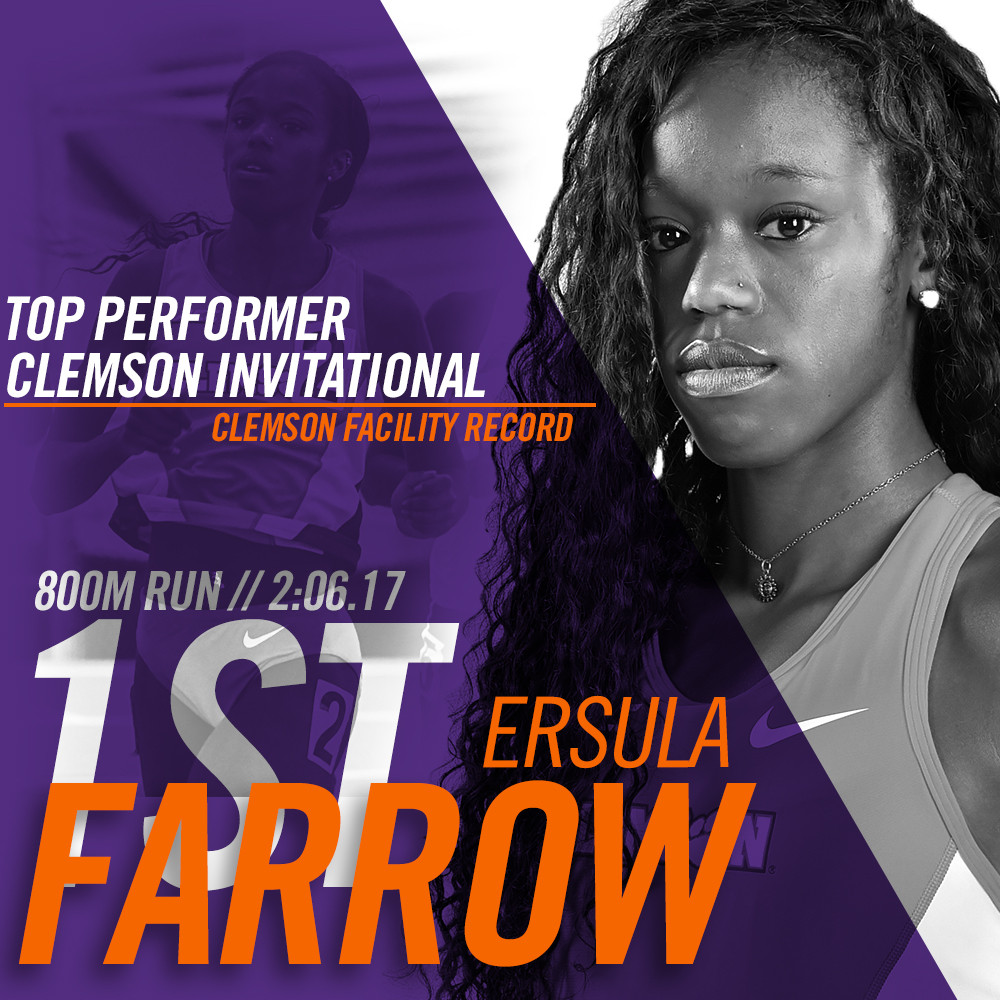 CLEMSON, S.C. – All eyes were on Ersula Farrow on Saturday as she ran the fastest 800 meter time in the country to claim the Clemson Indoor Track and Field Complex facility record in the Clemson Invitational. The performance marks the fourth record broken this season by a Tiger and the eighth facility record broken within the first two weeks of Clemson unveiling its new indoor track.

Farrow finished the 800 meter run in 2:06.17 to win the event and move from eighth to fourth on Clemson’s list of all-time greatest indoor performances in the 800 meter run. The time stands as the fastest time in the country by .43 seconds.  She was followed by Imani McGowan in second at 2:12.30 with Lakeisha Warner right behind her in fourth at 2:12.62.

Malayshia George also won her event, completing the 500 meter run in 1:12.85 to position herself fourth in Clemson history. Like George, Ranee Ricketts won her event as well, clocking in at 7.39 in the 60 meter dash finals. The time places her eighth in program history while Angelica Collins finished second with a personal best 7.40 to place her ninth on Clemson’s all-time list.

In the 60 meter hurdles, Markeeta Thomas was the runner-up with a time of 8.38. She entered the finals with the top time as her personal best 8.32 was good enough for the 12th fastest time in the country and the ninth fastest time in program history. Rebekah Smith followed up her impressive debut last week with another standout performance in the 200 meter dash. The freshman registered a personal best 23.93 to place second in the event with the ninth fastest time in the country. Olivia James finished the 400 meter run third at 54.75 prior to leading Thomas, Warner and George to a first place finish in the 4×400 meter relay with a time of 3:41.69.

In the field, Iana Amsterdam registered the sixth best mark in the country when she leaped 42-6.75 to win the triple jump. Anasterasia Terrell took third with a mark of 40-9.5 while Breaisha Morton placed fourth in the event. In the weight throw, Majayla Holland threw a personal best 51-3 to take fifth place.

On the men’s side, Mpho Makofane perhaps ran the Tigers’ best race, finishing the mile in 4:08.63 to register a personal best and finish first overall. The time stands as the 13th best time in the nation. Cordell Lamb won the 300 meter dash with the second best time in program history, clocking in at 33.50. Chad Fennell also walked away from the Clemson Invitational with a first-place effort as he finished the 800 meter run in 1:53.68. Oliver Lloyd wasn’t far behind in fourth place with his personal best 1:54.36.

Chris McBride wasn’t far off his Clemson record in the long jump, this time winning the event with a leap distancing 25-0.5. Jordan Pickerel walked away with a victory in the weight throw, throwing 57-0.25.

The Tigers next test awaits in Kentucky at the Rod McCravy Memorial. The meet is set to take place On Saturday, January 20 at Nutter Field House in Lexington, Kentucky.