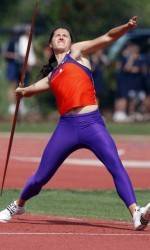 WINSTON-SALEM, NC – Clemson freshman Karine Farias completed a two-day heptathlon on Wednesday at Kentner Stadium on the campus of Wake Forest University. The native of Brazil amassed a total of 5,085 points and finished third in the field of 15 competitors. She was the top ACC finisher among eight student-athletes.

With her performance, Farias became the eighth female in Clemson history to surpass the 5,000-point mark. While her bid to qualify for the 2010 NCAA Outdoor Championships in the heptathlon came up short, her point value puts her inside the nation’s top 35 individuals.

Farias was able to work her way up through the ranks after a bit of a slow start to the competition. She came out in the 100m high hurdles with a time of 15.44, and then struggled in the high jump with a clearance of 5’3″. She ended Tuesday’s portion of the heptathlon with a mark of 35’2.5″ in the shot put, followed by a solid time of 26.58 in the 200m dash.

The second day – which featured the final three events – was a successful one for Farias. She finished third among the group of participants in the long jump after hitting a mark of 18’5.75″. Her best event of the day was the javelin, where she turned in a season-best throw of 133’10”. In fact, her mark in the javelin ranks sixth on Clemson’s all-time performance list. She then closed out with a season-best time of 2:20.26 in the 800m run.