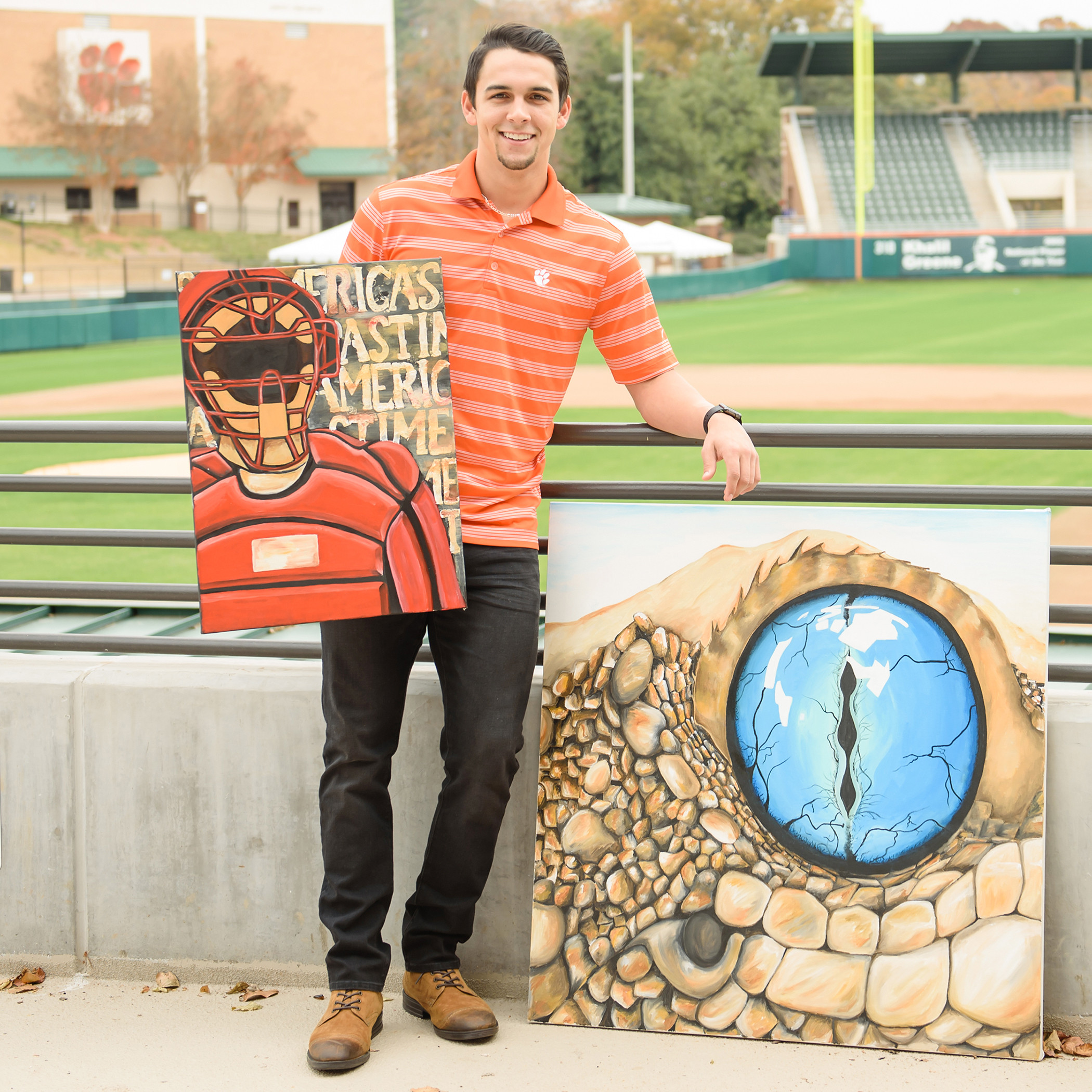 Eye of the Tiger

Chase Pinder attacks baseball and art the same way…one piece at a time.

“In baseball, I have to get things done a certain way,” the junior outfielder said. “I have to finish one thing before I do another thing. And in art, I will not work on two pieces at once. I have to finish the piece I’m doing before I can start a new one. Relating it back to baseball, I go to the cage first, I’ll finish my hitting and then I’ll work on something else. So the way I go about both is pretty similar.”

In addition to finding on-field prowess during high school, Pinder also excelled in the art classroom, honing in his realism style and creating a portfolio for AP art class.

“I started in middle school, and I was always decent at it. I had a teacher named Paula Bennett, and she was the wife of my baseball coach in high school. I always took her classes, and she pushed me to do AP art in high school. I did it, and I got a four on the exam. I had some good artwork from that year.”

Pinder still enjoys drawing and helping his little sister with her art projects, but now his focus is on his baseball career as a Tiger. The Poquoson, Va., native comes from a baseball family. While his father pitched at Florida State and his brother, Chad, played at Virginia Tech, Chase knew he wanted to do something different for his college experience.

“I was offered by Virginia Tech, and they were probably my second choice,” he remembered. “We’ve always liked Virginia Tech, and I didn’t know much about Clemson, but it was always a team I had watched on TV. It was a cool place I didn’t know much about. So I started to look more into Clemson and reached out to the coaches, and they ended up offering me.

“I was torn between the two, and it basically came down to that I wanted to do something different than my brother. I didn’t want to follow in his footsteps, I wanted to start my own path, and it landed me here, and it’s been awesome. This was definitely the right choice for me.”

Chase, who is affectionately nicknamed “Poody” by his brothers, got involved with baseball because of his father, and the son is greatly appreciative of the support his father has provided throughout his athletic career.

“He’s about as supportive as it gets, and I wouldn’t be where I am without him,” said #5 of his dad. “He’s always been that way. I was really into football when I was little, and I went to some quarterback camps in San Antonio and places like that, so he didn’t restrict me to baseball. He let me do what I wanted to do, and he’s given me every opportunity to succeed. I thank him for everything that I’ve accomplished.”

Chad offers a bit of a different kind of motivation. The brothers have a competitive relationship, constantly pushing each other to be the best they can be. And that culminated back in August when Chase and his father attended a game between the Texas Rangers and Oakland Athletics, and Chad was making his MLB debut for the latter team. For Chase, it was a moment he will never forget.

“That moment was crazy. When I was there, I see him on the field in the Rangers stadium, and I’m like, ‘We have spent so many hours in the Poquoson High School batting cage with my dad,’ and he was in that cage with me, and now he’s here. That is so crazy.

“He’s one of the hardest workers I know, so he deserves every bit of it. I always knew he was going to make it. He’s just one of those guys who won’t let himself not make it. He works hard. He’s a baseball guy and is about as talented as it gets. I’m so happy for him, and hopefully he can make the 40-man roster this year.

“It’s exactly where I want to be,” said Chase of how seeing Chad’s debut motivates him. “I’ve always looked up to my brother, and this is another thing to look up towards. It drives me. The competitor in me wants to play against him. I’ve never been able to play against Chad, and ultimately, that’s the only way I’m going to be able to. I hope I can play against him eventually, and I know it takes time and is a process, but I’m ready to do it.”

But before the brothers can face off, Chase knows he has to first focus on the rest of the time he has as a Tiger, and he is looking forward to seeing what the team can do in 2017.

“If I can help us win as many games as possible for the team, I’m having a good year,” he said. “I don’t focus on wanting to hit .300 or 10 home runs, I focus on the fact that if we’re a 40-win team this year, I most likely have had a pretty good year. I’m not worried about individual stats, because if we’re winning, I’m happy, and hopefully that translates to individual accomplishments.”

He also knows that as a junior and one of the veterans of the ACC championship-winning team, he will have to be one of the leaders, and that is a challenge he is looking forward to.

“I’m more of the even-keeled guy that, no matter if we’re down by 10 or up by 10, I’m going to be the same. People can look to me to maybe not get so low if they make an error…just staying even-keeled, and that’s how a season has to be. I think we did a good job of that last year, and it leads to having a steady year like we did, and ultimately a 40-win season like we want to have.”