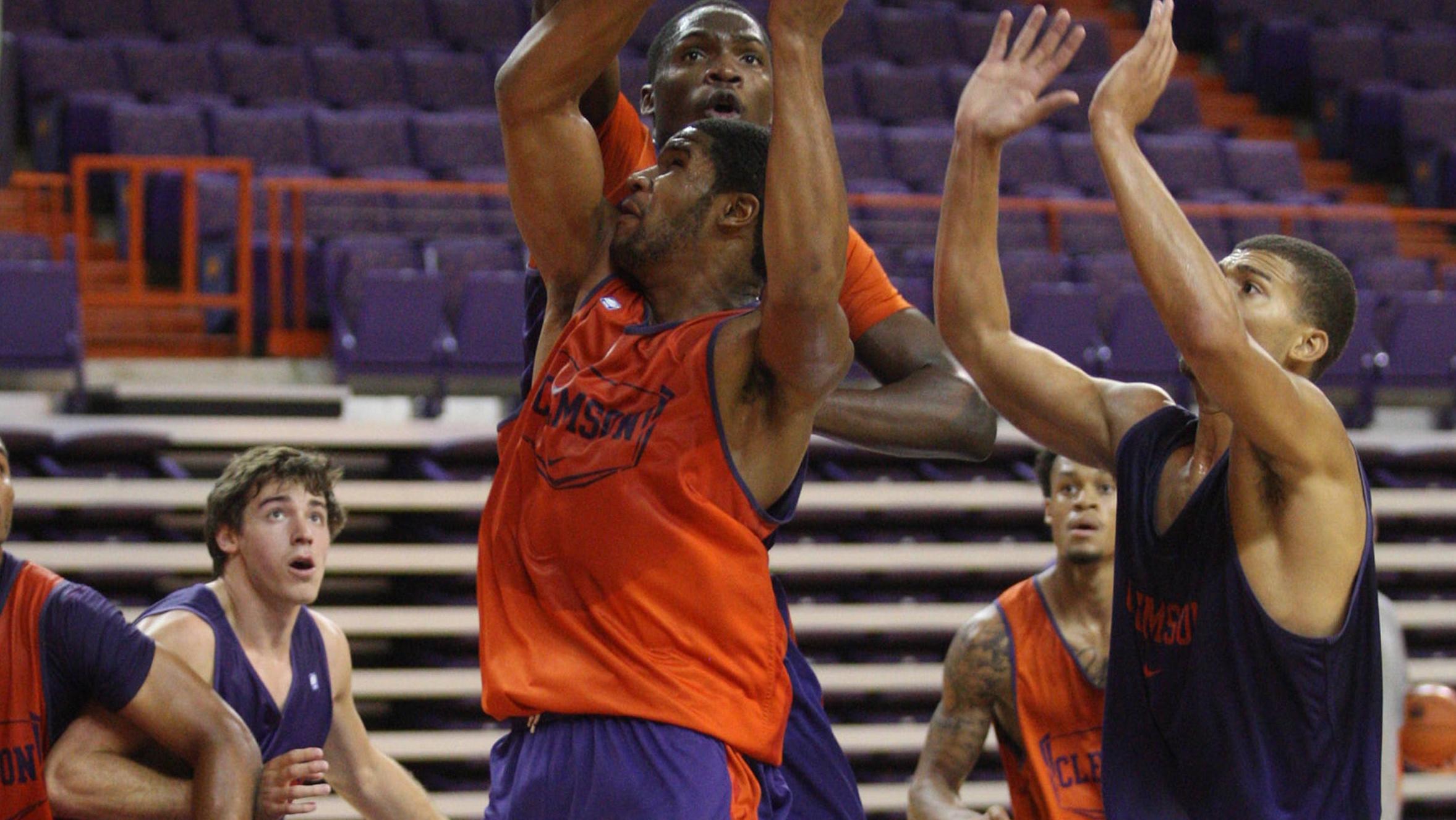 CLEMSON — Ask Milton Jennings to assess the 2012-13 Clemson men’s basketball team, and the senior forward has no trouble finding the right word: “Young,” he laughs. The Tigers have eight returning lettermen from last year’s squad that finished 16-15 overall and 8-8 in ACC play, but of that group, only Jennings and fellow senior post player Devin Booker are upperclassmen. The six other veterans are all rising sophomores and the remaining six members of the 14-man roster are newcomers to the team, meaning Clemson will need some of those unproven players to become contributors if it hopes to achieve its goal of returning to postseason play after a one-year hiatus. “The freshmen are going to have great games, and they’re going to have bad games,” Jennings said. “And we’re hoping they are going to have more good games than bad. Devin and I look forward to stepping in and covering those holes, the few holes that we have, on defense, rebounding and scoring around the rim and outside.” Brad Brownell enters his third season at the helm of the Tigers, who had held only individual workouts — the NCAA allows two hours a week of individual instruction from the start of the fall semester until the week of Sept. 15 — before holding the first of their biweekly team drills Sept. 19 ahead of the start of practice Oct. 12. And while the Tigers have only recently started working together as a team, Booker said Brownell had made it clear to he and Jennings that the onus is on the senior duo to guide the squad where it needs to go. “He tells us every day that we’re going to have to step up and be leaders,” Booker said. “He knows that we have a young squad this year, and Milt and I are the only old heads on the team. So we’re going to have to push these younger guys to become better players every day.” Even though they have only had the chance to practice with their new teammates in the context of brief workouts, Jennings says he is encouraged by what he has seen out of the newcomers. “As far as big men, Landry (Nnoko) looks really good,” he said. “He’s really long, and I think he’ll be able to come in and play right away, mainly because of his defense. In about two years, I believe he’s going to be a special one. “Josh (Smith) is another freshman big man. If he just works on his athleticism in general, he’s already got the skills that you want — the pump fakes, drop steps and footwork.” While perhaps the most ballyhooed of the Tigers’ incoming players, 6-foot-7 wing Jaron Blossomgame, is still recovering from a broken leg and hopes to contribute this season, Jennings has been impressed with the other new perimeter players. “Adonis Filer and Jordan Roper, they both have good speed coming off screens, but they both have to continue to work,” Jennings said. “They’re not as big as most guards they’re going to play that are going to use physical strength against them. But one advantage they have is quickness, getting in the paint and using their explosive ability to finish around them rim or find us down low.” Clemson received another piece of encouraging news Wednesday, as it learned that guard Damarcus Harrison had been granted a waiver by the NCAA allowing him to play this season. Harrison transferred after one year at Brigham Young University after learning his Mormon mission had been delayed and BYU no longer had a scholarship available. The 6-foot-4 Palmetto State native averaged 3.2 points per game in 8.8 minutes per game last season and scored a career-high 12 points in an NCAA Tournament win over Iona. Brownell said the sophomore would give the Tigers a big boost in terms of depth, as sophomore guard Devin Coleman was likely lost for the season to a torn Achilles, in addition to Blossomgame’s aforementioned injury. “(Damarcus) is kind of a jack-of-all-trades perimeter player,” Brownell said. “He has size, can make a three and drives pretty well to the basket. He plays with reasonably good poise, and just needs to continue to get in better shape and more comfortable within our system.” The Tigers will hold their annual event to celebrate the start of the season, Rock the ‘John, Oct. 19 at 8 p.m. They will then host Lander in an exhibition game Nov. 5 at Littlejohn Coliseum, before officially opening their season Nov. 12 at home against Presbyterian College. As for the goal for this season, both Booker and Jennings agreed there was only one: returning to the NCAA Tournament, which the Tigers missed out on last season for the first time in five years after notching their first win in the Big Dance since 1997 in Brownell’s first year as head coach in 2011. “That’s definitely been on our minds,” Booker said. “We didn’t finish the season like we wanted to last year, and it left a bad taste in our mouth. But we talked about it, and it’s just going to have to come with hard work. Over the summer we put in a lot of hard work, and during the school year we’ve been busting our tails trying to get back in shape. “Hopefully, everything will just fall into place, and we’ll get to where we want to be.”