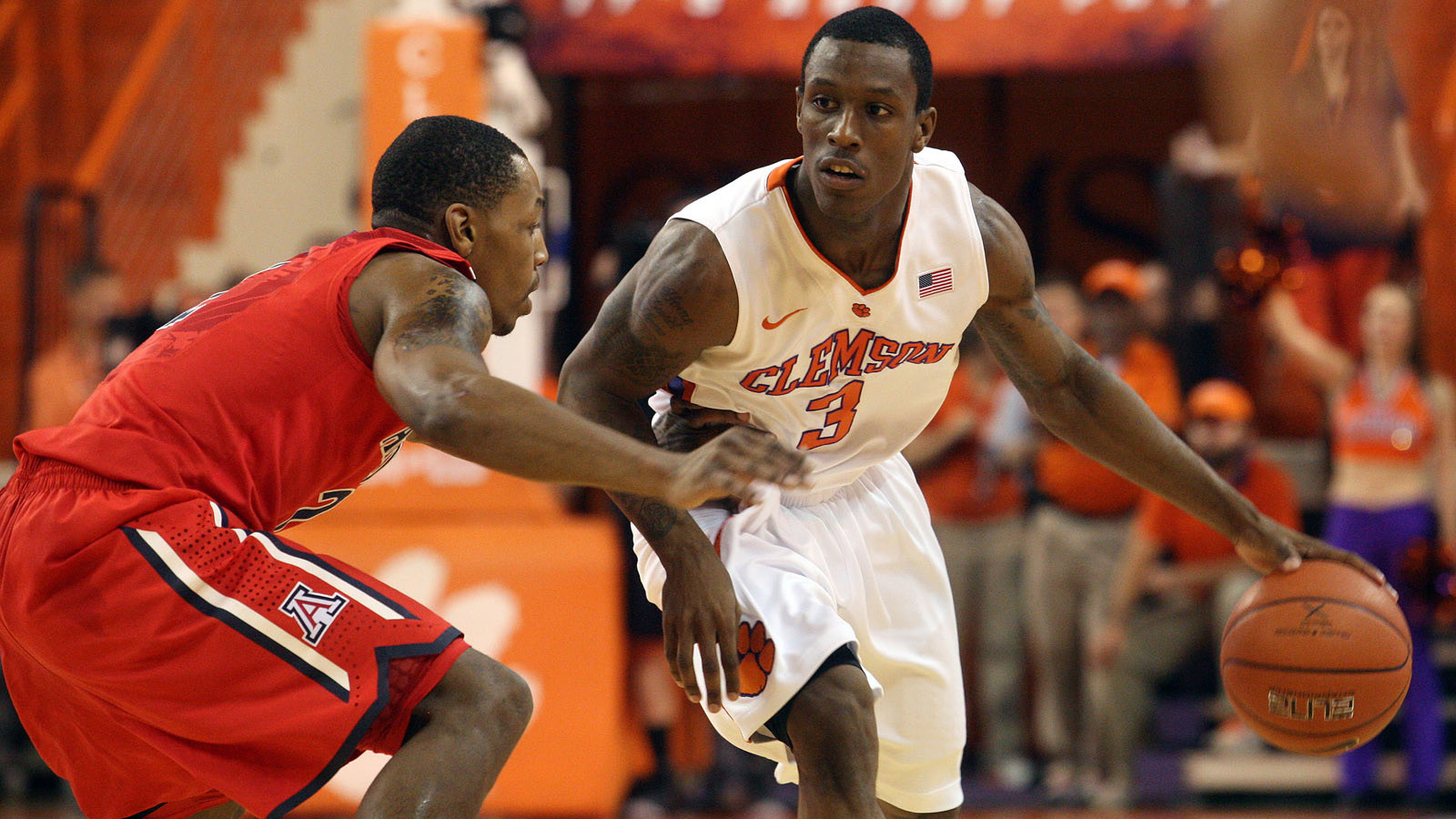 CLEMSON, SC — Adonis Filer said he and Jordan Roper have spent a quite a bit of time discussing how excited they are for Atlantic Coast Conference play to begin. Tomorrow afternoon, the wait is officially over for the Clemson freshman guards. And while neither is expected to be in the starting lineup when the Tigers (8-4) host defending ACC Tournament champion Florida State (8-5) at 4:00 PM at Littlejohn Coliseum, Filer believes they are ready for the challenge of playing in one of the nation’s elite leagues. “I think Coach (Brad Brownell) has prepared us very well for that by playing us in big games, like Arizona and Gonzaga and other games on our schedule,” Filer said Friday. Filer is coming off easily the best game of his young career, as he scored 21 points on 7-of-7 shooting, including 4-for-4 from three-point range, in a 92-51 win over The Citadel on Tuesday. Roper, meanwhile, has scored double figures in three of Clemson’s last four games, with a high of 16 against Florida A&M. “I believe our freshman guards have picked it up a lot, Adonis and Rope,” sophomore forward K.J. McDaniels said. “They have come a long way, and they work very hard. To have them come along and give us some scoring, it really helps us out a lot.” A third newcomer to the Tiger backcourt this season, sophomore transfer Damarcus Harrison, is likely set to make the third start of his Clemson career at the two-guard spot. Harrison scored a career-high 15 points in a 77-41 win over South Carolina State on Dec. 15. “It’s been significant that Damarcus had a really nice game recently, and Jordan’s had a couple good games, and for Adonis to make some shots,” Brownell said. “That was good for those players that are new to have those kinds of games, and obviously it’s one of the reasons we scheduled some of those opponents.” But while the Tigers come into their ACC opener off consecutive wins by a combined margin of 77 points, Brownell wasn’t ready to say his young team had exorcised the demons that proved costly in a loss to Coastal Carolina on Dec. 19. “Basically, we’ve played better against teams that we should beat, and we’ve beaten them handily,” Brownell said. “We’ve done what we’re supposed to do.” Florida State comes into the game having lost its most recent contest at Auburn, 78-72, Thursday. The Seminoles are led by 6-foot-5 senior Michael Snaer (16.3 points per game), but like Clemson, are otherwise very young in the backcourt. Unlike Clemson, however, that youth has manifested itself in turnovers — the ’Noles have turned the ball over an ACC-worst 16.3 times per game this season, while the Tigers lead the league at 10.9 turnovers per game and are second in turnover margin at +3.8 per game. Clemson’s leading scorer and rebounder Devin Booker (11.3 points, 7.3 rebounds) missed practice Thursday with an ankle injury he tweaked in Tuesday’s win, but Brownell classified the senior big man as “probable” for the game against the Seminoles. “I’d be shocked if he can’t play,” Brownell said. “He moved on it a little bit yesterday, and there wasn’t much swelling after. He’s gotten treatment the last couple days, and hopefully he’ll feel better and should be fine by tomorrow.” Clemson has won 10 of the last 11 meetings with FSU at Littlejohn Coliseum — most recently by a margin of 20 points last year — and four of its last six overall against the Seminoles. But Brownell admits with the youth of his team, he has very little idea how they will respond when they tip off ACC play Saturday afternoon. “Early in the season, there’s going to be times when guys don’t play as well, and we have had that happen a couple of times with Purdue and Coastal,” Brownell said. “Then there have been times when we’ve played very good basketball. We played probably 30 minutes of good basketball against Arizona, and we played 35 minutes of good basketball against Gonzaga.  “At this stage of the season, you’re still trying to see what you have and if your guys can be consistently good. That’s the biggest challenge for teams…to consistently play at a high level.”