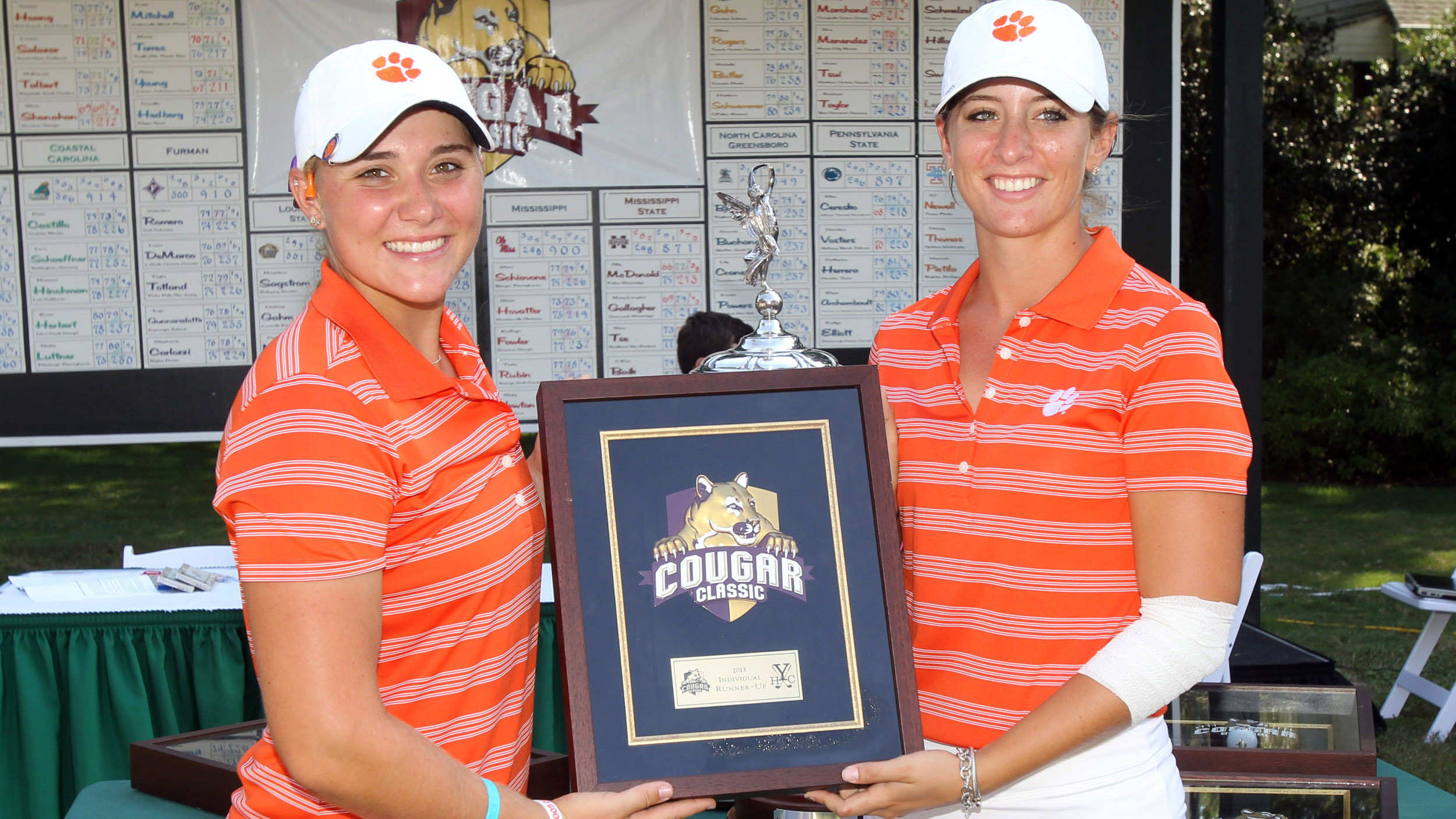 HANAHAN, SC – With a coastal breeze blowing through the Spanish moss hanging from the trees outside Yeamans Hall Club shortly after the Cougar Classic ended Tuesday afternoon, J.T. Horton lingered for a moment to stare at the one stroke that separated his Clemson women’s golf team from victorious Florida on the final leaderboard.

But the sting of seeing the single shot that kept his Tigers from notching their first-ever win in their first-ever tournament as a program was just about the only thing Horton had to be disappointed about with his team’s debut.

“We gave ourselves a chance coming down the stretch,” he said. “At the beginning of the week if you’d told me we were going to take a second-place finish with all five (of our players being) freshmen, I’d have probably taken it. I know the girls are a little bit disappointed, but we can also learn from this and find a way to use a little bit of a taste of what we can expect in the future and how we’ve got to get there.”

The Tigers were only fractions of an inch from getting there this time.

Ashlan Ramsey‘s birdie putt from about 12 feet straight up the hill on the 18th green lipped out, and a few minutes later Sloan Shanahan‘s attempt at birdie from about five feet burned the top edge of the hole.

Those two shots were all that stood between the Tigers and the title, and the same could be said for the two golfers’ hopes of claiming individual medalist honors, too.

Ramsey and Shanahan finished in a tie for second place at four-under par with a three-day total of 212, just one shot behind Florida’s Anna Young, who fired a final-round 67 to finish at five-under.

“I know both of them are disappointed with how they finished on the last three holes,” Horton said. “Sloan was one-over and Ashlan was two-over, and both of them lipped out a putt on the 18th hole that could have gotten them into a playoff. So I know they’re going to be disappointed, but those are two players that had a fantastic week. They are going to be the backbone of this lineup for the next four years.”

Shanahan got the program off to a strong start two days earlier by striking the first shot in the program’s history, splitting the fairway on the par-four first hole at Yeamans Club. She then hit the green with her approach and sank the putt to make the first birdie in program history.

“It was so much fun,” Shanahan said. “I had a blast. It was such an honor, and I was so grateful that Coach Horton allowed me to do that. It was a really cool feeling. There was a lot of hype, a lot of adrenaline. I think it was probably the biggest drive I’ve ever hit on that first tee because I had so much adrenaline pumping through me. I couldn’t ask for anything more for our first experience out here.”

Clemson took a six-shot team lead into the final round, but the lead evaporated with a charge by host College of Charleston, and the Tigers trailed by one shot going to the back nine.

But McKenzie Talbert crushed a drive on the 422-yard, par-five 15th and then hit a fairway wood into the middle of the green to give her an eagle putt. The putt was about 20 feet, down a slope and back up another, and Talbert drained it, giving an emphatic fist pump to the sizable contingent of Clemson fans gathered at the green.

Two groups later, Ramsey got up and down from the front apron on the same hole and gave a similar fist pump as the eight-foot birdie putt hit the bottom of the hole.

“About midway through the round I told them that we needed to pick up a couple of shots, and we had four birdies and an eagle in about a three-hole stretch,” Horton said. “So that right there shows you what kind of competitors we’ve got. I feel very good about the future of Clemson women’s golf moving forward.”

But Florida finished strong, as its counting players played the final three holes in three-under par, while Clemson’s played the stretch from 16 to 18 in three-over par.

“I feel like we kind of came in as the underdogs and no one really expected us to be leading after the first two days,” Ramsey said. “I think a lot of it requires experience, and obviously this is a great learning experience for us to learn how to handle some of the pressure and some of the factors that come into winning at the collegiate level.”

Lauren Salazar was Clemson’s third top-20 player for the event with a 218 score and a 19th-place finish after a 75 on Tuesday.

Talbert was Clemson’s second-best player on Tuesday with a 73.  She was the only player in the field with two eagles in the tournament and finished at 221, good for 37th place. Jessica Hoang shot a 77 on Tuesday to finish at 227.

The 20-team tournament field included five teams that finished in the top 25 at the NCAA national tournament last year and 12 that played in the NCAA regionals.

Horton was officially announced as the program’s first-ever head coach on August 23, 2011, and just more than two years later, was able to reflect on how it felt for his Tigers to finally take the course together as a team.

“Anytime you’ve got 27 or 28 months off from coaching and get to come back and play in what I think is one of the top two or three college events in the country…we’re very fortunate to be here and we’re excited about what we’ve been able to do,” Horton said. “I’m happy to be back on the course with these ladies.”