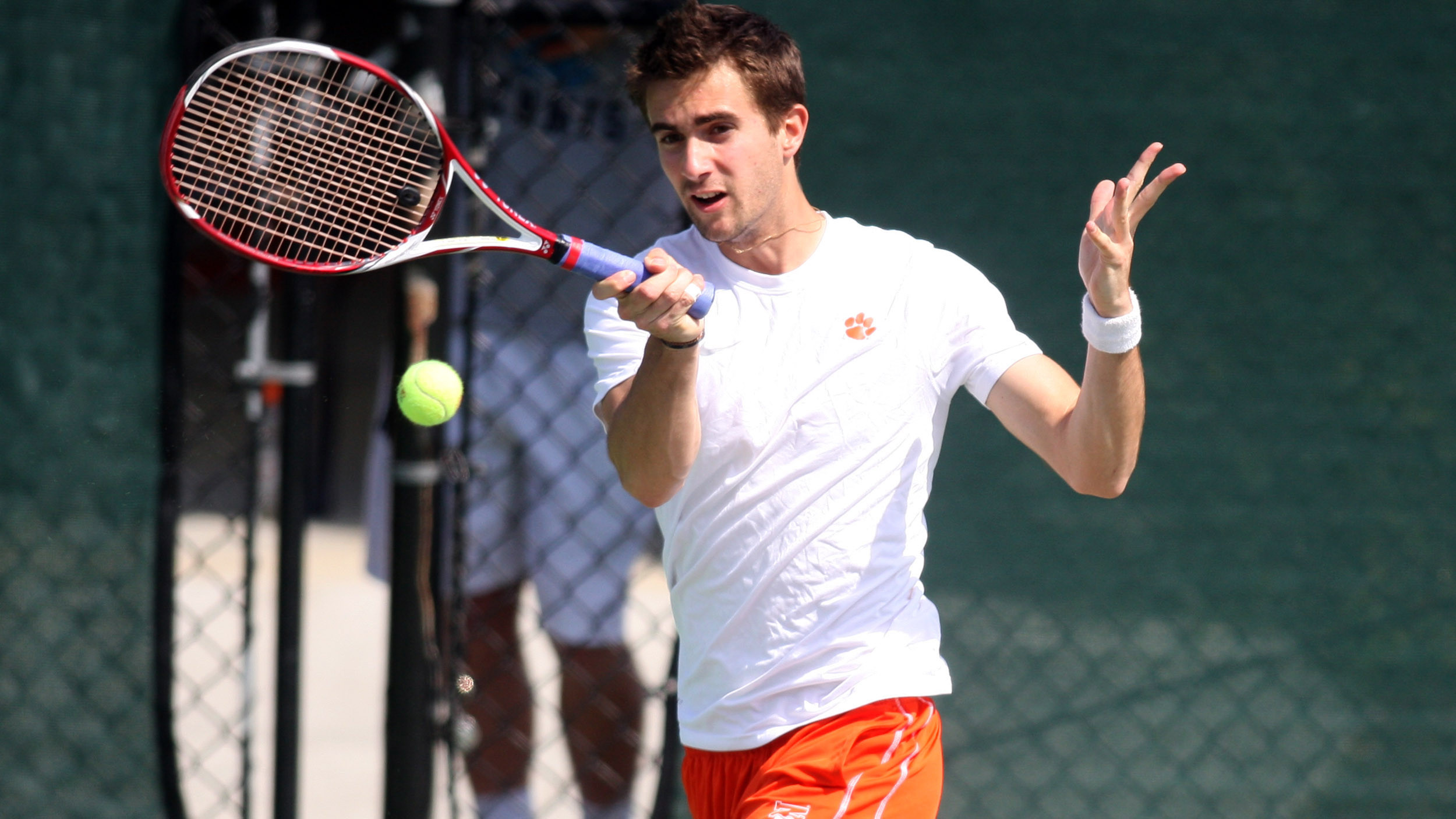 EXCLUSIVE: Tigers Show What They’re Made of Against UNC

CLEMSON, SC – After Clemson dropped the doubles point to North Carolina on Sunday, assistant coach John Boetsch delivered a succinct message to the team: “We’re going to find out what we’re made of today.”

What the Tigers found out is they are made of awfully stern stuff, as they passed the test of mettle with flying colors by sweeping the singles matches for a 6-1 win at the Hoke Sloan Tennis Center, their first victory over the Tar Heels since 2005.

“The reasoning behind it is I want them to have pride in themselves and each other,” Boetsch said of his message. “We wanted to keep it simple and just challenge them.”

The clean sweep in singles marked the first time Clemson has swept all six singles matches against the Tar Heels since April 23, 1989, almost 24 years ago, when the Tigers defeated North Carolina 8-1 in the finals of the ACC Tournament.

While the Tar Heels are not ranked in the latest ITA Poll, Clemson head coach Chuck McCuen said their illustrious tennis history made it a landmark win for his program, comparing it to the Clemson football team’s win over LSU in the Chick-fil-A Bowl.

“I’ll never forget sitting behind the end zone, we were probably in the third or fourth row when we kicked the field goal to beat LSU,” McCuen said. “I’ll never forget how proud I was, and it was really exciting when (head coach) Dabo (Swinney) said that Clemson football was back and that they had crossed the Jordan River.

“That win, that was that crossing. And for me personally, beating such a solid and talented and consistently great North Carolina program, I felt like Clemson men’s tennis had sort of crossed the Jordan River. It’s not about who was ranked where, it was about Clemson competing against North Carolina.”

And while the victory may have seemed resounding, it certainly didn’t come easily. Clemson dropped first-set tiebreakers at No. 3 and No. 5 singles before Gerardo Meza and Zachary Rigsby, respectively, rallied to win two straight sets to win their matches. Austin Ansari also won a three-set match, outlasting his opponent to win 6-1 in the third after dropping the second.

“That’s been our word all year: persevere,” McCuen said.

Hunter Harrington and Dominique Maden also won their matches at No. 2 and No. 4 singles in straight sets, with the latter finishing off his opponent 6-1, 6-1 before his older brother, Yannick, had even completed the first set of his match.

The win also represented a tremendous show of resiliency for the Tigers, who were beaten 7-0 on their home court two days earlier by No. 9 Duke.

“It was a huge bounce back,” McCuen said. “I told the guys, ‘The average person who reads it in the paper or was only here for a short period of time didn’t really see the complexities of that match.’ The score said 7-0, but it was a much closer match than that. And I think the guys took that as a learning curve. We came back after that loss, and Coach (Boetsch) had them doing some amazing things to get better, to keep tweaking their games to make them a little bit stronger in areas, and you saw how they responded today.”

Next up for the No. 19 Tigers, now 15-4 overall and 4-2 in ACC play, are road trips to No. 1 Virginia on Friday and Virginia Tech on Sunday before returning home to face Georgia Tech and Wake Forest the following weekend to close their regular season.

“I’m fired up,” McCuen said of facing the top-ranked Cavaliers.

And with the way his team performed Sunday afternoon, he has good reason to be.