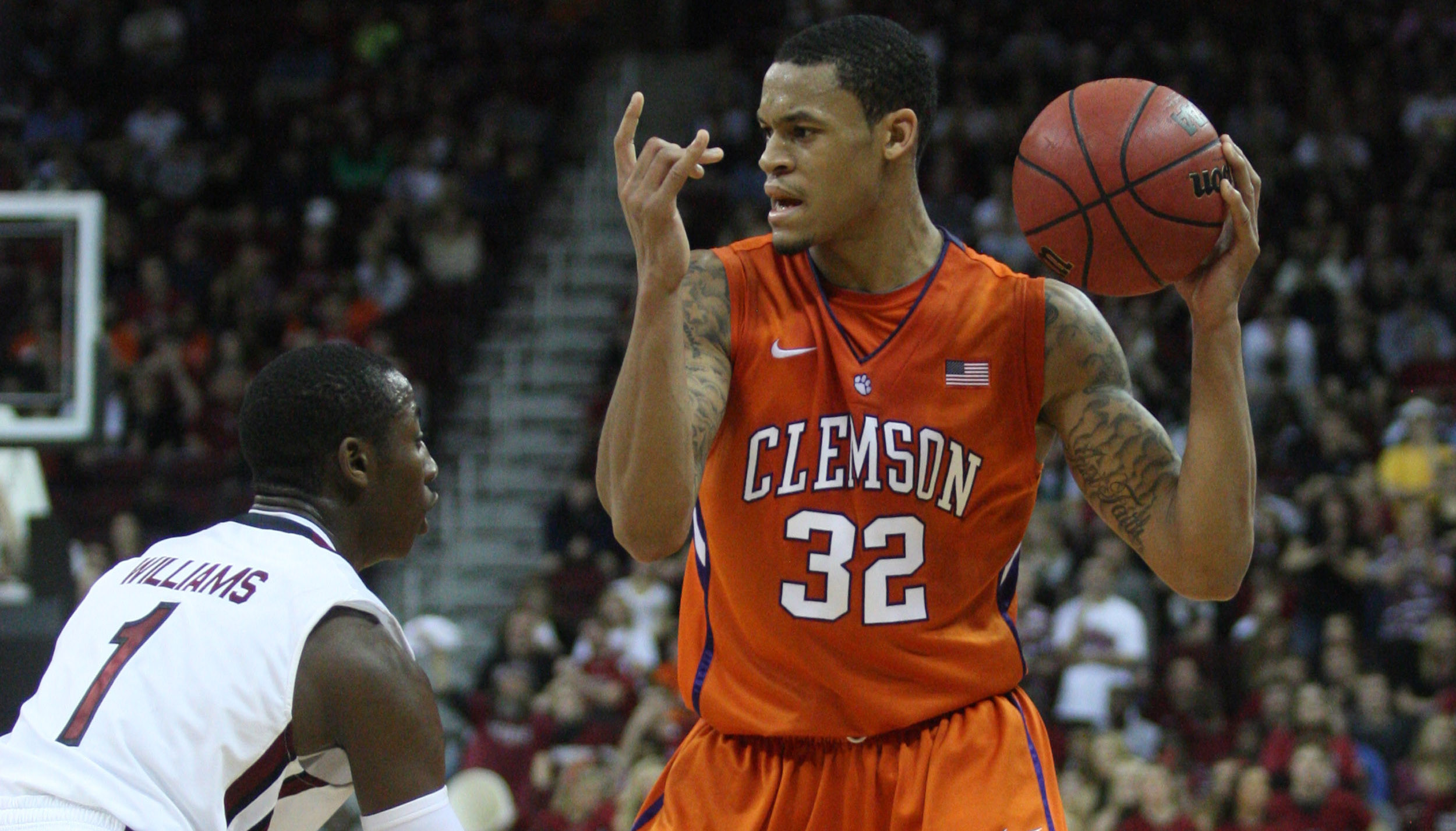 CLEMSON, SC — Brad Brownell says he and Sean Miller are good friends, but he doesn’t imagine Miller is very excited about coming to visit him this weekend. After all, it’s 1,857 miles from Arizona’s McKale Center to Littlejohn Coliseum, where Brownell’s Clemson team will host Miller’s Wildcats at 8:00 PM Saturday. And Brownell should know — the Tigers made the opposite trip last season. “It’s a long way to go for one game,” he said Thursday. It’s actually the longest in Clemson history. Texas Tech, which traveled 1,250 miles, previously had the distinction of making the longest journey to play at Clemson. The No. 8 Wildcats (6-0) will also be the first ranked non-conference foe to play at Clemson since 2000, when Seton Hall did it, and just the fifth in school history. “It’s an opportunity to see where we’re at as a team,” Tigers freshman guard Adonis Filer said. “I know we’re going to face some adversity going against a big team like this, so this game is a great way to see how we handle some adversity.” The Tigers (5-2) have already faced their share of it recently. Sophomore guard T.J. Sapp, who had started all seven games this season, announced this week he is transferring out of the program. “That situation was shocking to me, but we just have to move on,” his classmate K.J. McDaniels said. “It’s a part of this business. For him to make that decision, he’s his own man. So that can’t affect us, we have to keep moving on.” Brownell said another sophomore, Damarcus Harrison, himself a transfer into the program from BYU, was likely to start in Sapp’s place. The 6-foot-4 Harrison made perhaps the biggest shot of the Tigers’ season thus far, knocking down a three-pointer against rival South Carolina on Sunday after the Gamecocks had cut Clemson’s lead to four with a 10-2 run late in the second half. His three-point shot turned out to be the impetus for the Tigers to pull away, as they went on a 9-1 run from there and won 64-55 in Columbia. Arizona won last year’s meeting at the McKale Center, 63-47, behind 14 points from Nick Johnson, as Clemson shot 22.9 percent in the first half and trailed by 13 points. “I remember from last year how they play,” said point guard Rod Hall, who scored a season-high 15 points against USC. “They play very fast and get the ball out and get going — not just their point guard, but they outlet the ball to different players. So we’re going to have to pick up defensively before they get the ball across half court.” Clemson has hung its collective hat on the defensive end all season. It ranks 12th nationally in scoring defense, holding opponents to 53.7 points per game, and six of its seven opponents have scored 57 points or fewer. Arizona, meanwhile, has scored 80 points or more four times this season and topped the 90-point mark twice. The Wildcats are 4-0 when reaching 80 points this season, and going back to the 1997-98 season, are 210-20 (.913) when scoring at least 80. Brownell agreed it wouldn’t behoove his team to get into a shootout Saturday. “We’re not going to try to score 85 and play in the 80s, but I don’t know that we’re just going to walk the ball up the court every possession, either,” Brownell said. “I think we’ve got to be opportunistic, and when we have chances to score, we’ve got to go take them.” Arizona has a trio of double-digit scorers in guards Mark Lyons (12.3 points per game), Johnson (13.7) and small forward Solomon Hill (13.2), clearly a tall order for a Clemson backcourt that just lost one of its few veteran players with Sapp’s departure. “It’s going to be tough to make up for his role because he was very enthusiastic and got people going when they were down,” Hall said. “So, it’s going to be tough to fill the void he’s leaving.  But the freshmen (Filer and Jordan Roper) are progressing well because they’re stepping up and getting better on defense, so Coach is trusting them more.” While the Tigers lose a starter in Sapp, senior power forward Milton Jennings is set to return to the lineup after a two-game suspension. Tickets for Saturday’s game are still available by calling 1-800-CLEMSON or clicking here, and the Tigers are hoping to play in front of a packed house Saturday night in a rare visit from a top-10 team outside of league play. “I’m expecting a big crowd from our fans,” Filer said. “I know a lot of people on campus have been asking about the game and talking about the game, and I’m expecting a fight from us.”