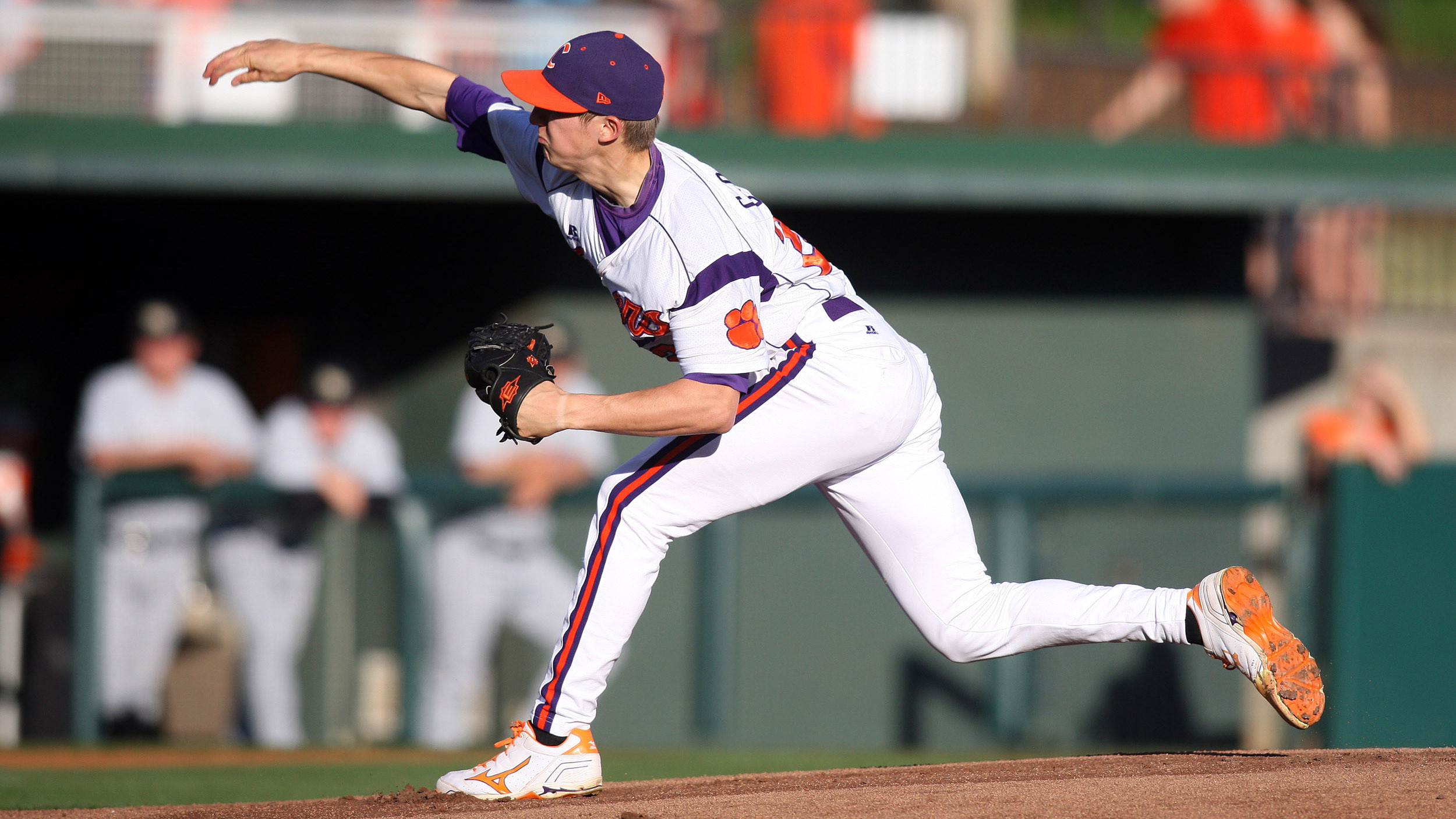 CLEMSON, SC – Daniel Gossett had heard the buzz that Clemson could be headed back to Columbia for an NCAA Regional for a second straight year, but was still surprised when he saw the Tigers’ name pop up there on the NCAA Selection Show.

“I was thinking they wouldn’t do it two years in a row,” Clemson’s ace said Monday after learning the news, “but we’re ready for the challenge.”

While the sophomore righty may have been taken by surprise by the NCAA selection committee’s decision, that was not the case at all for his head coach.

“I’m never surprised anymore about anything,” Jack Leggett said. “We just expect whatever comes our way. Obviously we’d love to be playing at home, but we didn’t make it work. And so, wherever they decide to send us, we’ll be ready.”

And in this case the committee decided to send Clemson back to Columbia, where it will face Big South champ Liberty (34-27), which captured the league’s automatic bid to the NCAA tournament by winning its first conference title since 2000, in the opening game of the regional at 1 p.m. Friday.

Entering the Big South tournament as the No. 5 seed, Liberty lost its first game in the tourney to Radford before winning five straight games, including two in a row over No. 2 seed Coastal Carolina and finally the title game over No. 1 seed Campbell.

“That’s our first concern,” Leggett said of Liberty. “They’ve been down (to Columbia) for a three-game series earlier in the year and took one of the games from South Carolina, so I’ve heard good things about their team. They’ve got some athletic kids, and I’m sure that will be a good challenge for us. We’ll have to be on our ‘A’ game to make that work.”

But while Leggett and his squad must avoid looking beyond the Flames, pretty much everyone else is already focused on the clash that would ensue Saturday should both the Tigers and their archrival, host South Carolina – which will open with the No. 4 seed in the regional, Saint Louis (41-19), at 7 p.m. Friday – either both win or both lose their opening-day games.

“There’s no doubt about it, every time we play South Carolina in Clemson or in Columbia, there’s a chip on our shoulder,” Gossett said. “The atmosphere is going to be fantastic, the fans are going to be in it and it’s going to be a good baseball game. I think the fact that we didn’t get selected as a regional site just adds to that.”

Clemson (39-20) comes into the regional on a five-game skid after having won 24 of its previous 27 games. As Gossett alluded to, the Tigers had three chances to win their 40th game – generally considered the magic number for being selected to host – at the ACC Baseball Championship last week, but were unable to get it done.

The Tigers were outscored 25-10 and batted .207, while the pitching staff had a 6.39 ERA, across the three games at Durham Bulls Athletic Park. Leggett, however, said he doesn’t feel his team is slumping going into the Columbia Regional.

“We actually played pretty decent baseball; we just played some really good teams that were playing well too,” he said.

One positive for Clemson is that freshman left-hander Matthew Crownover, who is 7-2 with a team-best 2.05 ERA, threw a bullpen session Monday afternoon for the first time since leaving a May 17 game at Florida State with soreness in his forearm.

Crownover did not pitch during the ACC tournament, but he said that was more a “precautionary” move than anything and has only had “a little tightness here or there” since the injury.

The Tigers dropped two of three games to South Carolina (39-18) during a series the first week of March, twice being shut out on the two schools’ home fields, but winning the middle game at Fluor Field in Greenville.

It will be the third time in four years that the Tigers and Gamecocks have met in the NCAA tournament. But none of that past history matters as far as the outcome of the regional, according to sophomore catcher Garrett Boulware.

A native of Anderson, SC, who grew up a Clemson fan, Boulware is well aware what is at stake when the Tigers and Gamecocks square off, and said motivation certainly won’t be an issue when the team takes the field at Carolina Stadium.

“Even when we play Liberty, I assume it’s going to be sold out with all the South Carolina fans yelling at us,” Boulware said. “And that’s what we expect when we go down there. It’s a fun atmosphere. We know how to handle it, so we’ll be ready.”