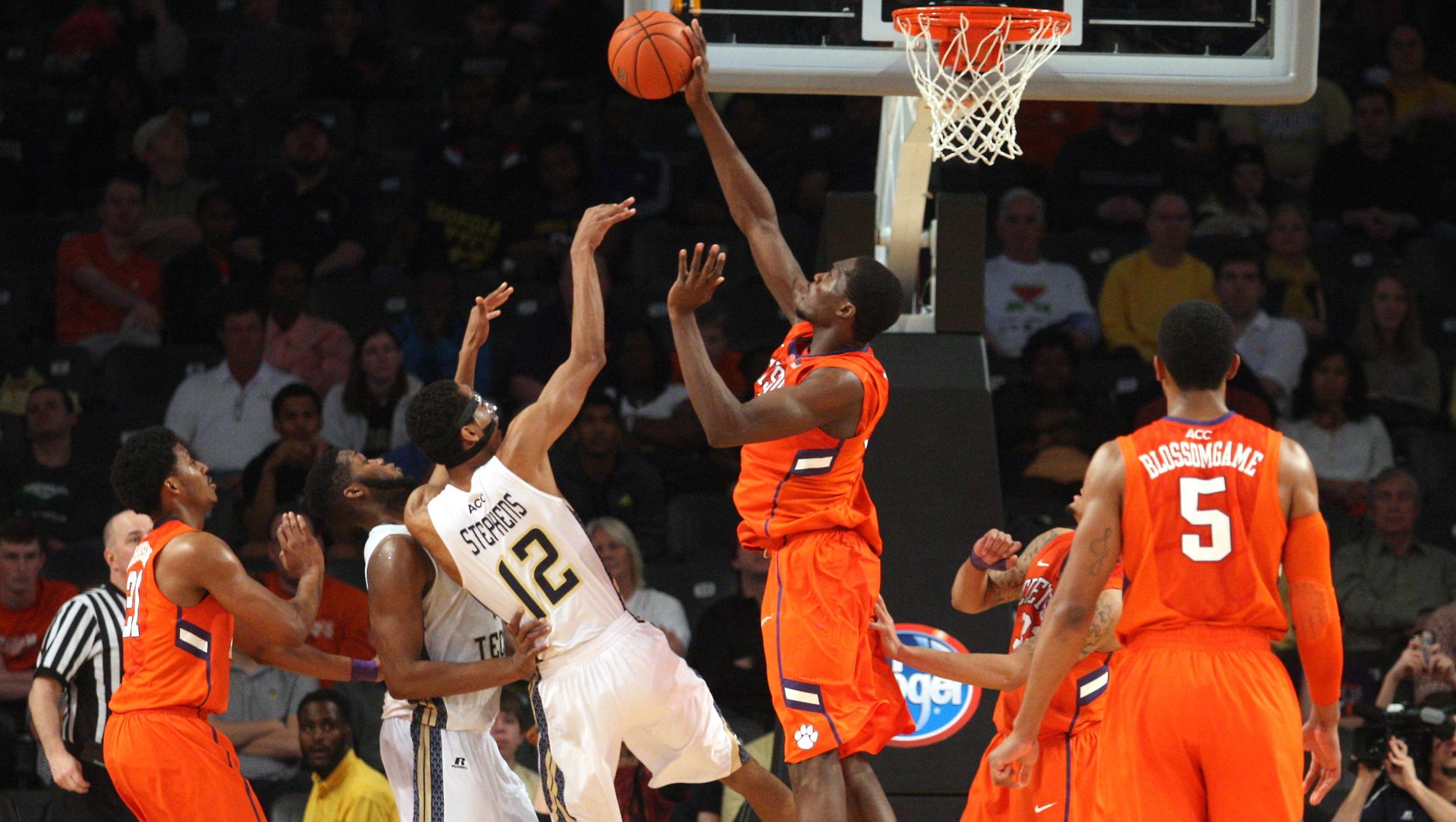 ATLANTA, GA – Brad Brownell has frequently said his team’s recipe for success is salty defense, K.J. McDaniels being K.J. McDaniels, and getting scoring contributions from various and sundry sources to grind out wins.

After Saturday’s 63-55 victory over Georgia Tech, seems like Clemson is getting that formula down pat.

“We’re maximizing our ability,” Brownell said. “We’re playing at maximum level for us most nights, and that’s what you want as a coach.”

Defensively, Clemson (17-9, 8-6 ACC) locked down and held the Yellow Jackets to 38 percent shooting after the half to key a second-half surge, rallying from a nine-point deficit for a critical win at McCamish Pavilion.

McDaniels finished with a game-high 16 points, while Landry Nnoko helped tote the offensive load in the first half and Damarcus Harrison followed suit in the second.

Nnoko matched his season high (13) with the team’s last basket of the day after he’d also turned in a strong effort with nine points Tuesday against N.C. State.

“(Nnoko) was active at the rim, he always does a solid job defensively, and his length is a factor,” Brownell said. “When we get him the ball in a good enough position, he’s an improving offensive player.”

Another improving offensive player is Harrison, who delivered a second consecutive impressive outing (15 points) after scoring 14 in the win over the Wolfpack. He is now 9-for-16 from three-point range over the last five games after Saturday’s 3-for-4 effort.

“We have a lot of confidence in Damarcus, and we have been waiting for him to play like this most of the year,” Brownell said. “He’s played better of late. It’s good to see his threes go in. He’s worked hard on it. When he has good life and good energy, Damarcus is a different player.”

Of Harrison’s 27 points in the two games, 21 of them have come in the second half to help the Tigers to two wins that have put them squarely back in the mix for an NCAA Tournament bid.

Harrison said he, along with a lot of other players on the team, are finally starting to settle into the roles.

“I think we’re all starting to play together because we want to have something very important happen this season,” Harrison said. “K.J.’s been playing well all season, and I think the guys are starting to come around and help him out.”

Even reserve big men Josh Smith and Sidy Djitte had key baskets during a 17-6 run that helped the Tigers go from their largest deficit of the game to take the lead for the first time in the second half.

“That’s just confidence,” Nnoko said. “Josh, Sidy and I, all the bigs, we go after each other in practice every day. Every time we’re on the court, we feel like we can make those moves, so whenever you get an opportunity, you’ve got to take it.”

The Tigers dug themselves a hole by struggling with two things they’ve made a habit of doing well: taking care of the ball and defending the three-pointer.

Clemson came into the game averaging just 11.1 turnovers per game, but had eight of them in the first half alone, several of which either wiped out baskets or spoiled promising possessions.

“When you’re playing a low-possession game and you have eight turnovers, that’s a problem,” Brownell said.

On the other end, the Tigers entered the contest on pace to set a school record for three-point percentage defense (.275), but Georgia Tech bucked that trend early with a 3-for-4 start from long range to lead by as many as seven before halftime.

Much of the blame for the halftime deficit could be directed toward sloppiness on the offensive end.

“We didn’t quite have the energy we needed to begin the game,” Brownell said. “Credit Georgia Tech, I thought they were really ready and controlled the first half.”

Clemson began the second half with another turnover on a poor entry pass, and the Jackets scored the first five points out of the break to make it 34-25, their largest lead of the game.

Clemson missed a chance for the lead when Nnoko missed a pair from the line, but Smith snatched the rebound away and laid it in to make it 42-40, its first lead since 10-8.

Smith ripped down another offensive board on the next possession and scored again to push the Tigers into the lead at 44-42.

Trae Golden’s long three-pointer as the shot clock wound down restored the Jackets’ lead at 46-44, but a big three-pointer from Harrison put Clemson back on top, 48-46, as the clock ticked inside six minutes.

Clemson led 53-48 when Harrison came up with a steal in the open court and made a contested layup, and Hall fed Nnoko underneath for a dunk with the shot clock running down that put an exclamation point on the win with 1:15 left.

Three Tigers finished in double figures, while eight scored in the game.

“To have everybody else step up, that takes a load off of me and it gives them more confidence,” McDaniels said. “That’s what we need – my teammates to have more confidence, go out there and play their games and make baskets.”

Clemson will play its final regular season road game Tuesday at Wake Forest, before closing the campaign with home games against Maryland, Miami and Pittsburgh.

Brownell has been reluctant to talk about his team’s postseason hopes, preferring to focus on a game-by-game approach, but admitted the two-win week had buoyed the Tigers’ chances.

“It’s a big win for us that way,” he said. “We know to make the NCAA Tournament, we’re going to have to play awfully well down the stretch. I’m proud of the way our team has responded.”