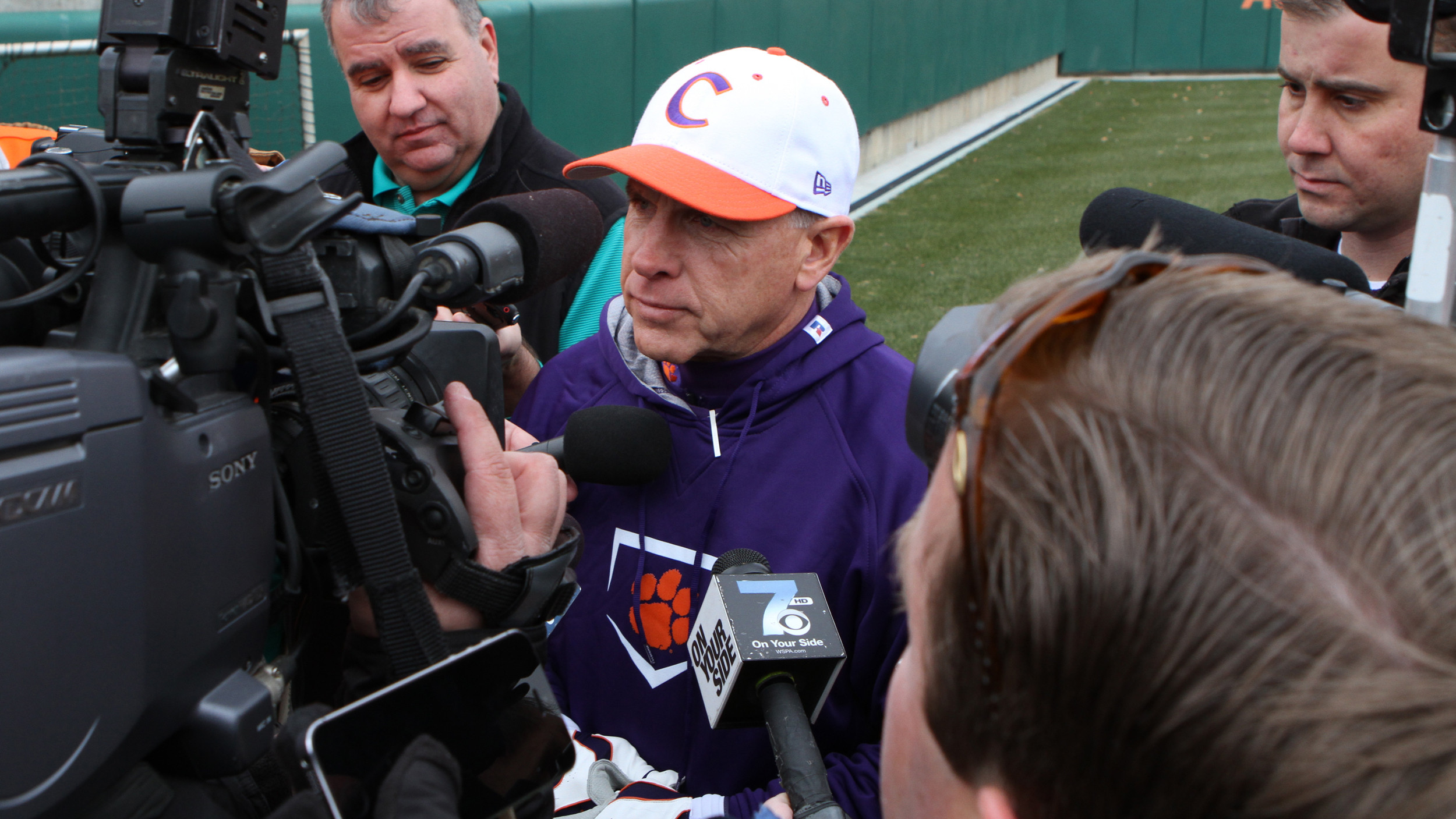 There’s never any doubt within the Clemson baseball team what the intended destination is each season.  The Tigers have it stitched on the back of their caps and they break the huddle at the end of every practice by saying it.

As the team opened preseason practice Saturday on a blustery, frigid afternoon at Doug Kingsmore Stadium, junior ace Daniel Gossett admitted the team is keenly aware that it’s been awhile since it reached its goal.

“We haven’t been to Omaha in three years and this is the fourth year, and every four years at least under Coach (Jack) Leggett, we have been to Omaha,” said Gossett.  “So that’s a little more incentive.  We can’t be that one team not to go to Omaha.  It’s been long enough.  I’ve never been.  I don’t think anyone on the team has been – we don’t have any redshirt seniors – so it’s time.  It’s time to go.  It’s time to win.”

Clemson won 40 games and made the NCAA Tournament in 2013, but slumped down the stretch and likely missed its chance at hosting a regional when it let a five-run, ninth-inning lead slip away in the ACC Tournament against top-ranked North Carolina.

Forced to go on the road to the hostile environment of the Columbia (SC) Regional for a second-straight season, the Tigers fell twice to Liberty and bowed out without facing host South Carolina.

“That was one of the more humbling experiences I’ve ever been through,” Gossett said.  “We were climbing steadily, looking good and approaching that magic number to host – and to be brought down so fast, it’s a brand-new experience.  We’ve talked amongst the players about how that was one of the worst feelings.

“Losing out in the ACC Tournament and only winning one game in the regional, we know that we don’t ever want to feel that again.  I’m done with that as a player.  We’re done with that as a team.  We’re ready to take it to the next level and win the last game that we play.”

The Tigers have ample reason to be optimistic, as they return eight of nine position starters and 77 percent of their innings pitched from last season’s squad, which was one of the youngest Clemson teams in recent memory.

“Everybody is a year better and a year more experienced, and everybody is ready to get to work starting today and prove that we can be an offensive team with a great pitching staff,” sophomore shortstop Tyler Krieger said.  “Hopefully, that meshes into something of a national-championship-caliber-type team.”

But just because the Tigers return their starting lineup nearly intact – only centerfielder Thomas Brittle is gone from last year’s regulars – Leggett made sure to point out that didn’t necessarily guarantee everyone of them would keep their jobs.

“The key is this – we have some guys coming back, but they all have to be better,” Leggett said.  “If they come back and they’re the same, then we haven’t really gone where we need to go.  That’s why you always bring in good players.  You try to push them to another level and provide intra-team competition, and if one of them emerges ahead of somebody who’s been here for awhile, so be it.”

One of the primary reasons the Tigers – who were picked to finish third in the ACC Atlantic Division by the coaches – are optimistic is the return of Gossett at the top of the rotation.  The righty had a 10-4 record and 2.56 ERA in 2013.

The Tigers have a number of options in the rotation beyond their staff ace, including Matthew Crownover, Zack Erwin, Jake Long, and Clate Schmidt.

Sophomore lefthander Crownover posted a 7-3 record and team-best 2.19 ERA last season despite being limited in innings as he recovered from elbow surgery.

“Crownover was nine months removed from ‘Tommy John’ (surgery) and was throwing 81, and he still had (seven) wins last year,” junior catcher Garrett Boulware said.  “This year, he’ll have most of his stuff back, and he’ll have one year of experience under his belt and his arm back.  He could really do something crazy this year.  He’s a really talented pitcher, and he’s a really smart pitcher.”

Another sophomore southpaw, Erwin, came on strong toward the end of last season and finished with a 5-2 record and 3.45 ERA.

“He’s bigger and he’s gained weight,” Boulware said.  “He’s a skinny kid, but he’s put some weight on, and the ball comes out of his hand effortlessly, and it jumps.  He’s got really good stuff, and I think both (Crownover and Erwin) could be a huge part of our pitching staff.”

While the Tigers return eight regular starters among their position players, one of their top hitters, senior slugger Shane Kennedy, is not expected to return from a knee injury he suffered in the fall until “mid to late-April,” according to Leggett.

“He’s making good progress,” Leggett said.  “He feels good about it and he’s a strong kid as it is, so hopefully he’ll come back quick.”

“I think offensively we have a better chance to be a better team than we were last year,” Leggett said.  “We’ve got more depth, we’ve got more guys who can run, and we’ve got more interchangeable parts and more intra-team competition.  We know how we have to play to win, so I like the fact that we’ve got a little more to choose from.”

The Tigers also have plenty of motivation, as no one has forgotten the way that last season ended.  Almost to a man, they made it clear they were chomping at the bit to hit the practice field Saturday despite the bitter cold.

“It’s always a motivating factor, whether you lose in the regional, super regional, or in Omaha, it always stinks getting on the bus and starting over again,” Leggett said.  “It’s always a motivating factor, but at the same time – every year is new, and we’ve got a bunch of good players out here who are motivated to get to Omaha and play for a National Championship.”