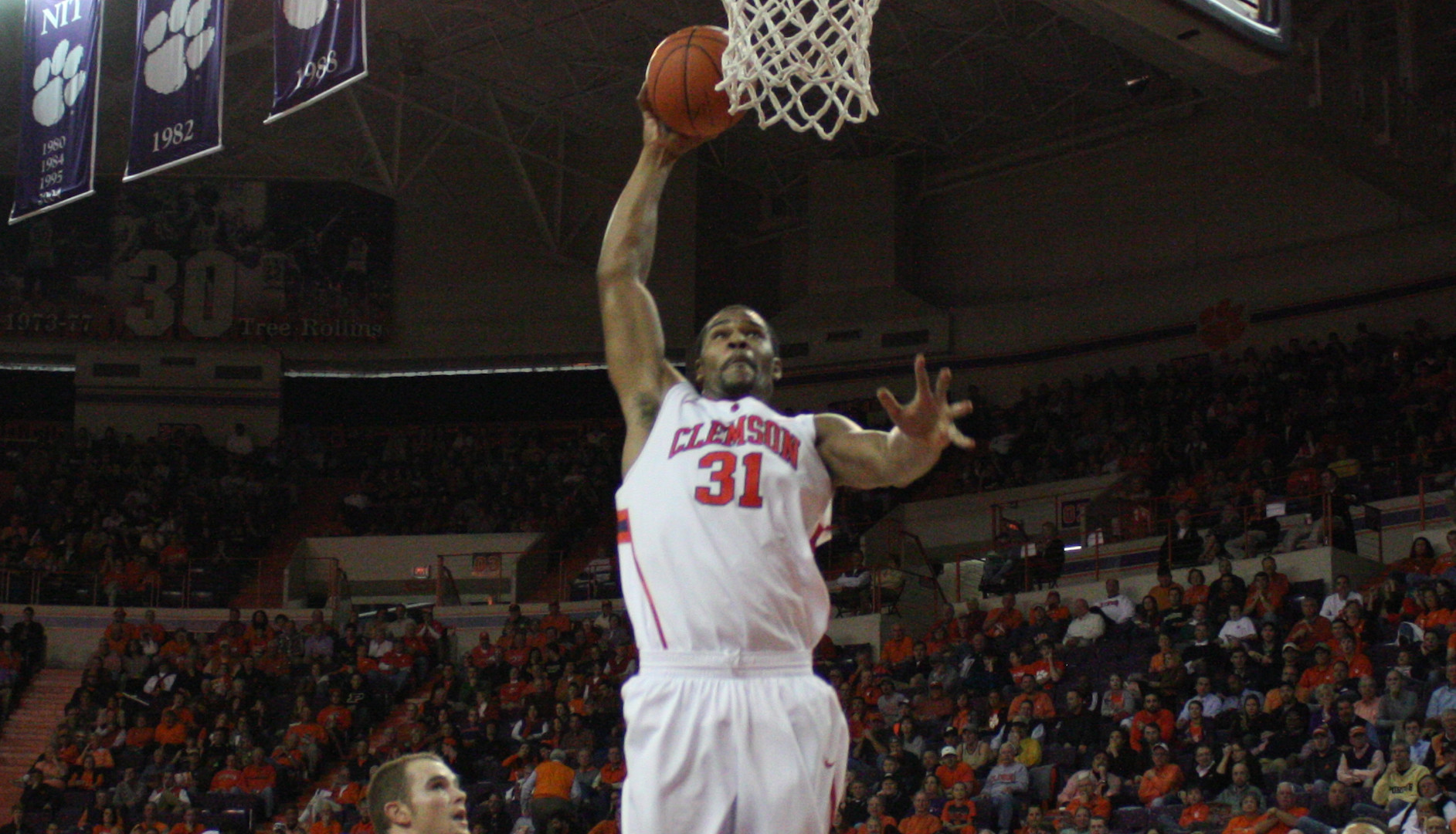 CLEMSON — Devin Booker says the Clemson basketball team hopes to earn its fan base a bit of rivalry redemption Sunday when the Tigers travel to South Carolina. “That’s the plan,” the senior big man said Friday afternoon. “I know the fans aren’t too happy with what’s been going on the past few years, especially in football, so hopefully we can take control of this game early and be in position to win.” The Tigers are also looking to exact a bit of revenge on their own behalf, as the Gamecocks have won two straight in the series on the hardwood, including a 58-55 victory last year at Littlejohn Coliseum, after Clemson had won six straight prior. “It means a lot,” Booker said. “They beat us last year, so it left a little nasty taste in our mouths and we’re pretty much seeking revenge at this point.” Booker is one of four Tigers who hail from the Palmetto State, and Sunday’s game will be a homecoming of sorts for freshman guard Jordan Roper, a native of Columbia who was a two-time all-state selection at Irmo High School. “It’s a pretty big game for me,” he said. “Living in Columbia for so long, I’ve known about the rivalry and how big it is for the fans. So, it’ll be exciting.” Clemson (4-2) is coming off a 73-61 defeat to Purdue on Wednesday in the ACC/Big Ten Challenge. The Tigers trailed by 20 points at halftime, their largest deficit at the break in any game under Head Coach Brad Brownell, before rallying to close the gap to single digits inside the final two minutes. The Gamecocks enter the contest 5-2 in their first season under Frank Martin, most recently losing to St. John’s 89-65 in the SEC/Big East Challenge in New York. Senior guard LaShay Page, a transfer from Southern Miss, leads South Carolina at 13.6 points per game, while forwards Michael Carrera (12.0) and Lakeem Jackson (10.4) also average in double figures. “South Carolina is a team that plays really hard and obviously takes on the persona of their coach,” Brownell said. “Frank’s done a phenomenal job at Kansas State and is doing some good things already at South Carolina. They’re a little bit of a younger team, kind of like we are, but have some guys that can really shoot the ball from the perimeter.” Brownell admits he’s been pleasantly surprised with how well his own young squad, which features 12 underclassmen on its 14-man roster, has taken care of the ball in the early season. Clemson leads the ACC in turnover margin (+3.8) and assist-to-turnover ratio (1.3) and has committed the fewest turnovers per game at just 8.7. The Gamecocks, meanwhile, have not taken care of the ball nearly as well, having committed a whopping 135 turnovers — Clemson has just 52 — on the season. “I think that will be a factor in this game,” Brownell said about the turnover battle. “They probably rebound better than we do and are more aggressive going to the offensive boards, so that’s where their extra possessions will come. And then maybe we’ve been a little better taking care of the ball, and so that’s where sometimes we can have an advantage of getting extra possessions.” Brownell joked that taking care of the ball did the Tigers little good Wednesday, as it just led to a lot of missed shots. Clemson struggled mightily shooting, hitting 4-of-23 three-pointers and shooting 39.7 percent overall and 55 percent from the foul line. Booker, who led the way with 18 points and eight rebounds in 36 minutes of action, said the Tigers weren’t as concerned by their poor shooting so much as they were about their poor effort on the other end of the floor, where they allowed Purdue to shoot 57 percent in the first half. “We know our offense will come along eventually, but if we get multiple stops then that can be the key to our game,” Booker said. Like the Tigers, South Carolina also hangs its hat on the defensive end, and Brownell knows his young guards — notably point man Rod Hall, who leads the ACC in assist-to-turnover ratio (4.6) — are in for a big challenge at Colonial Life Arena. “They play a unique style that is very hard to play against because of how hard they guard and the way they take away passes,” he said. “They are very much a pressure defensive team, and we expect a very hard-fought, competitive, physical game against them Sunday.”