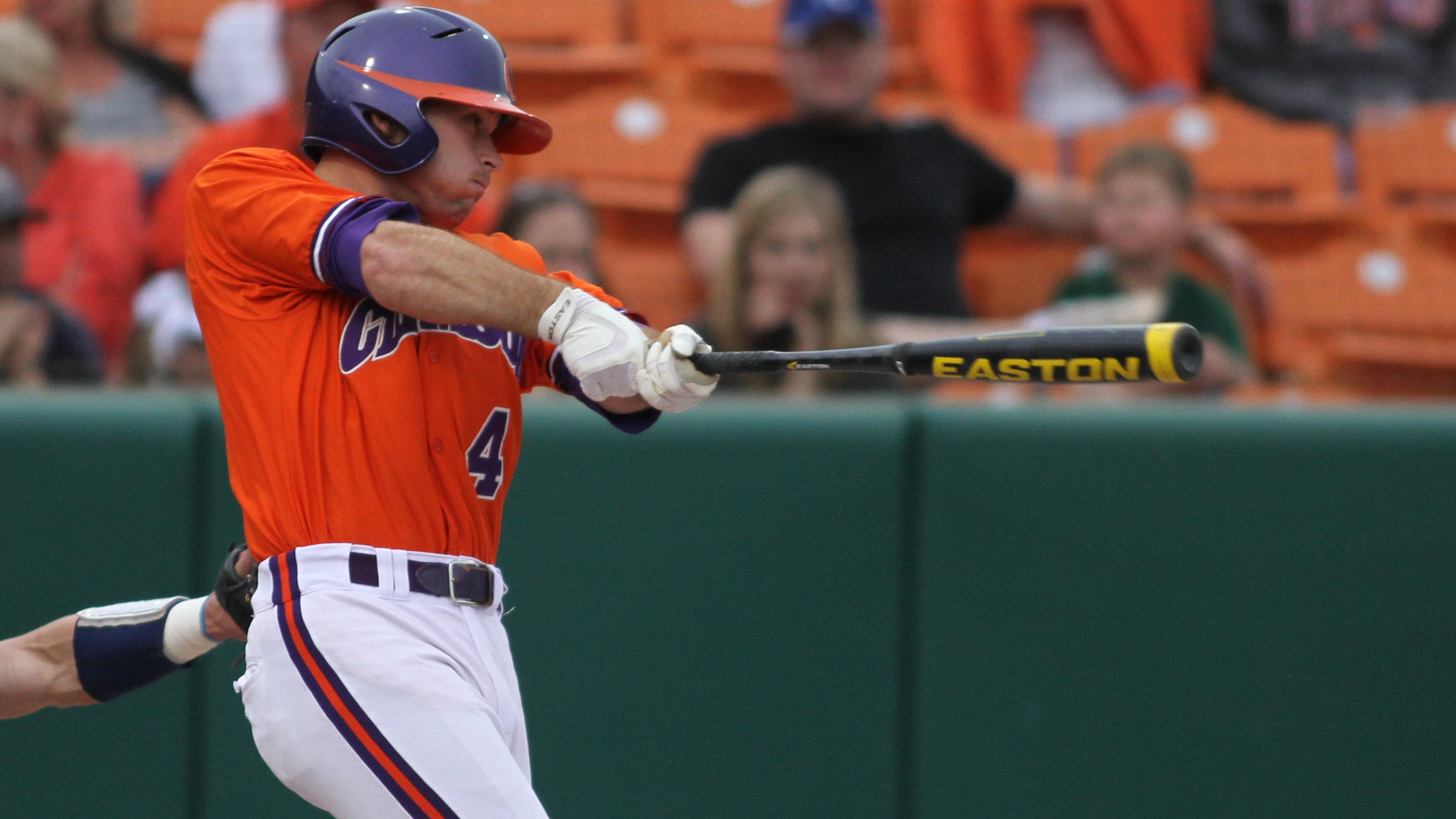 EXCLUSIVE: Tigers Burning Up Base Paths during Second-Half Surge

DURHAM, NC – After Clemson dropped its series to rival South Carolina in March by being shut out in two of the three games, the Tigers’ coaching staff went back to the proverbial drawing board in hopes of tweaking their offensive game plan.

“We knew we had some really good athletes,” assistant head coach Bradley LeCroy said, “and we wanted to use it – use our speed, use our athleticism.”

The Tigers had only eight career home runs on the roster entering the 2013 season, and while some pop eventually emerged from players such as Shane Kennedy and Garrett Boulware, head coach Jack Leggett believed his team needed to play to the strengths LeCroy mentioned in order to put more pressure on its opponents.

“We do run pretty well as a team,” Leggett said Wednesday after his squad practiced at Durham Bulls Athletic Park, “and it just became a conscious effort from that point on to be a little bit more daring and play with a little more reckless abandon.”

It wasn’t an instant transition for Clemson to adapt its new style of play – as it still stood just 16-11 through its first 27 games – but once it figured out the formula, it has been a formula for success.

The Tigers enter this week’s Atlantic Coast Conference tournament having won 23 of their last 29 games, and a big reason for that success has been speed on the base paths.

Clemson leads the ACC in stolen bases with 102 in 56 games, good for 1.8 per game, but the Tigers have nearly doubled their stolen base totals during the second half of the season.

“(Coach) has pinpointed it all season, and I think we’ve just kind of gotten loose and in the habit of doing it,” junior utility player Shane Kennedy said of the team’s hefty stolen base totals. “It’s kind of come naturally. At first it was something that we had to force, but now it’s just instinct – you just go.”

“This is one of the fastest teams I’ve ever played on,” said Brittle, the Tigers’ senior centerfielder. “Everybody has an aggressive mindset on the bases, and it’s not just stolen bases, it’s on base hits going first to third and putting more pressure on the defense.

“I definitely think it helps as far as our attitude going into games, because once guys start running the bases like that, then it kind of carries over to the next guy and helps us get things going.”

Brittle said a primary key to the Tigers’ success on the base paths has been Leggett’s willingness to put the decision-making in his players’ hands, even if he admitted his head coach still puts up the stop sign a little too often for his taste.

“He gives us the green light pretty often, though,” Brittle said. “He likes us playing aggressive. He’s an aggressive guy, and he knows the guys that have a good feel for it. And the ones that don’t, he kind of just plays it by ear, and if he feels like it’s a good situation for them to do it, then he can put a steal on. I feel like he’s got a pretty good sense of letting guys go with it and getting what they can.”

The Tigers are the only team in the conference to have reached triple digits in stolen bases and have also attempted more steals (139) than any other league team. That aggressiveness has been a key to Clemson finishing fifth overall in the ACC standings despite hitting the fourth-fewest home runs (18).

“One through nine (in our lineup) can run, and it has worked for us, as far as stealing bases or taking the extra base or even just getting down the first-base line,” Kennedy said. “It’s really worked for us.”

Clemson, the No. 5 seed in the ACC tournament, opens its tourney slate against No. 4 seed N.C. State at 7 p.m. Wednesday and then gets a day off before facing No. 1 seed North Carolina at 7 p.m. Friday and No. 8 seed Miami at 3 p.m. Saturday.

For his part, Leggett likes what he sees out of his team entering this week’s games.

“When we play that aggressive style of baseball, and our kids use their speed like we can and run the bases and use our bunt game and everything, then I really like the way we play,” Leggett said. “Our engine’s been churning pretty good for the last 25 or 30 games, so I want to keep that thing going.”