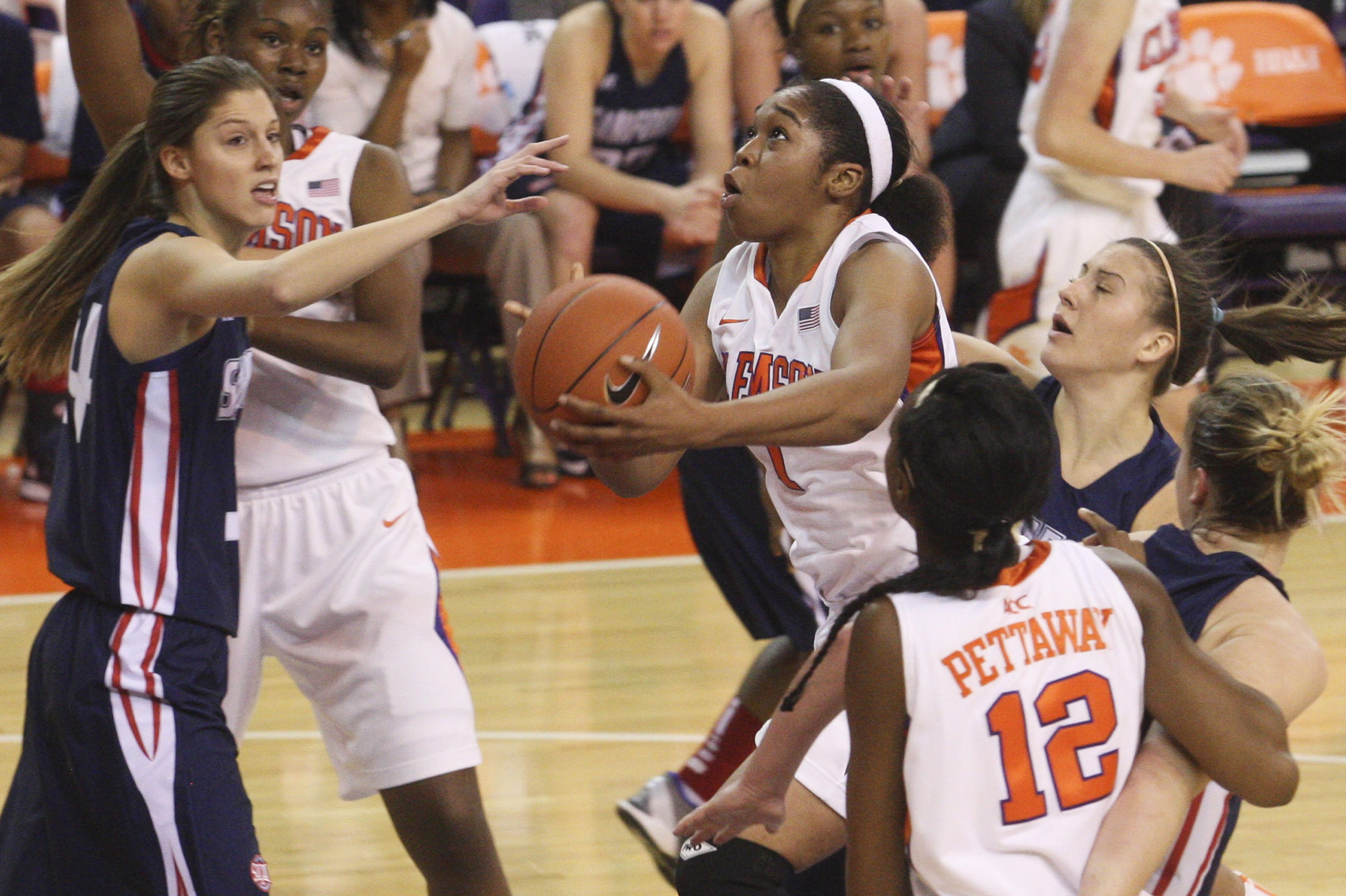 CLEMSON-March 26, 2011. That was the last time Charmaine Tay checked into a collegiate basketball game.

For the past 643 days, Tay has yearned to get back into the rotation for a program at the collegiate level. The highly-touted point guard transferred from Louisville to Clemson prior to the start of the 2012 spring semester, and she waited.

“It was something I’ve just been thinking about and dreaming about since the last time I was on the court,” Tay said. “It was kind of a process for me.”

On Saturday afternoon, the wait was over, as Tay suited up for the Lady Tigers in a 63-51 victory over Samford. The sophomore played 31 minutes in the game, scoring seven points and grabbing seven rebounds. She also had two steals in the contest.

Tay’s presence on the floor was a welcome sight to Clemson Head Coach Itoro Coleman, who has awaited this day as much as Tay has. Ever since the top-30 prospect was first seated on the same bench as her future coach last January, Coleman knew the difference she would make for the program at Clemson.

“It was good to see Charmaine out there,” she said. “Even though she was a little winded and she was still coming into her own, you got spurts of what is to come in the future.”

Tay was able to knock off the rust early in the game and become a solid contributor down the stretch. Coleman routinely called isolation plays for the point guard in the second half, something both coach and player expect to become the norm as Tay becomes a more frequent member of the lineup for the Lady Tigers.

“Charmaine is great off the dribble,” Coleman said. “She’s a good one-on-one player. She can take you off the dribble and she uses ball screens really well. We’ll look to do that with Charmaine and a couple of the other guards.”

“That’s kind of my role,” Tay said. “They know I can get to the basket, and I will. Toward the end, when the game got close, that was the go-to play.”

Tay steps into eligibility at a critical time. Attrition and injury have combined to reduce Clemson’s available bodies down to a maximum of eight players. With conference play mere days away from starting, Tay will have very little time to acclimate herself to playing with her teammates.

Coleman says she has been impressed with Tay’s approach to practice as she has patiently awaited her chance to contribute. It is one of the main reasons why the team trusts the former Cardinal, even though Saturday was the first time Tay and her teammates have worked together in unison in a regular season game.

“What Charmaine brings to the team is just her knack for basketball,” Coleman said. “She absolutely loves playing. She has great vision on the court, and defense is something that she prides herself in. We’re excited to have her here. We’re excited to get her to gel with everybody on the team.”

The rest of the Lady Tigers are excited, too. Tay is also ecstatic to be a part of a team, something she waited 30 months and 26 days to experience once again.