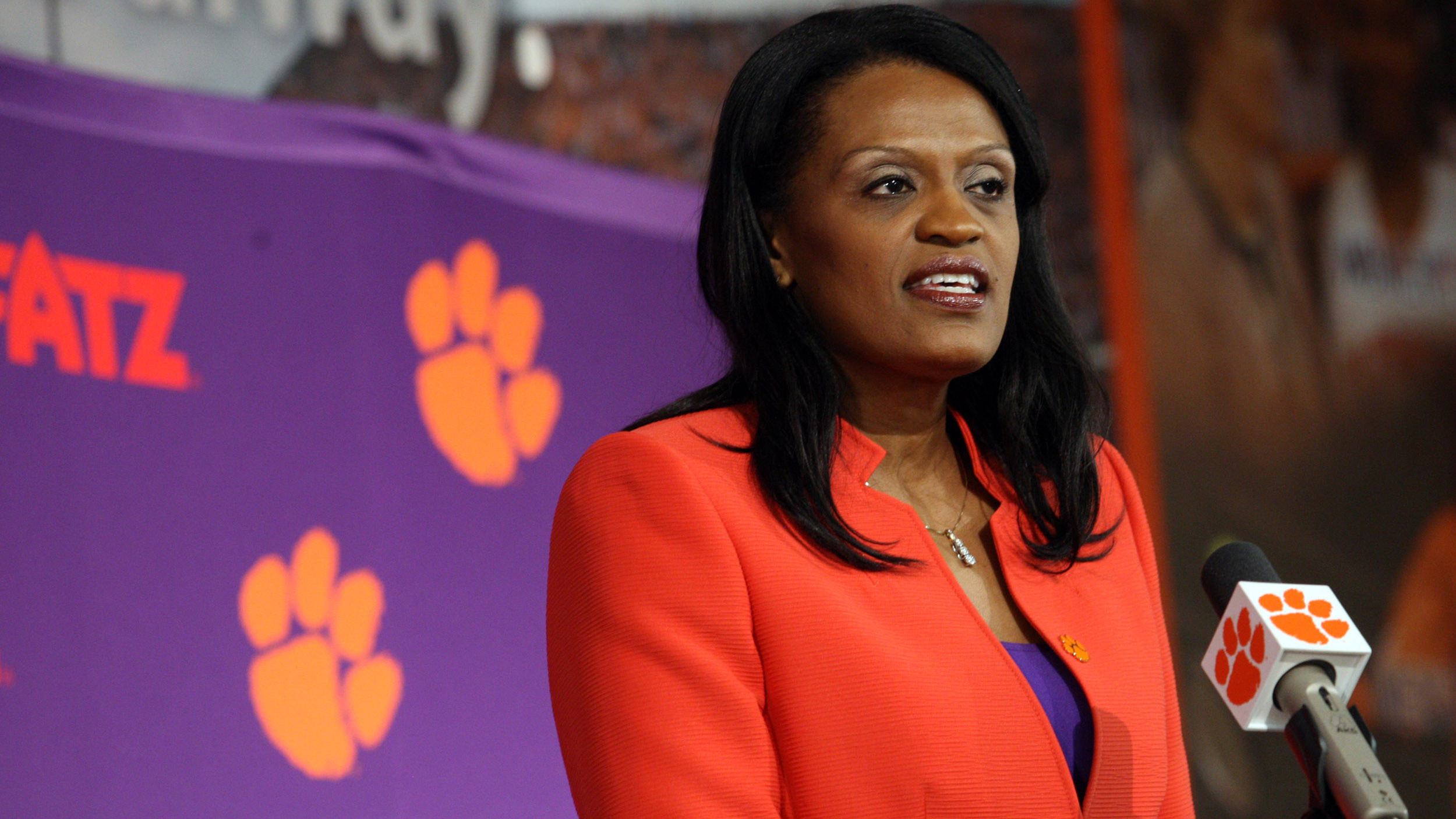 Newly-minted Head Women’s Basketball Coach Audra Smith is tall in stature, but it may be her energy that will loom over the program. Smith is well-known around the women’s game as one of the most intense leaders in all of college basketball.

Smith is bringing her trademark style to Clemson this fall, as she was tabbed as the leader of the Lady Tiger program on April 8 by Director of Athletics, Dan Radakovich. She spent the previous nine seasons at UAB, where she is coming off four straight winning seasons and turned that program around.

She’ll inherit a program that is long on history, but longing to make more. Smith learned the ACC ropes as a student-athlete at Virginia from 1988-92, and was an assistant coach from 1994-2004 under Hall of Fame coach, Debbie Ryan.

“I cannot think of a better person than Audra Smith to take the Clemson Women’s Basketball Program to the next level,” said Ryan. “Audra is a talented and innovative coach in every facet of the game. She is, quite simply, a proven winner.”

During her time with the Cavaliers, she went to the Final Four three times as a player, and went to the NCAA Tournament nine times in ten years as an assistant coach.

Her first stop as a head coach was at UAB, where she inherited a program that had been 29-54 over the three seasons prior to her arrival. She had the team back to .500 within two years, and competing for the conference title perennially since. Her program has achieved a winning record in each of the last four seasons as well.

Achievement and success is difficult to come by in collegiate athletics, and Smith thinks her formula is what this program needs.

“I want my players to leave the basketball court completely exhausted,” said Smith. “Sweating, dragging off the floor once the game is over. That will tell them and me that they have put everything in them on the court. No matter how the game turns out, we know we’ve put our best foot forward, and we’ll know we have done everything possible to win the basketball game.”

Clemson is coming off a difficult 9-21 season in which the Lady Tigers often fought to stay in games, but either couldn’t hold on, or ran out of gas. Smith seems unphased, with a stern belief in her system and program to meet the challenge head-on.

“You need to have the will to win,” she says. “I do not like the word ‘can’t’. You should take it out of your vocabulary completely. There’s no such thing as can’t.”

Originally a Milledgeville, GA native, Smith is in many ways self-made, and has worked tremendously hard for much of her life to attain her goals. She admits that some of those lessons and achievements did not come the easy way.

“I will sometimes refer back to my playing days and the things I should have done differently,” Smith explains. “Had I done those things differently, I really feel like I would have been a better player. I really want to give them that information, that insight, so that they can not make the same mistakes I made. No shortcuts. You can’t be successful by taking shortcuts. You have to do everything the right way, and be committed to it. I’m all about buy-in and accountability. That’s number-one for me.”

Now donning the Clemson Orange and Regalia of the Lady Tigers, Smith is eager to get started and proud to be a member of the family – so much so that she almost let the cat out of the bag prior to her arrival in Tigertown.

Smith recalled a recent encounter prior to the official announcement: “I was in line leaving New Orleans [the site of the Women’s Final Four], and there was a guy in front of me with a Clemson hat, and I wanted to tell him so bad! I had to hold all this back. That guy must have been wondering, ‘Why is this big woman staring at me?!’ He had his hat on, and his wife had her orange, and sure enough, they connected with me in Atlanta, and into Greenville. So, I never said anything, but hopefully I’ll run into them again!”

“I’ve had opposing schools, and even my own school tell me ‘Listen, you can not stomp. You are putting dents in the floor.'”

That may be just the attitude the women’s basketball program needs to kick down the doors to begin a new era.