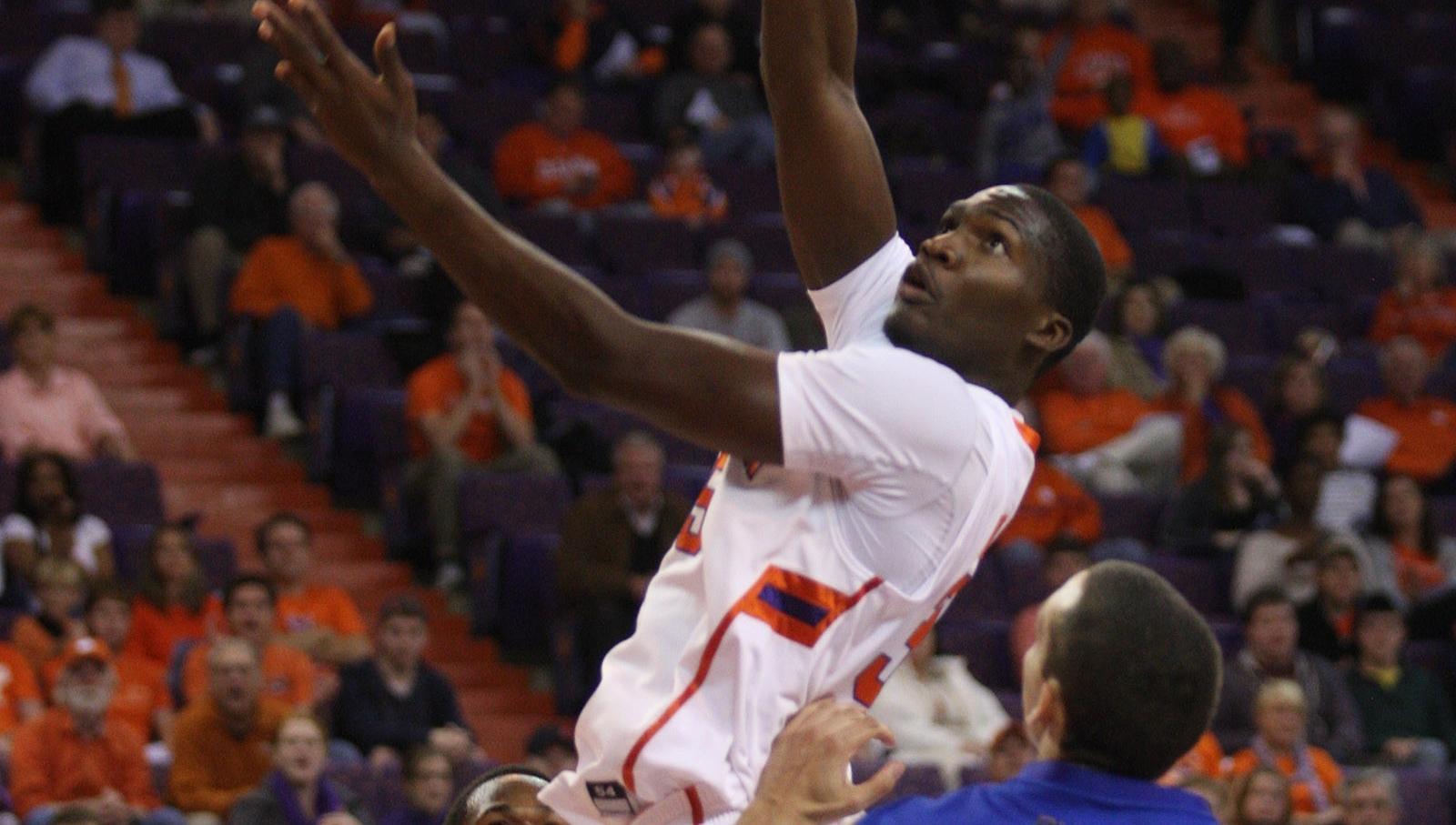 CLEMSON, SC – With six newcomers on its roster, the Clemson men’s basketball team needs those players to contribute at some point this season. Monday’s exhibition against Lander was as good a time as any for them to start.

Big man Landry Nnoko tied a team-high with 14 points and point guard Adonis Filer joined him in double figures with 12, as the freshmen helped the Tigers roll to a 72-42 win in their final tuneup before the season opens Nov. 12 against Presbyterian College.

“It was a good experience for those guys,” Clemson Head Coach Brad Brownell said. “Landry got some angles in the post and finished some plays, which was really good to see. Adonis, it was nice to see him make a three, make a pull-up. He comes in and guards very hard.”

Nnoko scored six points inside the first five minutes to fuel an early run, capping off an 11-0 spurt with a two-handed slam in transition that gave the Tigers some breathing room with an 11-4 lead at the 15:23 mark of the first half.

Afterward, the freshman center from Cameroon admitted the early baskets helped him get comfortable in his first live collegiate action.

“It was nice, it really was,” he said. “It helped a lot because I was a little bit nervous, but when I got those points it helped me get my motor going.”

Nnoko continued to impress in the second half, showing off an assortment of post moves – which he credited Associate Head Coach Mike Winiecki for teaching him – en route to tying senior Milton Jennings for the team lead with 14 points to go along with six rebounds, three blocks and a steal.

“He did a good job,” Brownell said of the 6-foot-10 Nnoko. “He had a size advantage tonight, which he won’t have as much against some other teams. But he just tries really hard.  He’s very active defensively, especially on ball screens.

“He’s not quite as good yet around the basket, protecting the basket, but we’re very pleased with the young guy in his first performance as a Tiger.”

Filer, a freshman from Chicago, made 5-of-7 shots from the floor, including a three-pointer from the top of the key, as well as helping the Tigers pull away in the second half with a pair of steals that led to points in transition.

“Coach (Brownell) emphasizes defense a lot, and I just try to play defense as hard as I can because I know that’s what is going to get me more playing time,” Filer said.

Filer has been locked in a three-way battle for the point guard job with sophomore Rod Hall, who finished with four steals of his own, and fellow frosh Jordan Roper.

Brownell said he was pleased with Filer’s performance on both ends of the court.

“He’s a very aggressive defender,” Brownell said. “He and Rod, obviously, both really apply tremendous ball pressure, and you could see where they started to wear the other team’s point guard down. That’s something we’ll need to do well this year for us to be good. And those two guys especially, are very good at it.”

Brigham Young transfer Damarcus Harrison also got into the act among newcomers, as he finished with a balanced stat line – six points, four rebounds and four assists.

“I think I did pretty well,” the sophomore said. “I think I played a good all-around game – played good defense, good offense and shared the ball well. I hope I can keep that going this whole season.”

A fourth Tiger newcomer, Roper, saw action in the game, finishing with two steals, one assist and one rebound.

“I’m pleased with those guys,” Brownell said of his newcomers. “I think they really did some good things for us in their first college environment, in front of the home fans especially.”