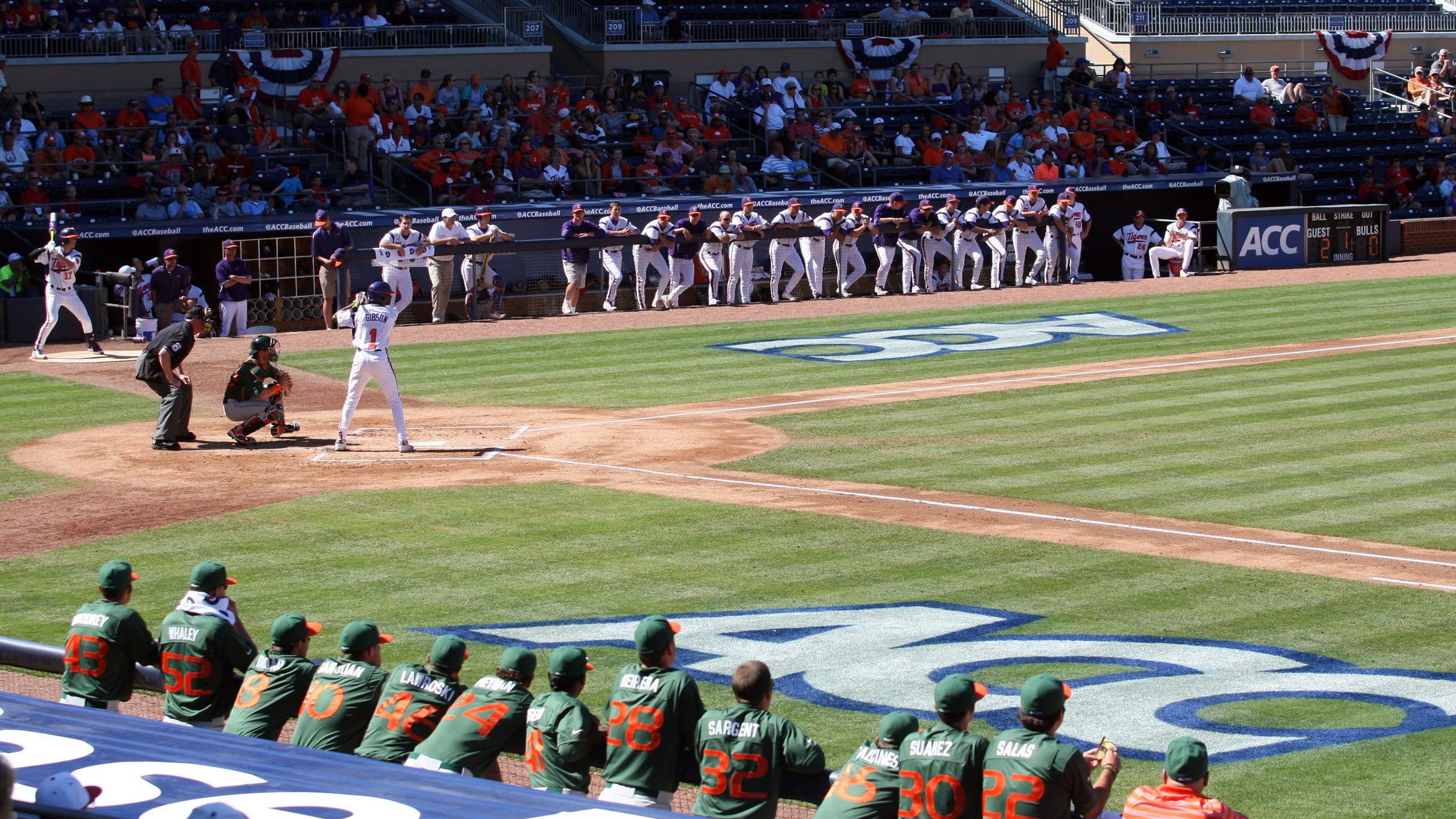 EXCLUSIVE: Leggett: ‘We had a rough weekend, but we’re a good ball club’

DURHAM, NC – Jack Leggett wasn’t exactly overjoyed by what transpired this week at Durham Bulls Athletic Park, but the Clemson head coach knows one team he wouldn’t want to face in next week’s NCAA tournament: his own.

“This is a really good conference, in case anybody hadn’t noticed. … We’re not going to let three ballgames define what we accomplished all season long,” he said. “We’ve still got some games ahead of us, and we’re looking forward to playing those – and we’ll be in a good frame of mind when that comes about.”

It was a week of missed opportunities for the Tigers, all of which added up to three missed chances to reach the magic number of 40 wins prior to the NCAA tourney after having won 23 of 29 games to close the regular season.

Clemson fell to Miami 7-0 on Saturday afternoon to cap a winless week at the ACC Baseball Championship that sent the team back home having failed to improve its resume for hosting a regional when the 64-team field is announced Monday.

“You hear things like that, but I don’t think we got tight or were pressing for a win,” pitcher Jonathan Meyer said of the need to get at least one win in the conference tournament to secure a regional. “I don’t think that was the case at all; it just didn’t work out this week.”

Against the Hurricanes, Clemson fell behind 2-0 on a two-run double by Brad Fieger in the top of the first, but certainly had its chances to cut into that lead.

The Tigers put their leadoff men on base in the first three innings, but in each case, the runner was erased before reaching second base – first by being picked off and then on two double plays.

“We didn’t get off to a good start and didn’t pitch well early,” Leggett said, “and got behind the eight-ball and just couldn’t get anything going on offense.”

Miami loaded the bases with one out in the second, bringing an early end to the day for Clemson starter Clate Schmidt, who lasted 1.1 innings and allowed three hits, two walks and two runs, both earned, before giving way to Meyer.

The senior put out the fire with minimal further damage, as one run scored on a fly ball by Chantz Mack, but he got David Thompson to also fly out to end the inning with the score 3-0.

The Hurricanes added runs in the fifth, seventh, eighth and ninth innings, while the Tigers managed just four hits on the day and finished the tournament by going scoreless in their last 15 innings.

“We just couldn’t get anything offensively today,” Leggett said. “(Brian Radziewski) pitched a really good ballgame and kind of did the same thing when we played them in Miami.”

Clemson had perhaps its best chance to secure its 40th win Friday night, as it took a five-run lead into the ninth inning against No. 3 North Carolina – the tournament’s top seed – but the Tar Heels scored five in the frame, completing the comeback by virtue of Brian Holberton’s three-run homer to send the game to extra innings tied 7-7.

The contest had been going more than five hours when North Carolina again hung a five-spot on the scoreboard to win 12-7 in 14 innings – the longest baseball game on record between the two teams – and it was well after midnight by the time the Tigers departed the ballpark Saturday morning.

“It had some effect on us, I’m sure,” Leggett said. “It was a tough loss for us and a middle-of-the-night-type thing, but we’ve got to be able to put that behind us and come out and play the next day.”

The Tigers returned for a 3 p.m. start against the Hurricanes, though that was delayed by almost an hour due to the previous game between Virginia and Florida State lasting 12 innings.

Asked if the North Carolina loss had a detrimental effect on the Tigers’ play against Miami, catcher Garrett Boulware declined to use that as an excuse.

“No, sir,” Boulware said. “We trained all fall, and we play every day. We knew we had a game today to win, and we didn’t play well, but we put last night behind us and just couldn’t get anything going today.”

Missed opportunities also cost the Tigers in their tourney opener against NC State on Wednesday, a 6-3 defeat, and by the time they returned to tournament action against North Carolina, they had already been eliminated from championship game contention due to the Wolfpack’s win over Miami earlier Friday.

“It’s an extremely competitive conference,” Leggett said. “And this tournament – even though it’s not really a tournament format, if you lose or win the first game it kind of dictates what can happen later on, which is tough. But, at the same time, you just have to play your games. … We had a rough weekend, but we’re a good ball club.”