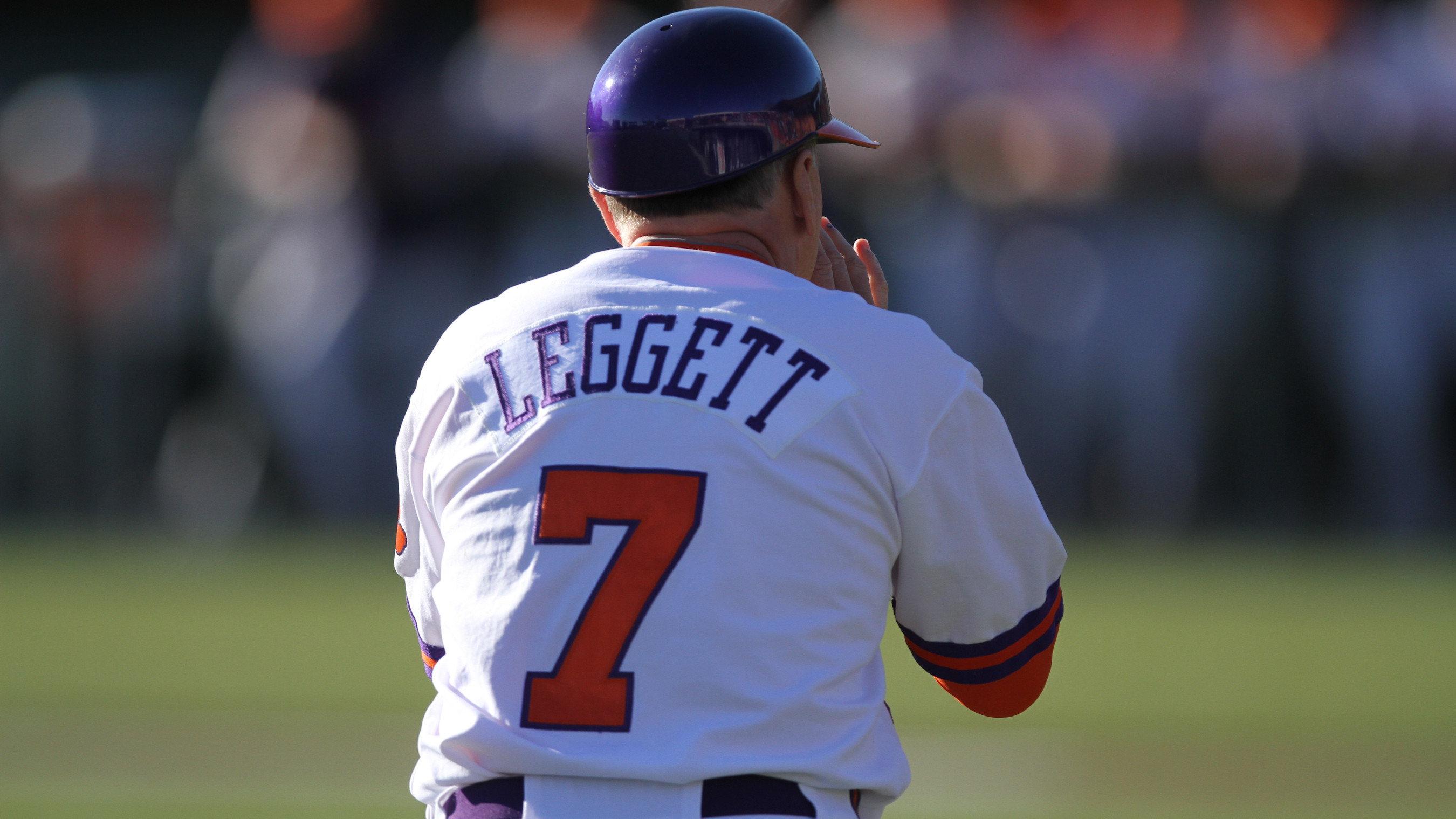 EXCLUSIVE: Leggett ‘Lets his Numbers Speak for Themselves’

CLEMSON, SC – Jack Leggett reached a major career milestone as he moved into a tie for 10th place on the all-time Division I wins list with Clemson’s 5-2 victory over Maine in the series opener Friday.

Not that his players had any idea they were part of the occasion.

“Absolutely not,” catcher Garrett Boulware said after the game when asked if he was aware of his coach’s achievement. “He talks about himself a lot, but just in a funny way. He’s not an arrogant human being at all. Stuff like that we would have never known. He’s not going to sit there and flaunt that stuff. He lets his numbers speak for themselves.”

Tigers ace Daniel Gossett (1-0) notched the win, as he went 7.0 innings and allowed four hits, one run and no walks.

Like his battery mate, Gossett was clueless about his part in making history until he was asked about it afterward.

“That’s the first news I’ve heard of it,” he said. “That’s awesome. Congratulations to him. That’s a big-time accomplishment.”

Making the moment more special, Leggett reached the mark against his alma mater.

Leggett was a standout performer in baseball and football at Maine from 1973-76. He captained the 1976 Maine team that reached the College World Series – which also featured Clemson – and was a two-time All-Yankee Conference defensive back and placekicker on the gridiron.

“I will always have a deep appreciation of where I played and the experience I had at Maine,” Leggett said. “Those are awesome memories for me, and I know the coaches and I know what they have to battle in the weather and all that kind of thing.

“So I’ve got a deep appreciation for what they do and how much travel they have to have, and they’re a solid ball club.”

After Gossett retired the side in order in the first inning, Clemson promptly loaded the bases with one out and took the lead with a base hit from red-hot right fielder Steven Duggar.

Two batters later, freshman Chris Okey laced a frozen rope off the left-field wall to score two more, and the Tigers had all the runs they would need on the afternoon.

“We played good, especially early in the game,” Leggett said. “We got three runs in the first and one in the second. I thought we had some other opportunities as the game went on, but their kid buckled down and did a nice job. Goose was very good for us, and Zack Erwin was real good for us. I thought we played pretty well overall.”

Gossett departed after the seventh, and Maine quickly mounted a threat by loading the bases with one out against the Tigers’ bullpen.

But sophomore southpaw Erwin came into the game and put out the fire by getting Steven Adam to bounce into a 4-6-3 double play.

After Gossett pitched five strong innings in his first start of the series the previous weekend only to earn a no decision, he admitted he got a little bit antsy when the tying run came to the plate.

“I was actually talking to Shane Kennedy about it, and I was like, ‘No, no, no,” Gossett joked. “But, it was all good. I have complete confidence in the bullpen, and I knew Erwin had it under control.”

The win was the 1,267th for Leggett as a college head coach, tying him with the late Ron Fraser of Miami.

Asked what the victory meant to him, Leggett said he was much more worried about the next one.

“It’s nice,” Leggett said. “It’s a special deal, and it’s awesome. But my goal right now is to get one more and get my team where it needs to be.”