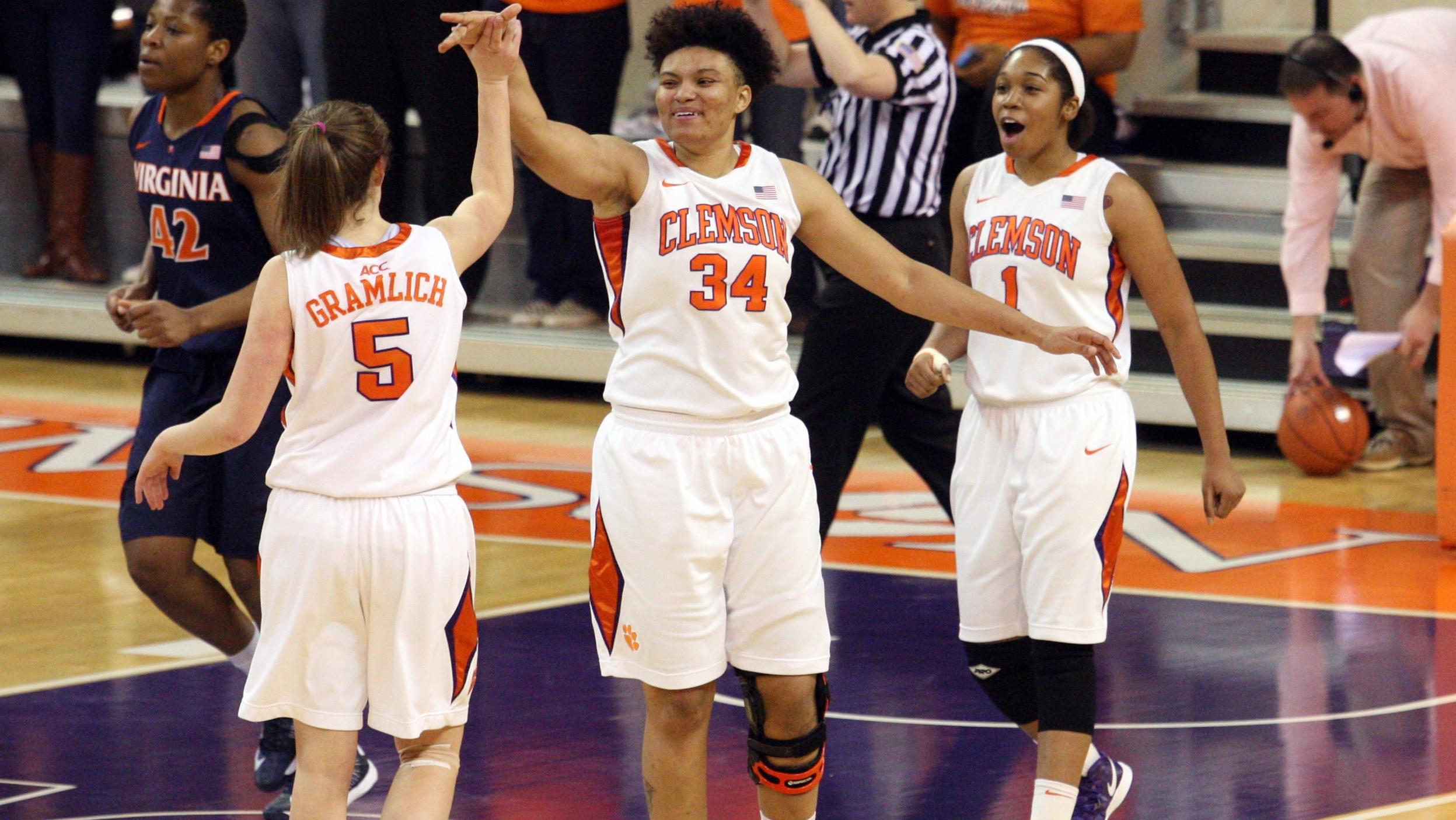 EXCLUSIVE: Lady Tigers Give Coleman Win for Her Birthday

CLEMSON, SC – Itoro Coleman celebrated her birthday Thursday. That night, her team gave her something else to celebrate: a winning streak.

Nikki Dixon drained a deep three-pointer with 35 seconds left to put Clemson ahead for the first time in the second half, as it rallied from 11 points down to beat Virginia 64-62 at Littlejohn Coliseum for its second straight win – its first consecutive wins in Atlantic Coast Conference play this season.

“It stopped my breath,” Dixon said of the shot that gave her team the lead for good. “I was definitely nervous, but we needed it, so I took it. I had confidence with it and just knocked it down.”

The Lady Tigers closed the game on a 10-0 run after trailing 62-54 with 2:43 to play.Clemson (8-18, 4-11 ACC) had also trailed by 11 in the second half against Virginia Tech last week before rallying to win, but repeating that scenario seemed unlikely after the Cavaliers quickly erased a six-point Lady Tiger lead before halftime and matched their largest lead of the night at 55-44 with 10:00 to go.

But Kelly Gramlich came off the bench and singlehandedly gave Clemson a 6-0 run with three-pointers on consecutive possessions to cut the deficit to 55-50.

“Kelly came off the bench, and she hit two clutch threes right there,” Coleman said. “That started our run, and at that point I felt like we felt like we could win the game.”

Natiece Ford‘s three-point play with 1:18 left pulled the Lady Tigers within two, and after the Cavs missed a pair of foul shots, Clemson got the ball back with a chance to tie or take the lead. Coleman called a timeout, knowing Virginia would likely look to prevent Gramlich from getting another open look from long range.

And she did just that. But the Tigers still had to finish out the final 35 seconds, and the outcome wasn’t decided until Sarah Beth Barnette’s three-point try from the corner – from the same spot where N.C. State’s Scott Wood had broken the hearts of the Clemson men’s team earlier this month – rimmed out at the buzzer.

“It bounced out, and I was the happiest little girl in the gym,” Dixon said.

Quinyotta Pettaway scored a team-high 15 points to lead Clemson, while Ford added 12 points and also nabbed seven rebounds. Ford has now scored in double figures in consecutive games for this first time in her career.

The sophomore forward’s three-point play down the stretch was crucial toward the victory, and afterward, Coleman agreed Ford’s play had been a big reason for the team’s recent success.

“We get our energy from Natiece,” Coleman said. “Natiece is no doubt one of our toughest players, and here of late she’s been coming on strong from an offensive perspective.”

Clemson now has just three games remaining in its regular season, beginning with a road trip to Boston College on Sunday. It wraps the regular season March 3 at home against N.C. State ahead of the ACC Tournament, which begins March 7 in Greensboro, N.C.

With the team on its first ACC winning streak this season, and first of any kind since December, Ford feels the Lady Tigers’ team chemistry gives them a chance to make some noise down the stretch.