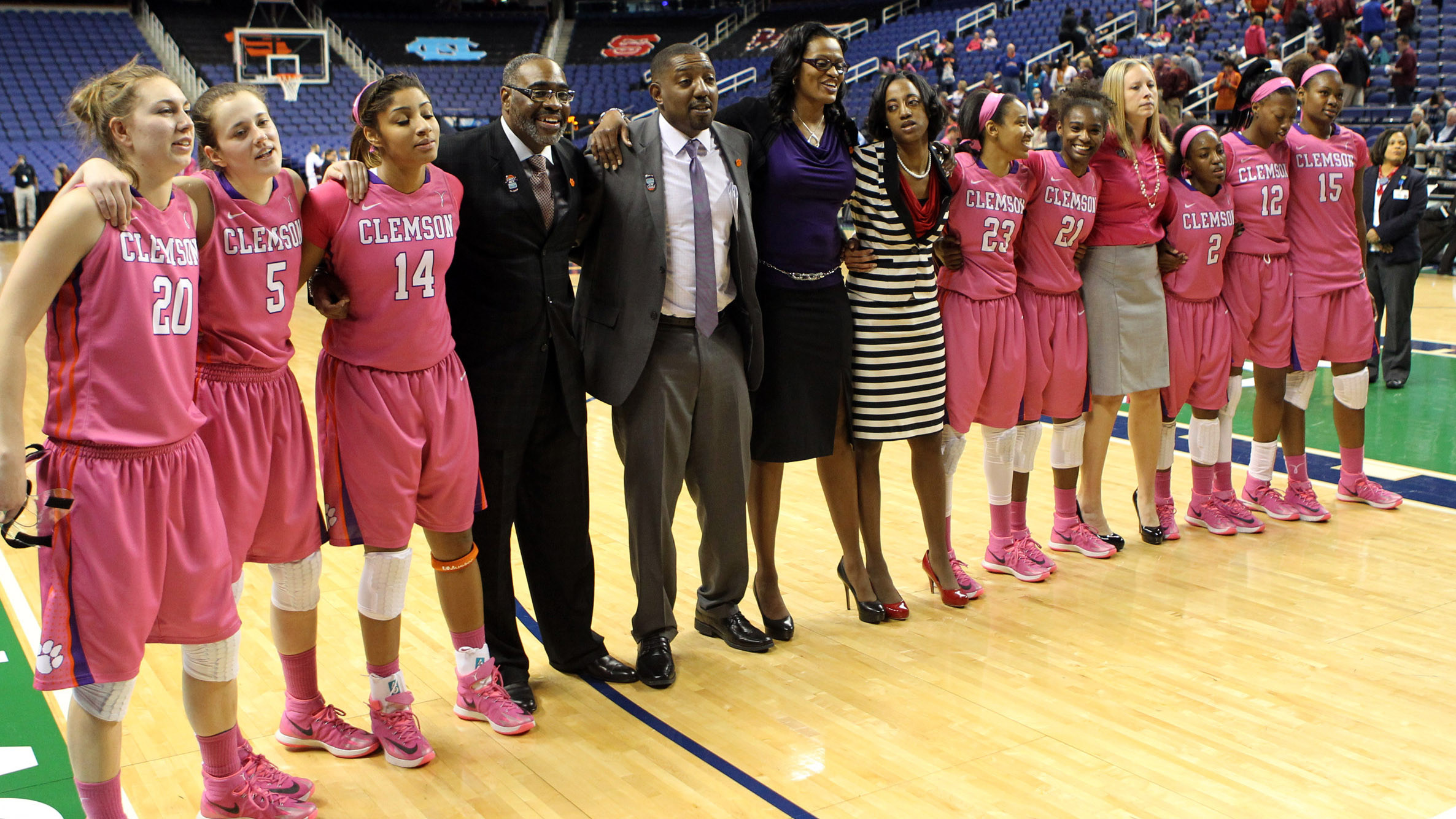 GREENSBORO, NC – Junior wing Nikki Dixon says Wednesday’s ACC Tournament win is a sign of the change taking place in the Clemson women’s basketball program. It was certainly a big change from six days earlier. The names Uju Ugoka and Vanessa Panousis had been front and center in the Lady Tigers’ minds ever since the Virginia Tech duo combined for 36 points in handing them a 26-point loss in the regular-season finale Feb. 27. Going into the rematch Wednesday at the Greensboro Coliseum intent on containing them, the Lady Tigers held the Hokies inside/outside tandem of Ugoka and Panousis to two points in the first half and rolled to a 69-56 win, Clemson’s first at the league tourney in exactly five years to the day. Ugoka did ultimately finish with 20 points and nine rebounds, but the lion’s share of that production came with the Lady Tigers up by double digits in the second half. Afterward, first-year Clemson head coach Audra Smith directed the credit for limiting the Hokies’ star players to her own players, whom she entrusted with developing the scouting report for the rematch. “Their whole focus, anytime there was a ball screen they were going over the top on Panousis,” Smith said, “and they made sure we limited her touches as much as possible and were in her face the entire time.  “On Ugoka, the biggest thing was that they wanted to play off her and make her be a jump shooter and not get any penetration to the basket and limit her touches. It was a team effort.” Clemson’s first-half dominance was the key to the victory, as it opened up a quick lead through four early points each from Nyilah Jamison-Myers and Paige Mosley and eventually led by as many as 21 points before halftime. “They played with a dire sense that they were not ready to go home and they were going to give all that they had,” Smith said, “and they did. I felt like our defense was what catapulted us into playing such a well-balanced game, and I’m very proud of how hard they played considering we did not play as well against Virginia Tech the first time.” Dixon tallied a first-half double-double with 11 points and 10 rebounds before the break, and she finished with 22 and 12. Jamison-Myers also reached double figures in the first half and finished with a career-high 19 points. “I feel like we were just ready for this game,” Jamison-Myers said. “We helped with the scout, we helped with the practice, and the whole team was really into it. We felt what the coaches feel when they prepare for a game — when you put all that into a game, you want to come out with a win, you don’t want to fall short.” The Hokies trimmed the Lady Tiger lead to 12 with a 15-6 run across the halftime break, but Kelly Gramlich buried a three-pointer from the corner over Panousis to stymie the spurt. The Hokies used a 7-0 run and a scoring drought of 6:14 from Clemson to trim their deficit to single digits, but Dixon buried a free-throw line jumper to end her team’s dry spell and then made a pair at the foul line to extend the lead back to 13. Jamison-Myers’ baby hook with 2:53 to go made it 63-48 and gave her a new career high with 19 points for the game. “I feel like all season I’ve been trying to work on my consistency, and what I told myself before the game was just, ‘Be there. Whatever they need you to do, just be there,’” Jamison-Myers said. “So I’m just happy that I could finish my layups and make my free throws today.” Clemson only brought eight players to the event, and each of the Lady Tigers played significant minutes with the exception of freshman Jordan Gaillard, who started 17 games this season but only saw one minute of action as she nurses a broken nose. There will be no rest for the weary, however, as Smith’s squad will be back in action Thursday morning at 11 a.m. against fifth-seeded Syracuse, meaning they will have played twice before eight teams in the tournament field have even taken the court. The Lady Tigers fell to the Orange 84-75 in their only meeting of the regular season at the Carrier Dome back in January, but Clemson led by as many as 12 points in the first half of that game before a late 18-0 run sealed its fate. “We played 37 minutes of really good basketball, and the last three minutes, I felt like Brittney Sykes just woke up,” Smith said. Freshman guard Sykes was 13th in the conference in scoring in the regular season at 17.1 points per game, and sophomore sharpshooter Briana Butler led the league with 93 three-pointers on the season (3.2 per game). “For us, again, the key is going to be the defensive end,” Smith said. “They have some really good threats from the outside to the inside, but we’ve got to get some rest. We’re limited in terms of our numbers, so we have to get some rest and be focused tomorrow and be ready to defend.” The Lady Tigers’ win marked the first-ever Wednesday win at the ACC Tournament for any team with the event’s expanded format, and it marked their first win since they advanced to the quarterfinals in consecutive years in 2008 and 2009. “It means everything in the world to this program,” Dixon said, “because we have such a great fan base and such awesome families that come and support us. It means a lot to this team, period, because of all the adversity we’ve been through the last three years.  “And to our seniors, I know they’re jumping for joy right now. This is the start of a change.” 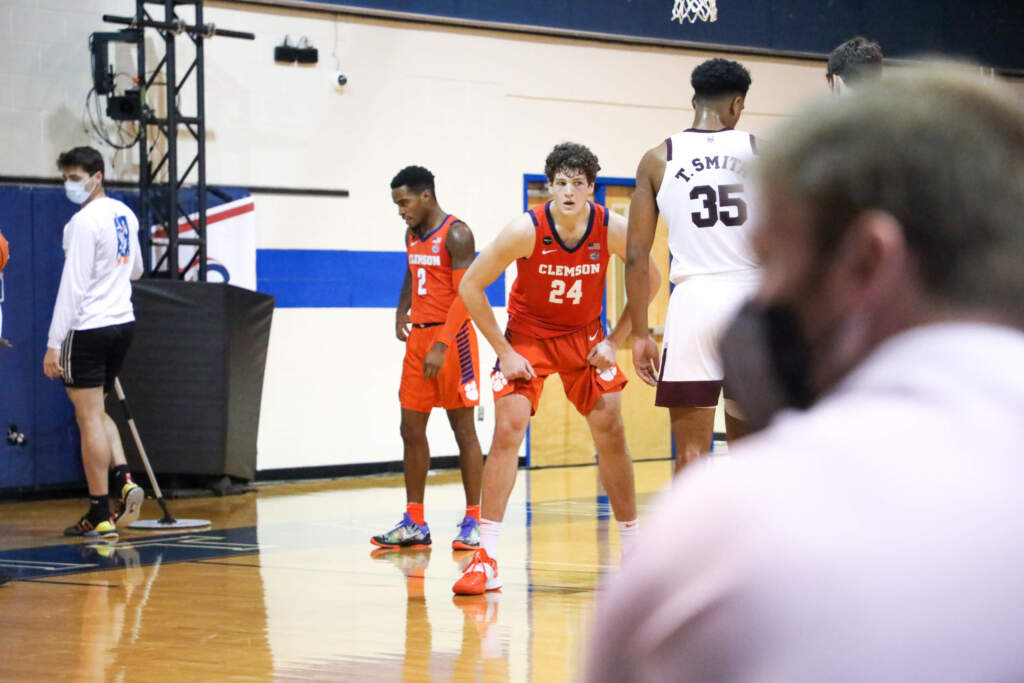