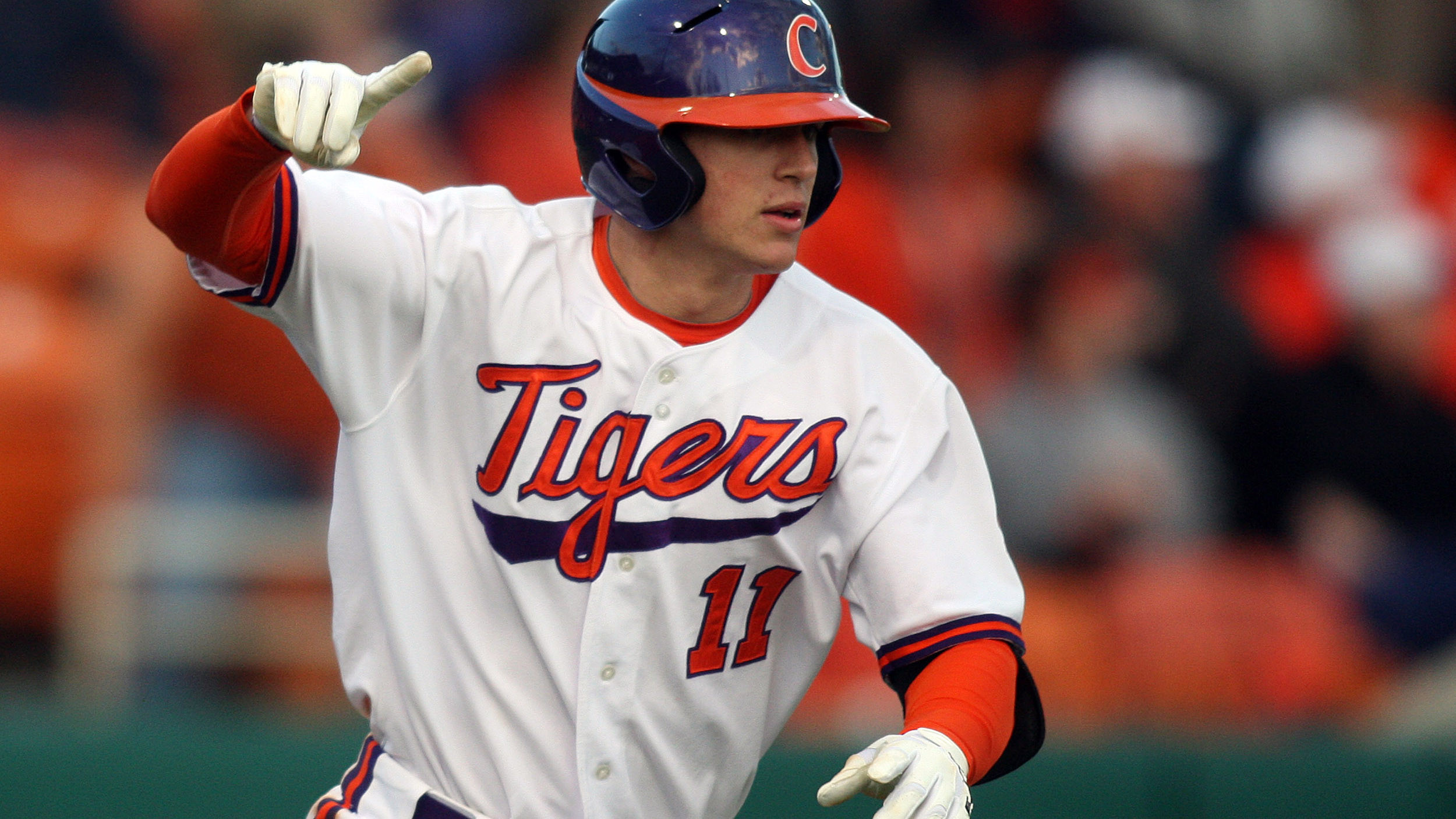 CLEMSON, SC – Talk about starting with a bang.

On an opening day when it looked like neither team might manage to scratch out a run, designated hitter Shane Kennedy provided the extent of the offense in the eighth inning with one swing of his bat by launching a two-out, two-run blast into the bleachers in left field at Doug Kingsmore Stadium to deliver Clemson a 2-0 win over William & Mary in its 2013 season opener and his debut with the Tigers.

“To do it opening day was awesome; the fact it was my first Clemson game was even better,” Kennedy said afterward. “I struggled my first three at-bats, and I was really just trying to make contact with the ball. I got lucky enough, and it went.”

After the teams breezed through seven and a half scoreless innings, Clemson quickly made two outs in the bottom of the frame. Steve Wilkerson reached base with a bunt single, but certainly no real danger seemed afoot – until Tribe starter Brett Koehler delivered the first pitch to Kennedy.

Kennedy went to the plate looking for a fastball and got it. The right-handed hitter, a junior college transfer who arrived on campus in August, turned on the first pitch he saw and blasted a drive into the proverbial cheap seats for the only runs of the day.

With a team that returned only nine career home runs on its entire roster, Kennedy knew entering the season that the pop in his bat might provide an opportunity for immediate playing time. Batting cleanup on opening day and delivering the game’s biggest hit, suffice it to say he’s made the most of that chance thus far.

“I know that’s one of the reasons they recruited me was for my bat, and that’s kind of what they expect out of me is to hit,” Kennedy said. “So, I was definitely looking forward to being in the lineup.”

After preaching in the preseason how his team would need to win games by playing small ball, Clemson head coach Jack Leggett saw the irony in the opening-day win coming by virtue of a home run.

“We did a little bit of both actually,” he said. “Without the base-hit bunt, we wouldn’t have extended that inning, and then we got the home run by Shane. We just weren’t able to build many innings and get our leadoff man on and bunt some guys around and hit-and-run at all. We couldn’t get many base runners in the right situations to steal some bases.

“So, we were kind of feeling our way through the ball game, and we were lucky our pitching and our defense held up.”

That all started with starting pitcher Daniel Gossett. The sophomore staff ace went 6.2 innings, allowed four hits and no runs, walked one and struck out six. He threw 76 pitches, 60 of them for strikes, before giving way to Joseph Moorefield in the seventh inning with the game still scoreless.

“It felt great to come out here and get the first one out of the way,” Gossett said. “I was thinking to myself, ‘Just get the first inning out of the way.’ And once I did that, I was just rolling.  (Pitching coach Dan Pepicelli) was talking to me about working everything down in the zone, so I just focused on keeping everything down in the zone and just threw the baseball.”

While Gossett ultimately earned no decision – Clay Bates (1-0) nabbed the win and Matt Campbell (1) the save – that did nothing to detract from his excitement when Kennedy’s bomb left the yard.

“Kyle Whitman and I actually called it,” Gossett said. “We were like, ‘We need a home run right now. That would be huge.’ And to see it go, that was insane.”

Kennedy earned freshman All-American honors at North Florida in 2011, but said he wanted to take his talents to a higher level. After a year in junior college, Kennedy signed with Clemson last fall despite having never even visited campus.

But Kennedy played high school ball at Olympia High in Orlando, Fla., with a pair of former Tigers, Brad Miller and Dominic Attanasio, both of whom shared how much they loved playing at Clemson.

“They said it was the place to be,” Kennedy said. “A phone call here and there, and (Tigers assistant coach Bradley) LeCroy came and watched me at a game – and it kind of went from there.”

Kennedy’s reaction when he arrived on campus in August? “A dream come true,” he said.

That description would certainly be fitting to describe his Clemson debut, as well.