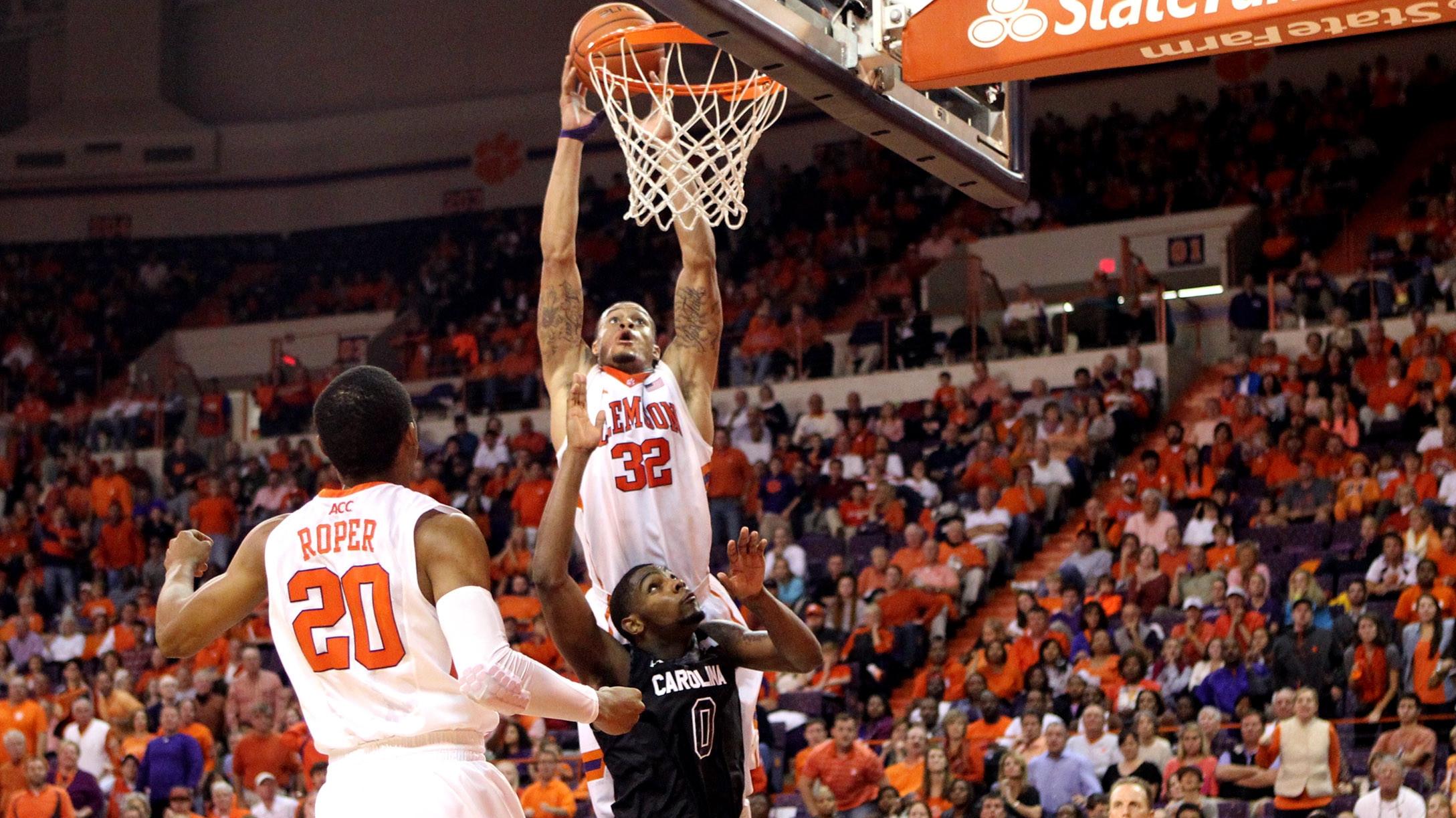 CLEMSON, SC – Having seen a 13-point lead slashed to one by rival South Carolina, Brad Brownell suspects if you’d polled the crowd at Littlejohn Coliseum most would have been skeptical of Clemson’s chances at that point.

Instead, K.J. McDaniels and Rod Hall did what veteran leaders are supposed to do. They took over the game.

Leading 40-39, McDaniels and Hall combined to score all 10 points in a 10-1 run that restored a double-digit lead and helped Clemson cruise to a 71-57 win Sunday night.

“To be honest with you, we got control of the game pretty quickly right after they cut it to one and never lost control again the rest of the way,” Brownell said. “That was good to see because our guys played with poise down the stretch and executed on both ends of the court.”

During the run, which lasted 2:50 after the Gamecocks’ Michael Carrera trimmed the deficit to a single point with a layup, McDaniels had seven points, two boards, a steal and a block – and two resounding dunks – and Hall had three points, two assists and a rebound.

“I look at those two guys as really good leaders right now,” redshirt freshman power forward Jaron Blossomgame said Tuesday as the team prepared to depart for the Charleston Classic, where they will begin tournament play Thursday. “K.J. has been stepping up in the majority of games we’ve had, playing big minutes and putting up big numbers – and that’s really helped us a lot in the past three games.”

The only two two-year veterans on the Tigers’ team, McDaniels said neither he nor Hall are the most vocal of leaders by nature, but they are making a concerted effort to improve in that regard.

“We discuss it a lot between each other, just saying we have to sacrifice a little bit and do a little extra for the sake of the team since we’re the oldest,” McDaniels said. “Rod and I are getting over into the leadership role, and we just have to keep improving on it and keep motivating each other to do better and be better as leaders for the younger players.”

McDaniels leads Clemson with 17.3 points and 7.3 rebounds per game, and Hall and sophomore combo guard Jordan Roper are both also averaging in double figures at 10.3 points apiece.

Versatile wing player Damarcus Harrison has also scored in double figures in two of the team’s first three games, as the Tigers’ perimeter players have led the team to a 3-0 start to the season, including Sunday’s emphatic win over its archrivals.

“We’re pretty confident. 3-0 is obviously a great start for the team we have, a pretty young team,” Blossomgame said. “We honestly believe we can win the tournament or at least do pretty well. We’re playing well right now, and we want to carry that over into the tournament.”

A weekend trip to the Lowcountry is not exactly the same as the 10-day excursion to Italy the team made this summer, but Blossomgame is just happy he will get to play this time.

“It will be my first trip with the team playing, so it will be exciting for me,” said Blossomgame, who was still recovering from a broken leg when the team went on its tour of Italy. “I sat out last year, so this is really my first time playing away from Clemson, so it will be something big for me.”

The Tigers will face Temple (1-2) on the first day of the tournament (8 p.m., ESPN3), and then play games Friday and Sunday with the time and teams to be determined.

The winner of Thursday’s game will face the winner of Davidson and Georgia in the second round Friday.

Clemson also faced the Owls in the championship game of the inaugural Charleston Classic in 2008, when the Tigers won 76-72 to take the title.

“I think our team right now feels good about themselves and really gets along, and I think it shows in our play,” Brownell said. “I think our guys have been very spirited in the way we’ve competed, and guys seemed to be cheering for each other and very supportive. It’s not an easy situation, because we have so many guys and everybody wants to play and it’s very competitive in practice.

“But it’s been very healthy so far, and guys are excited about a trip to Charleston and a chance to play some good teams in a neutral site.”