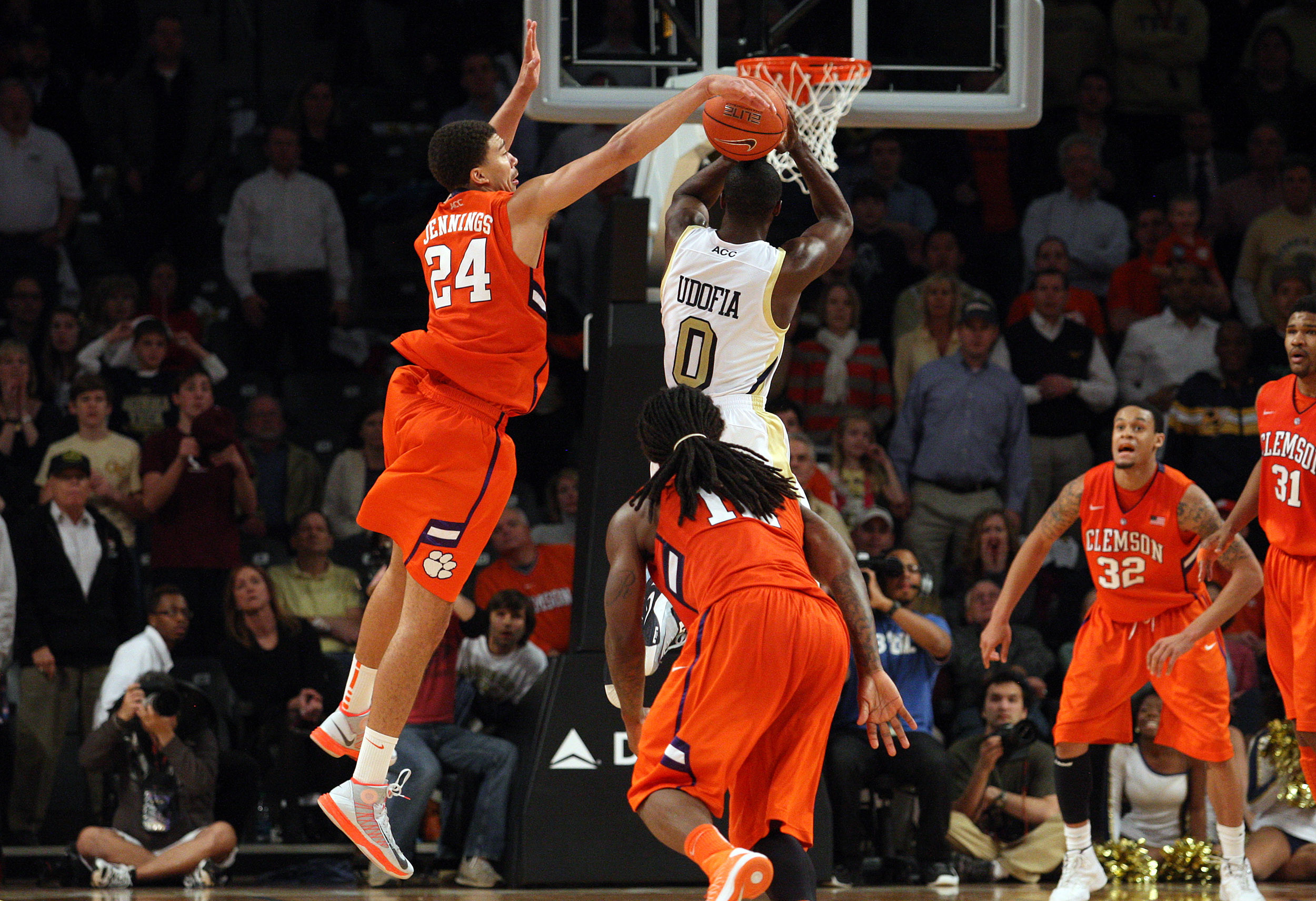 ATLANTA, GA — It felt like an all-too-familiar refrain about to be played once again for the Clemson basketball team, and particularly senior forward Milton Jennings.

But after letting a 12-point lead dwindle to two inside the final minute at Georgia Tech on Thursday, this time Jennings and the Tigers made the plays they needed to walk away with the win — their first in six tries on the road in ACC play this season.

“We’ve been close a couple times: heartbreak at Florida State, where we led almost the entire game, and then at NC State, we’re right there with a minute to go and had a chance to tie on the last possession,” head coach Brad Brownell said afterward.

“We’ve been knocking on the door a couple of times, and it’s good to really get through it and get one.”

While some might characterize Clemson’s 56-53 triumph as an ugly win, it could not have been more beautiful to Jennings.

After missing the front end of a late one-and-one that could have iced a victory over NC State the previous weekend, a game the Tigers lost on a last-second three-point shot, Jennings again stepped to the line with a chance to clinch the victory Thursday.

“I’m not going to lie — that free throw was probably the hardest free throw I’ve ever taken in my life,” Jennings said of his attempt with Clemson leading 55-53 with seven seconds left.

But Jennings knocked it down. And while he missed the next attempt, he blocked a potentially game-tying three-point shot by Tech’s Mfon Udofia on the other end to secure the win for the Tigers.

“We needed that win a lot for our psyche,” Brownell said. “I was really happy for Milt to make a free throw down the stretch and then get the big block and a rebound in the last minute. I thought he made three good plays there to help us win.”

Afterward, Brownell said he was particularly pleased for Jennings, who felt he let his team down with his late miss against N.C. State.

“He hasn’t worn it around his neck every day, but he certainly knows and feels bad and hasn’t been real cheery,” Brownell said.

The Tigers have now won seven straight meetings with their league rivals — and all six under Brownell — to take a 63-59 lead in the all-time series. The game marked Clemson’s first visit to McCamish Pavilion, built on the same space occupied by the Yellow Jackets’ former home, Alexander Memorial Coliseum.

“We stuck together,” said Devin Booker, Clemson’s other senior. “We kept telling each other in the huddles, ‘We’re not going to let this one slip; we’ve let too many slip already — and we’re just going to stick together and play it out till the end.’ And that’s what we did.”

Tech wouldn’t go away, however, and went on a 10-2 run of its own to pull within four, 51-47. But while the Jackets eventually pulled within two inside the final minute, Jennings’ fine work on both ends of the court prevented the margin from ever getting closer.

“He definitely felt great after the game,” Booker said of his fellow senior. “He was the main one in the locker room jumping around and yelling and screaming.”