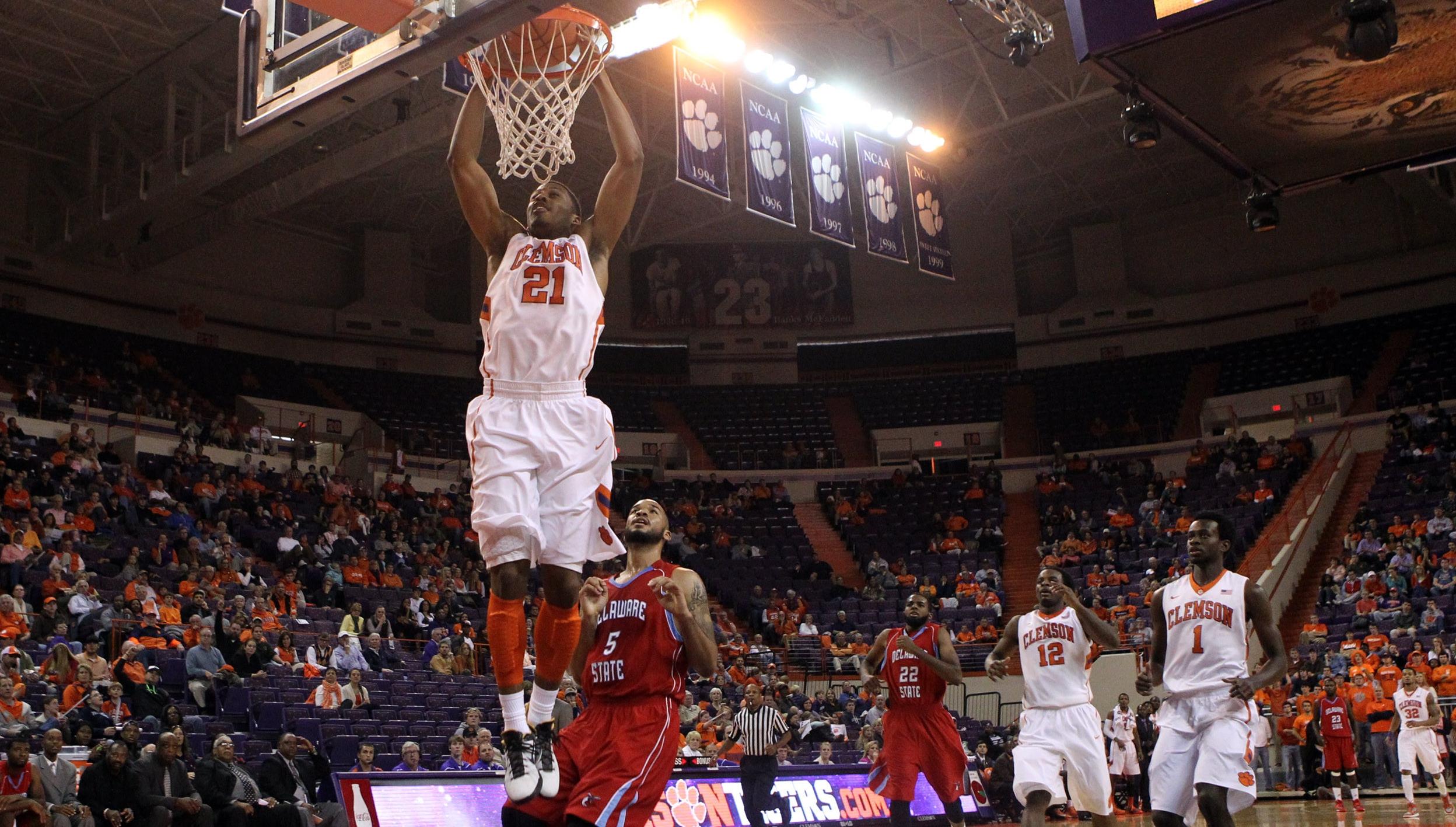 EXCLUSIVE: Harrison Off to Hot Start after Altering Shot

CLEMSON, SC – Damarcus Harrison was able to dismiss his coach’s pleadings for an entire season, but couldn’t ignore what he saw on the stat sheet at the end of it.

After Clemson Head Coach Brad Brownell spent much of the 2012-13 season trying to convince the 6-foot-4 guard to change the form on his jump shot – an overhead motion that produced a trajectory Brownell likened to a “rainbow” – Harrison couldn’t argue with the 22.4 percent he shot from three-point range last season.

“You shoot one way all your life, you think you know how to shoot,” Harrison said. “But when the stats say you’re not making any, it’s time to change something. I just took the coaching, changed my shot a little bit and shoot it with confidence, and I’ve been making shots lately.”

Harrison made 4-of-8 from the field, 2-of-4 from three-point range and 5-of-6 from the foul line Wednesday in scoring a game-high 15 points to lead the Tigers to a 58-37 win over Delaware State at Littlejohn Coliseum.

“I don’t want him falling in love with his three,” Brownell said. “I want him to have a mix to his game, and I thought he did tonight.”

The game was the second straight double-figure scoring effort for Harrison to start the season, as he scored 10 points in a season-opening win over Stetson. It was just the second time in 33 games at Clemson he has reached double figures in back-to-back games.

“It’s a new year,” Harrison said. “I’m older. I feel good. I’m more in shape this year, and I just have a lot of confidence. I’m just playing my game and letting stuff come to me.”

Of course, there was a time when there were hardly any guarantees Harrison would even be part of the team this season.

After transferring into the program from BYU after his freshman year, he originally planned to take a Mormon mission starting in the summer of 2013.

But after already leaving one program and spending a season settling into another, Harrison said he couldn’t shake the desire to actually get comfortable in a system and put together a complete season.

“I wanted to continue playing basketball,” he said. “I wanted to put a good season together because I never knew what it would be like, so I didn’t want to go out right away and go on that mission. I feel better now just playing consecutive seasons, and I think I’m going to have a good year this year.”

Instead of going on his mission, Harrison postponed those plans indefinitely and stayed in Clemson over the summer to work on his game – and primarily his shot.

“We’ve had a lot of morning sessions, and I think he’s improved tremendously,” Brownell said. “He still has a ways to go, but he’s flattened it out a little bit, got the ball more in front of his face, and I think he’s seen a couple balls go in. And that’s a big thing.”

But Harrison brings more than shooting and scoring ability to the Tigers, although that is certainly a bonus.

A versatile 6-foot-4 wing who plays bigger than that, Harrison can play anywhere from the two to the four in Brownell’s system, which gives the Tigers an ability to adapt their style to match up with a variety of teams.

Against Delaware State, for example, the Hornets took one of their big men out of the lineup and went small in an effort to beat the Tigers with long-range shooting.

Instead, Brownell countered by going with a small lineup of Rod Hall, Jordan Roper, K.J. McDaniels, Harrison and one big man of his own, and Clemson limited Delaware State to 1-for-13 shooting from beyond the three-point line.

“That’s why I like our team this year: I think we have a lot of matchup problems for other teams,” Harrison said. “We have multiple guards who are good on offense and defense, and we can push in transition or we can hunker down and guard on defense. I think we can throw some teams off.”

With Harrison’s versatility, he can also guard a number of different positions, which makes him a unique asset for the Tigers – particularly when his shot is going in as it has the first two games.

Harrison also has the basketball IQ to allow himself to be incorporated at a number of different positions without being given a great deal of instruction.

Brownell said he chose to use him at the four instead of McDaniels because he felt Harrison had a better grasp of the position, despite one less year in the system.

“I just felt it out and just played it,” Harrison said. “I don’t even do it in practice that much, but it’s whatever Coach wants.”

And doing whatever his coach wants is something Harrison knows he’d have been well served to start doing a lot sooner.