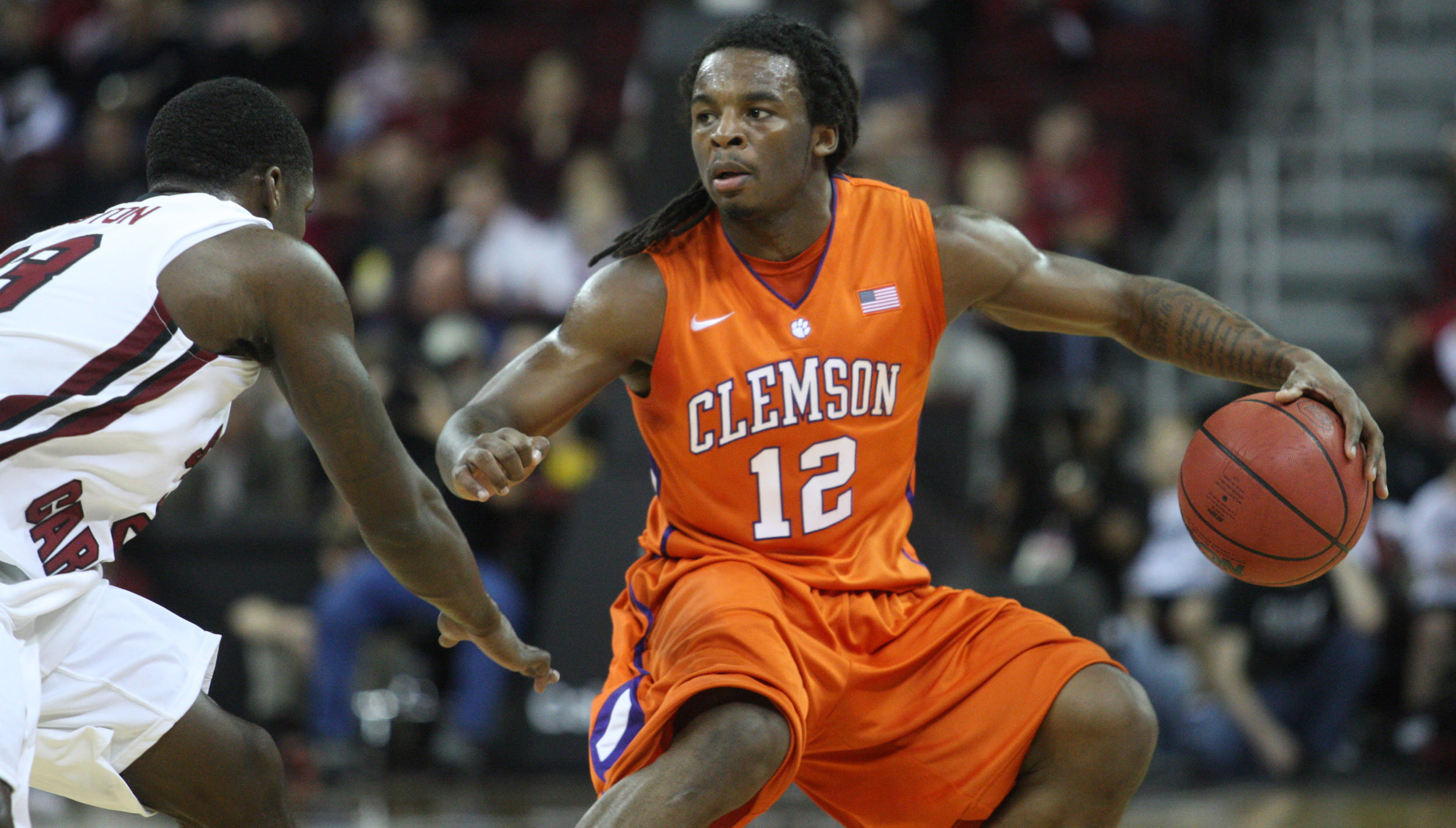 COLUMBIA, SC – Rod Hall has been a steadying influence on Clemson’s young backcourt early this season. Sunday at rival South Carolina, he had a steady hand from the foul line, too.

Hall made six free throws inside the final 2:48 – as part of 10 foul shots in a row the team made – and scored 15 points to help the Tigers snap a two-game losing streak to the Gamecocks, 64-55, at Colonial Life Arena.

“That’s about all I worked on over the summer – shooting,” he said after the game. “I think I did a lot better.”

Hall, who made 9-of-12 from the foul line on the day, came into the game as the ACC leader with a 4.6 assist-to-turnover ratio. As one of only two veterans in the Tigers’ backcourt, albeit still only a sophomore himself, Hall says he’s been made well aware what his role is on the team.

“I have to be the leader,” Hall said. “Coach (Brad Brownell) always says I don’t talk, so I have to guide them on what to do and how to do it, and I think I’ve got to play a big leading role in the backcourt.”

Hall had four assists against three turnovers versus South Carolina’s high-pressure defense, and Brownell said Hall’s winning mentality made a difference in the game.

“He wasn’t heavily recruited at all, but Rod’s a guy who likes to make winning plays; he’s a tough player,” Brownell said. “He’s not afraid to put his shoulder down and drive to the basket and play through contact. He’s not a great shooter, but he’s one of those guys who can make opportunistic free throws. He’s just a guy that we trust, and his will to win was big tonight.”

Hall has been part of a three-man rotation at the point guard spot, starting ahead of true freshmen Adonis Filer and Jordan Roper. Sunday, the Tigers were often forced to play two point guards at the same time to deal with the Gamecocks’ pressure.

“We had to get the people who are the most scrappy in, the people who were going to dive on the floor and make sacrifices and make the game-winning plays and change the game,” Hall said. “So, we went small.”

That meant even more playing time for some of those young guards. Filer and Roper played 29 and 16 minutes, respectively, against the Gamecocks, and Clemson’s small lineup forced 19 turnovers that led to 23 points in the game.

After trailing briefly in the early part of the second half, Clemson extended its lead to 12 once again on six consecutive points from Devin Booker that made it 49-37.

Back-to-back three-pointers by Brenton Williams began a 10-2 South Carolina run to cut the lead to 51-47, but Damarcus Harrison quieted the crowd by draining a wing three on the Tigers’ next possession.

“I just wanted to make one,” Harrison said. “I’d missed one earlier, and I got it back in the same spot two times in a row, so I knew it was going in the second time.”

His three-point shot turned out to be the impetus for the Tigers to pull away, as they went on a 9-1 run to stretch their lead to as many as 12 inside the final minute and then put the game on ice from the foul line.

Harrison, another newcomer to the Tiger backcourt as a sophomore transfer, said Hall’s steadying influence played a big part in helping he and the rest of the team’s young guards play with confidence.

“He’s definitely stepped up to be a leader this year on this team,” Harrison said. “He controls the offense, and he gets us into everything we need to be in. The coaches like him; he’s one of the toughest players on this team.”

Joining Hall in double figures for Clemson were K.J. McDaniels, who had a game-high 16 points, and Booker, who had 13.

After snapping their two-game skid against the rival Gamecocks, McDaniels called it “just a win for us.”

“But it is important for Clemson because we wanted to be the first team to turn it back around on South Carolina,” he added. “I believe we came out and did that.”