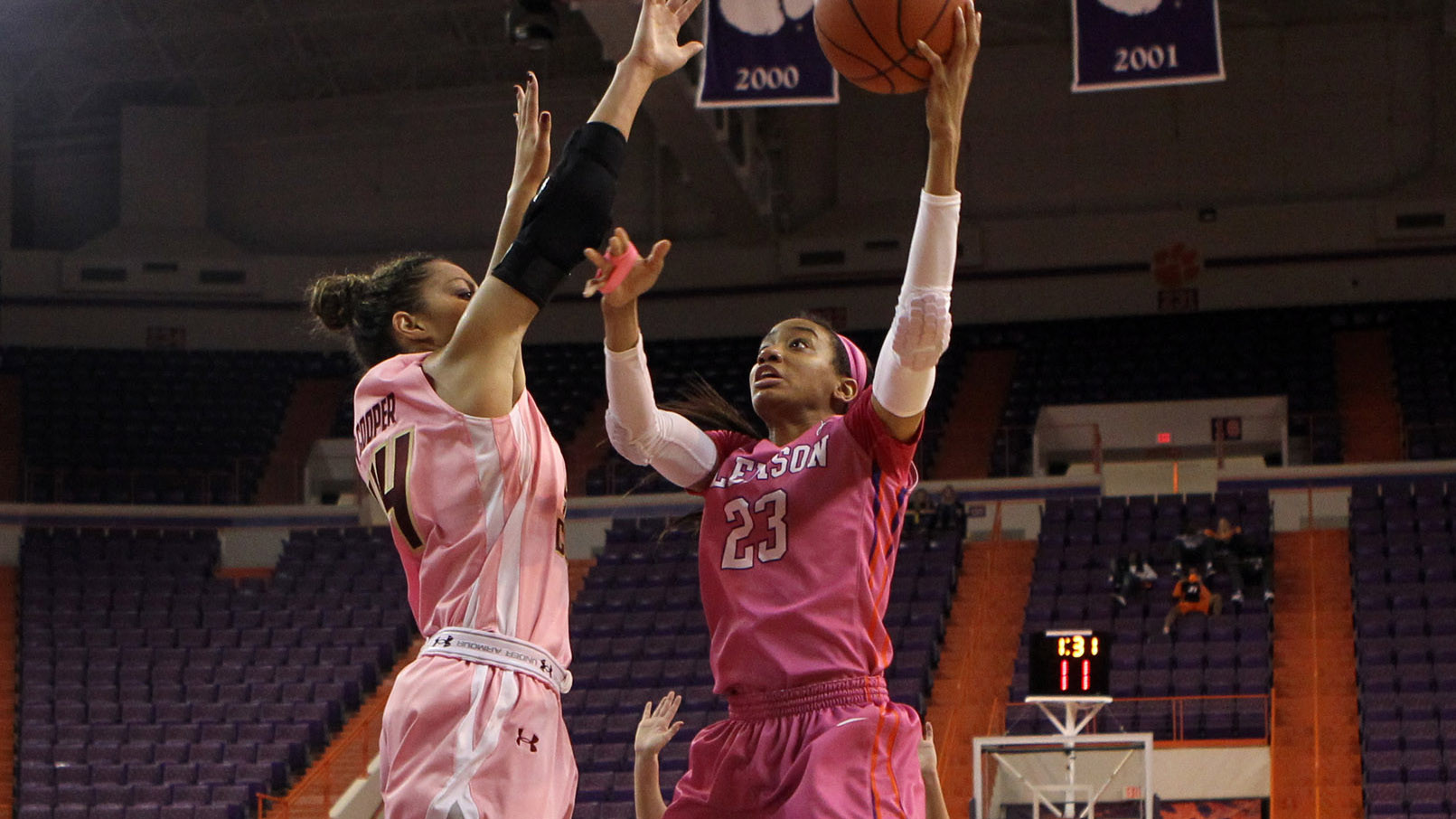 EXCLUSIVE: Dunn Goes Into Attack Mode in Win over BC

CLEMSON, SC – As she heads down the home stretch of her college career, Chancie Dunn has flipped the switch into attack mode. “That’s what I put in mind — just to attack, attack, attack,” she said of her mentality going into Thursday night’s game against Boston College. Without its top three scorers in the starting lineup for the contest, Clemson knew it needed somebody to pick up the slack. Dunn answered the call with aplomb to help the Lady Tigers survive an early three-point barrage by the Eagles and rally from a double-digit deficit to win 70-67 at Littlejohn Coliseum. The August graduate finished with a career-high 22 points on 10-of-18 shooting and added five rebounds and three assists from her guard spot to help Clemson snap a five-game skid. Head coach Audra Smith and her staff had been urging Dunn to play with aggression on offense all season, but Dunn says the message finally sank in after associate head coach Daryl Oliver repeatedly drove the point home in the lead-up to the game. “I’ve been practicing the shots around the free-throw line,” she said, “and I knocked down those shots tonight. So that’s all he was pretty much saying: I’ve got to knock down the shots when I’m open, and I’ve got to attack the basket.” The Eagles held a 27-16 lead early and hit six of their first eight shots from behind the arc, but Dunn — who came into the game averaging 7 points in Atlantic Coast Conference play — scored 17 first-half points to keep Clemson afloat. “We need her to do more of that,” Smith said. “She was the saving grace for us in the first half.” Dunn’s bank shot just before the halftime buzzer sent the Lady Tigers into the locker room with a 41-36 lead. She eclipsed her previous season high for an entire game — 15 on Nov. 10 against Wofford — in the first half alone, and Clemson (12-16, 4-10) never trailed after halftime. “We knew that they could shoot, and we knew they were going to knock down some shots,” Dunn said. “I told my teammates, ‘Just keep your head up. If they knock down shots, we can’t put our heads down and be sad about it. We just have to keep fighting and keep playing hard.’” The 5-foot-7 guard scored four of the first seven points for the Lady Tigers to stake them to a 7-2 lead less than two minutes into the action. BC went on a 6-0 run to take its first lead, but Dunn restored the Clemson edge with a drive to the hole to make it 9-8 four minutes into the game. Dunn kept the Lady Tigers within three with a three-point play, but BC made four of its first five attempts from three-point range and stretched its lead to double digits, 27-16, with 11:44 left until halftime. “We weren’t switching properly and weren’t rotating out to shooters, and we were leaving shooters wide open,” Smith said. “So, I made them stay in there and made them stay in man (defense), and they played their way out of it and started getting stops. “Once we started getting stops, then we started getting some transition buckets and we kind of settled down and got ourselves going.” Dunn reached double figures midway through the first half, as Clemson went on a 7-0 spurt to pull within four on a three-pointer by Jordan Gaillard. Clemson retook the lead on a coast-to-coast layup by Nikki Dixon that made it 33-32 with 3:28 left in the half. The basket capped a 17-5 run since BC took its largest lead. Dunn’s turnaround jumper put Clemson up three with 2:40 left in the opening half, and a little later, she came up with her own rebound and laid it in to make it 39-34. She capped off her sensational first-half performance by banking in a jump shot just before the halftime buzzer to send the Lady Tigers into the locker room up 41-36. Dunn then surpassed her career high with a layup with 15:35 left in the game to give her 19 points on the night. Dixon and Quinyotta Pettaway did not start, though they both played primary roles, and Charmaine Tay was in street clothes with an Achilles injury she aggravated in practice. They were the team’s top three scorers coming into the game, respectively. Dunn responded with her 10th double-digit scoring game of the season and the first time surpassing 20 points in her career. She eclipsed that plateau with a fast-break layup that made it 53-48 with 10:53 left. “It was huge,” Smith said of Dunn’s performance. “Obviously she stepped up to the challenge, and credit to Chelsea (Lindsay) and her other teammates for finding her in open spaces and to her for being composed and knocking down shots.” Dixon and Pettaway each finished in double figures, as well, with 19 and 11 points, respectively, while Kelly Gramlich also added 15 points. BC pulled within two inside the final minute of the game, but Dunn made one of two at the line to provide a cushion and Gramlich made six straight foul shots to provide the final margin. Next up for Dunn and the Lady Tigers is her Senior Day game against Florida State on Sunday, followed by the regular-season finale against Virginia Tech on Feb. 27. On the heels of her performance against BC, Dunn admitted her confidence is high as she enters the stretch run of her college career. “I was actually surprising myself with some of the shots I was knocking down,” she said. “I was just smiling like, ‘This must just be my night,’ because it was like I couldn’t miss. I hope I can continue doing it for the next two games.”