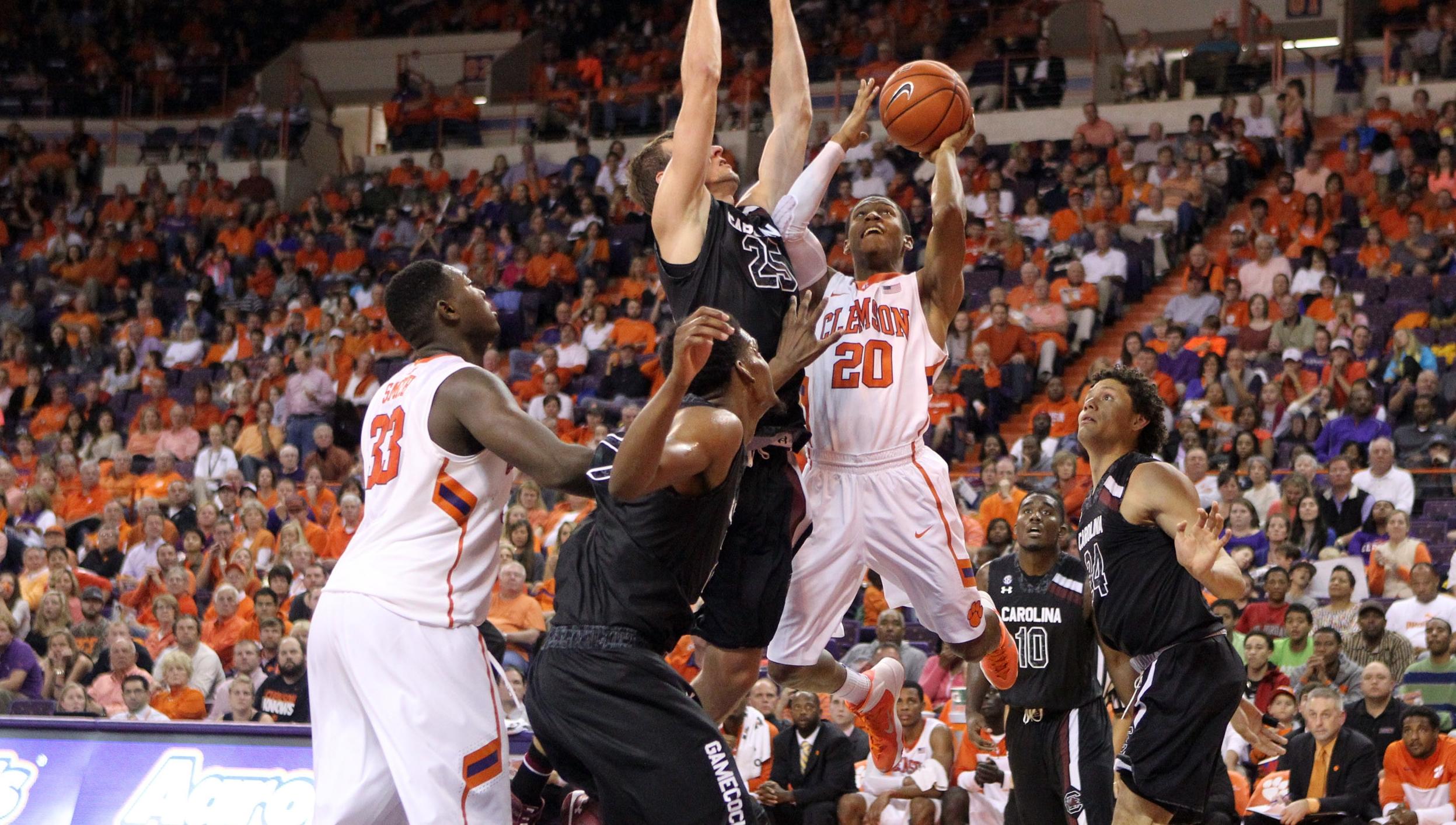 CLEMSON, SC – Brad Brownell said during the offseason that depth would be the strength of his team this season, and it sure seemed like the Clemson head coach knew what he was talking about Sunday night.

Of course, it didn’t hurt having K.J. McDaniels on the team either.

The Tigers used 11 different players as they led by as many as 18 points in the game and rolled to a 71-57 win over rival South Carolina at Littlejohn Coliseum.

“Depth is a big factor for our team,” McDaniels said. “We have a lot of people who can do multiple things, we just have to stay focused and everybody has to go out there with the right mentality.”

Nobody had the right mentality more than McDaniels.

Counted on to be the star player for the Tigers this season, he did what star players are supposed to do – took over the game when his team needed him to.

After Clemson led by as many as 13 in the first half, the Gamecocks scored the first six points out of halftime to trim their deficit to three, but an old-fashioned three-point play by McDaniels stretched the edge back to 38-32.

The Gamecocks soon pulled within one on a bucket by Michael Carrera, but his free throw to tie the score for the first time since 4-4 rimmed off, and McDaniels flew in for a jam on the other end to restore a three-point edge for the Tigers at 42-39.

McDaniels then came up with a big block in the post on the defensive end, and Rod Hall‘s three-point play on the other end restored the Clemson lead to six, 45-39.

A layup by McDaniels stretched the lead back to eight, and McDaniels’ soaring alley-oop from Hall stretch the edge back to double digits for the first time in the second half, 50-40, with 10:00 left.

“As a leader, I have to go out there and just be aggressive,” McDaniels said. “As soon as they cut it to one, I had to find a way to take some contact, get to the rim and get the crowd into it, most importantly.”

McDaniels had the first double-double of his career with 21 points and 10 rebounds. He also added seven blocks and helped fuel the second-half surge with a series of his signature highlight-reel plays that helped the Tigers pull away.

“K.J. was terrific and the best player on the floor and probably the biggest difference in the game,” Brownell said.

Foul shooting – something that has been a longtime nemesis for the Tiger program – was also one of the keys to victory Sunday, as they went 24-of-26 at the charity stripe (92.3 percent), outscoring their rivals by 14 points from the line, which of course was the final margin of victory.

“We do a lot of extra shooting, and the extra shooting is really paying off,” McDaniels said. “We’re just going to keep doing that and keep staying focused this year.”

Clemson opened its early lead by forcing the Gamecocks into poor shots in the first half. USC had an 0-for-13 stretch at one point and went nearly seven minutes without scoring, as it began the game 6-for-28 from the field (21 percent) and 0-for-4 on three-pointers.

“We just wanted to come out and hit them first before they hit us, so we didn’t get backed into a corner,” Hall said.

But with center Landry Nnoko in foul trouble much of the second half, Clemson got a much-needed boost in terms of depth from some of its inexperienced big men.

Ibrahim Djambo, Josh Smith and Sidy Djitte all played significant minutes in the post for the Tigers and helped them weather the storm against an imposing South Carolina front line that pulled down 21 offensive rebounds in the game.

“Coach Brownell told us before the game, ‘You never know when your number will be called,'” sophomore guard Jordan Roper said. “And it showed in tonight’s game. Their numbers were called, and they stepped up. It’s great for them confidence-wise, and it’s great for us.”

Roper himself was another example of the Tigers flexing their muscles in terms of depth.

After starting the first two games of the season, Roper came off the bench behind Damarcus Harrison on Sunday. After checking in less than six minutes into the action, he scored 15 points and had five rebounds and four assists.

“Last game it was Damarcus; this game it was me,” he said. “Guys can’t play 40 minutes a game because it’s really taxing. So, just being able to go out there and have someone behind you is really great. I think it’s the strength of our team.”

Clemson (3-0) now turns its attention to tournament play in the Charleston Classic, where it will open action at 8 p.m. Thursday against Temple. The Tigers will also play games Friday and Sunday with the times and opponents to be determined.

Roper said he believed the win over the Gamecocks would give the team a boost in confidence going into the tournament.

“Especially with how big the game was, rivalry-wise, and just playing against a solid basketball team,” he said. “They went to Baylor and played them pretty close, and that’s a top-25 team. So it’ll definitely help our confidence going into the tournament, knowing that we can play with a high-level team.”