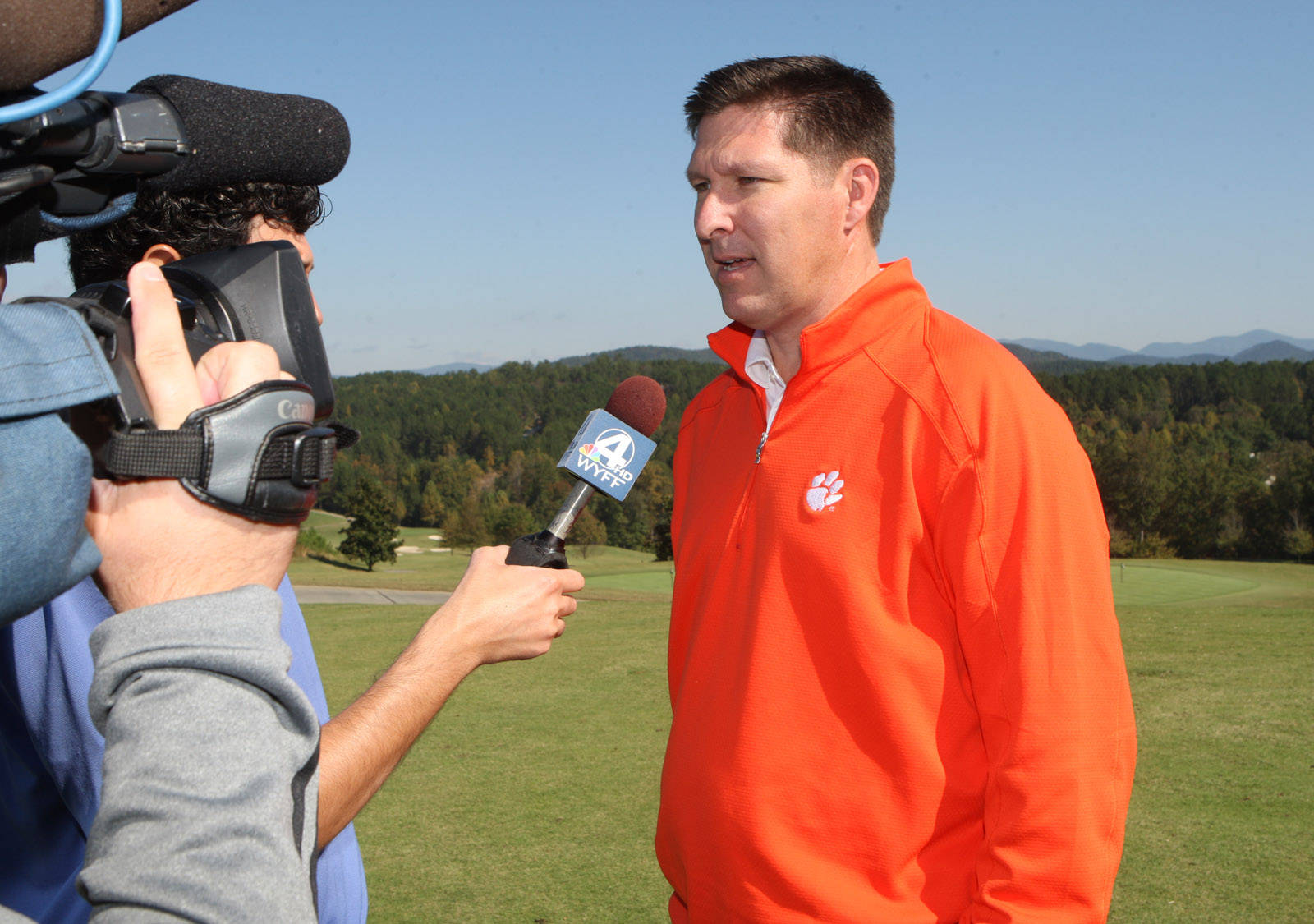 SUNSET, SC — Another new season, the same old questions about how Brad Brownell plans to replace his two best players.  It’s become a familiar refrain for Clemson’s head basketball coach during his tenure with the Tigers — and he knows he’ll be facing them again next year. Brownell had to replace seniors Demontez Stitt and Jerai Grant after his first season produced Clemson’s first NCAA Tournament win since 1997. This season, the Tigers face life without the senior backcourt tandem of Andre Young and Tanner Smith, the team’s two leading scorers a year ago. With a roster featuring 12 underclassmen — including six newcomers — Brownell knows the Tigers’ fortunes will rely heavily on the senior post duo of Devin Booker and Milton Jennings, and says he’s excited to see them step into leading roles. “I do think our younger guys are very eager and excited and have a lot of enthusiasm for the year,” Brownell said Wednesday during his media golf outing at The Reserve at Lake Keowee. “And I’m really hopeful and optimistic that our older guys are going to have big seasons. Milton and Devin have certainly paid their dues, and now it’s their turn to be the primary focus of the team.” But while he has a team that is clearly short on veteran leadership, at least in terms of sheer numbers, Brownell says he’s more worried about something else that the Tigers are short on — proven scorers. Booker is the only returning player who averaged double figures last season at 10.5 points per game, and after Jennings (9.7), the next-highest average from a returnee is sophomore wing K.J. McDaniels at 3.9 points per game. “It’s been the case in my tenure here that we’re starting over a little bit with scoring, and it’s not going to be any different this year,” Brownell said. “It’s going to be a little different in nature in that my first year we had a perimeter player and a post player, and we had really good balance in that Jerai emerged out of that situation. “Last year, we had Andre and Tanner who were our two most experienced and confident players. And this year, it’s two post players.” But those two post players obviously need complementary players if the Tigers are to be successful this season. At the point guard spot, sophomore Rod Hall and freshmen Adonis Filer and Jordan Roper will battle for the starting job, with each bringing something different to the table. Hall is the most experienced, while Filer is perhaps the best defender and Roper the best scorer. “I think it will be a little bit by committee in terms of the point guard spot,” Brownell said. “Really, all three guys will play at times. In the short time that we’ve been together so far, I don’t know that any of them has emerged head and shoulders above the rest.” Brownell indicated the Tigers are likely to rely on a lineup featuring three backcourt players, and the other two starting spots look set to be filled by sophomores T.J. Sapp and McDaniels at shooting guard and small forward, respectively. “Both guys got some good experience as freshmen,” Brownell said. “T.J. started out really well and really understood what we were trying to do much faster than the other freshmen and shot the ball pretty well early on, but probably wore down as the year wore on and didn’t play quite as well at the end. “I think K.J., on the other hand, was just the opposite. He took a while to try to figure some things out and really understand what we were trying to do basketball-wise. Physically, he’s going to be as talented as anybody we’ll recruit. So, I think those two guys are a little further along than maybe the others.” Still, there’s no doubt that the Tigers’ success this season is reliant on the ability of Booker and Jennings to take their games to the next level. Booker is the team’s top returning scorer, rebounder (7.0), assist maker (39), shot blocker (29) and steal producer (27), while Brownell says Jennings is among the best shooters in the Atlantic Coast Conference among big men. “Devin and Milt have really had to wait their turn at times,” he said. “They have gone through the full gamut of not starting, to being reserves, to finally getting to start, to being productive players. Maybe they haven’t been quite as consistent as we would all like, but I feel good about where they are. “I know they’ve had really good summers and a good start to the fall, and I know how excited they are about their senior seasons. I hope it really goes well for them.”