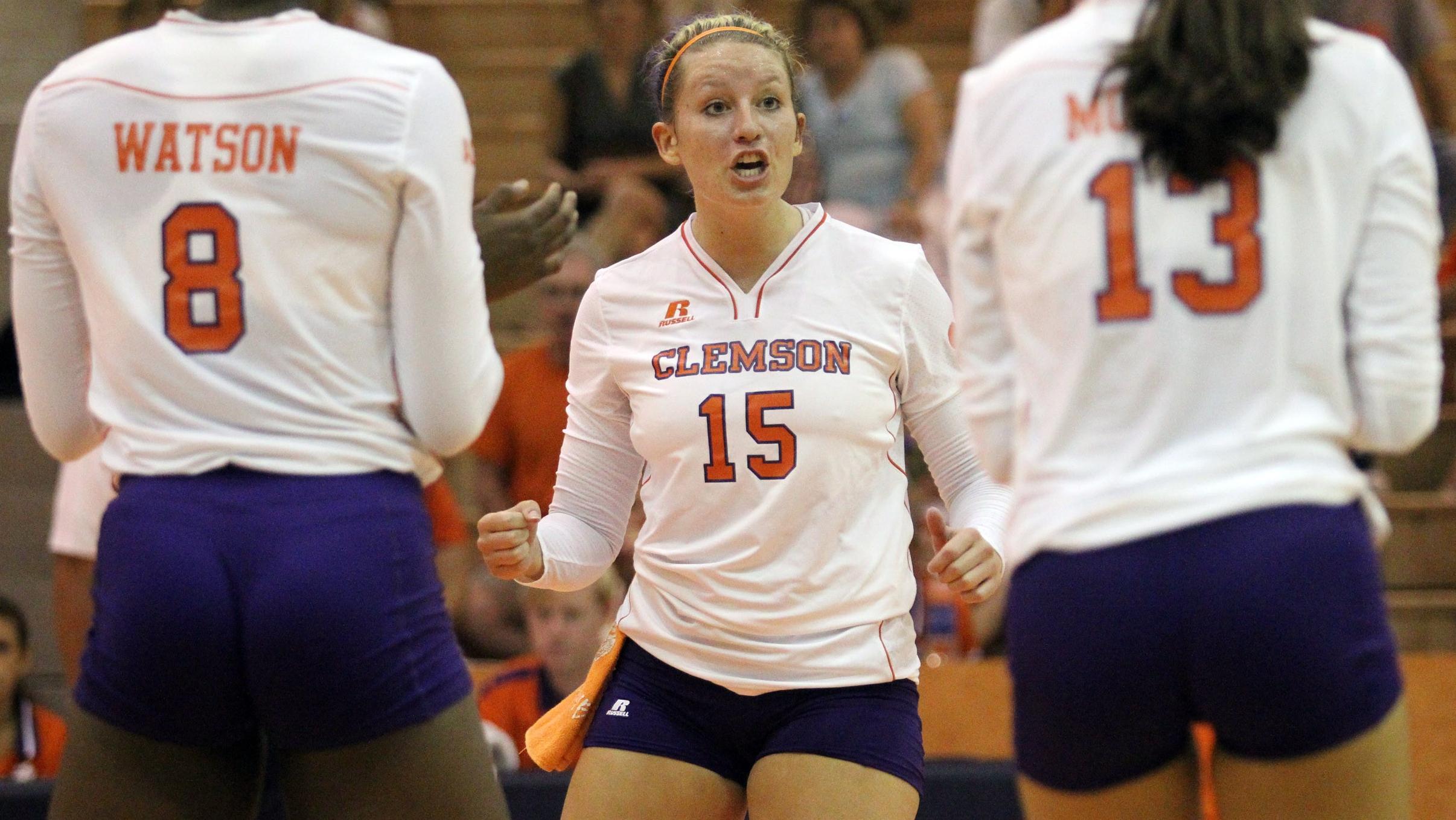 CLEMSON, S.C. — Jolene Hoover split up seniors Hannah Brenner and Mo Simmons for Friday’s annual Orange and White Scrimmage in an effort to balance the sides. But it wasn’t their status as the Clemson volleyball team’s only two seniors that led to the decision. Instead, the commonality between Brenner and Simmons that their coach wanted on both sides of her intrasquad exhibition was fiery competitiveness. Hoover insists the decision to split up the duo wasn’t even a conscious one, though the fact she’s done it four years in a row now made that a tough sell to the players. “I haven’t really, necessarily, consciously done that, but when you’re trying to even teams out and split them up, you split up energy too or try to balance that,” Hoover said. “So they gave me a hard time when I told them the two teams because I guess this is the fourth year in a row they haven’t played together.” The point that anecdote illustrates is that even though Clemson will be a drastically different team than the one that took the court a year ago — with four starters lost to graduation, including four-time All-ACC selection Sandra Adeleye — the Tigers certainly won’t be lost for leadership, and definitely not of the vocal variety. “Hannah and I were the vocal leaders when they were here,” Simmons said, “and so when they’re gone it’s just like nothing changed but our starting lineup. Of course, we keep that fire going, and no matter who’s on the court, her or I, it’s going to be loud and the energy’s going to be there.” That much was plenty evident to those watching the scrimmage, which turned into a hotly contested affair, as Simmons’ Orange squad captured the first set 25-20 before Brenner’s White team took the second set by the same margin and jumped out to an early lead in the third. The Orange ultimately won 15-12 in a third set that featured three tied scores and one lead change. “There was a lot of competitiveness, a lot of spirit and a lot of learning how to work together,” Hoover said. “Especially having so many new people, I think there were some nerves at the beginning. It’s always nice to play this. It’s kind of like a trial run, and then they get some of that out instead of it happening in the very first match.” Clemson has nine newcomers on its 16-player roster, seven freshmen and two junior transfers — defensive specialist Niki Collier from Manhattan Beach, Calif., and 6-foot-4 middle hitter Beta Dumancic from Croatia. “It was key that Beta and Niki Collier came at (the start of the spring semester), so they’ve been here since January,” Hoover said. Returning 6-foot-2 junior Karis Watson appears set to fill the other middle blocker role, and 6-foot freshman Leah Perri from Richland, Mich., looks the favorite to fill the final starting spot on the outside opposite Simmons. In Friday’s scrimmage, Simmons led the way with 15 kills for the Orange team, while Watson led the way with 13 kills for the White. Watson has bided her time at middle blocker behind multi-year starters Adeleye and Alexa Rand. With those two having departed, Simmons said Watson has made the most of the opportunity to fill that void, citing her as one of the players who would take on a significantly increased role this season. “We’ve already had Karis out there, but that girl is on fire,” Simmons said. “I’m just ready to be on that front line with her. And then we have Leah, she’s one of our freshmen and she’s coming in either playing middle or right, and whatever she does, she just kills that ball. She’s on top of her game. So those are our two to look out for.” Clemson finished 21-10 overall last season and 12-8 in ACC play, which left it in a tie for fourth in the conference and just on the outside looking in for the NCAA tourney. Hoover said she made a conscious decision to schedule tougher out-of-conference opponents this season in order to strengthen her team’s RPI and, in turn, its hopes for postseason play. “Obviously you’ve got to win the ones you should win, but hopefully our RPI will be a little better by the end of the year and we’ll be able to get in,” she said. As mentioned, the Tigers lose plenty off last year’s squad, including their leaders in kills per set (Adeleye), blocks per set (Rand) and digs per set (Natalie Patzin), as well as former All-ACC performer Serenat Yaz, while veteran outside hitter Kristin Faust is back, but recovering from an ACL injury. Still, Simmons believes the Tigers can improve upon last season’s finish with herself — she ranked seventh in the conference in kills per set (3.17) — and Brenner, who led the team and was fourth in the ACC in assists per set (10.04), leading the way. “In my head, we’re going to be better; we’re already better, or starting out better,” Simmons said. “Me and Hannah told the team, ‘We’re ready to lead this team to the ACC, if y’all are ready to follow.’ And they were like, ‘Mo, we’re ready to follow.’ So, they’re on board, and we’re already a step ahead of what we were last year.”