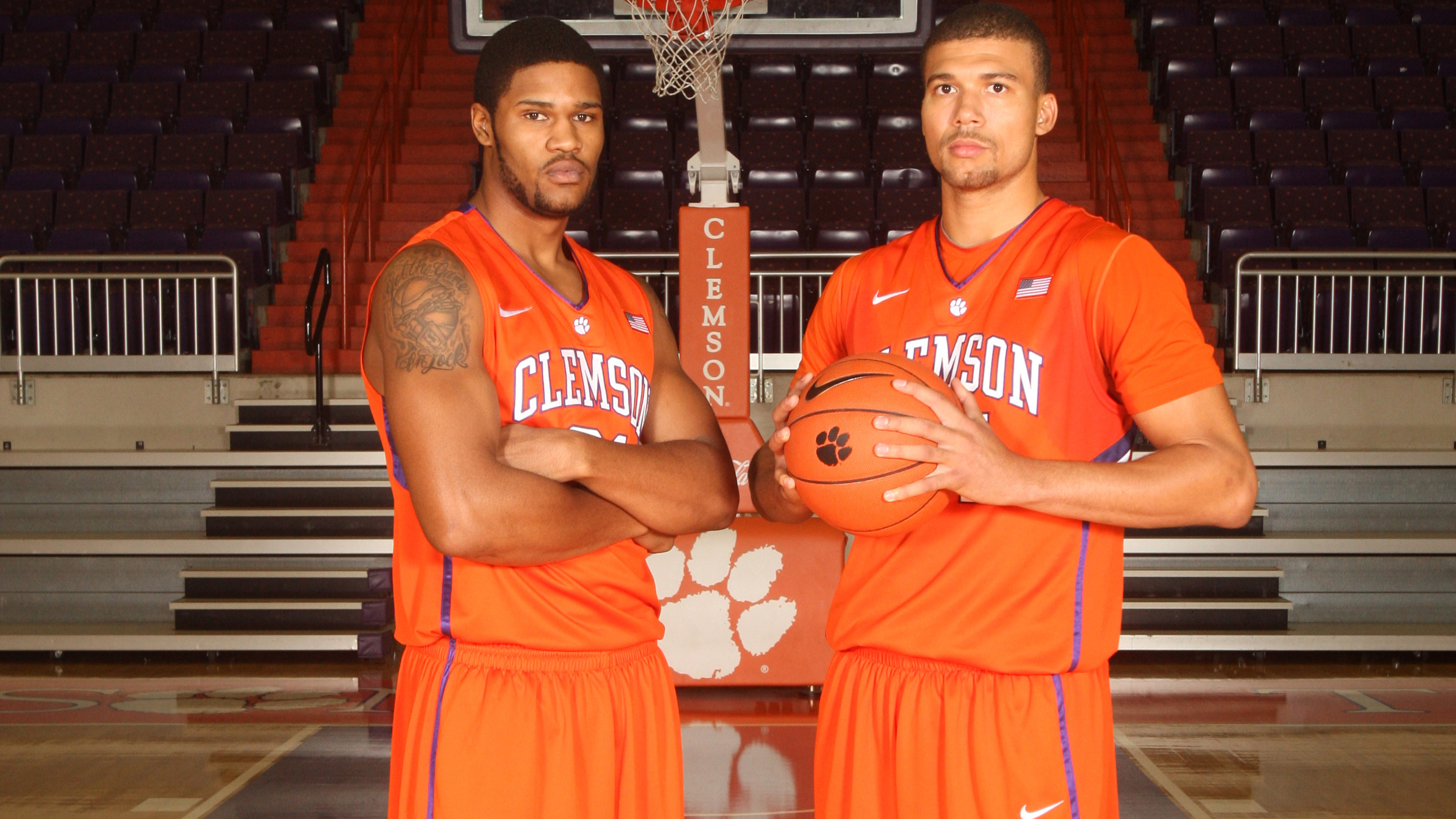 CLEMSON, SC – Devin Booker and Milton Jennings were in agreement they wouldn’t get overly emotional when they take the Littlejohn Coliseum court for a final time Tuesday, but Booker is fairly certain the same can’t be said for his mother, Tracey.”My mom talked about that on the phone the other day,” Booker said in reference to his Senior Night game against Boston College. “She said she is definitely going to be one shedding tears in the stands.”It is not just any Senior Night for the Booker family, as Tuesday will mark the 225th time in the last 228 games a Booker has been in the starting lineup for the Tigers. Devin’s older brother, Trevor, started 134 straight games from 2006-10, and Devin has started all but three games over the last three seasons.The Bookers are the fourth highest-scoring brother combination in ACC history with 2,838 points.”That’s something we have been working for ever since we were younger as kids, just growing up playing basketball down the street against each other,” Devin said. “And all of that has paid off in the long run. We made a name here at Clemson, and we just tried to do what we can to make Clemson proud.”But as much as being Trevor’s younger brother has made Devin a legacy, it has also forced him to live up to the extremely lofty expectations set by the only first-round NBA draft pick from Clemson since 1994.”I actually didn’t figure that out until I got here,” Devin said with a laugh about those high expectations. “That’s when it hit me.”The only other senior on the Tigers’ team, forward Milton Jennings, can relate to his classmate when it comes to dealing with high expectations.As the highest-rated recruit to enter the program in 15 years when he arrived as a freshman in 2009, Jennings has steadily improved his stats each season in a Clemson uniform, but admits he’s had an “average career” -when held to the standards of being a five-star recruit.”Devin is compared to his brother the whole time, and Milt is compared to whatever you think a five-star guy is supposed to be, so they’ve both had to deal with some difficult expectations throughout their career, to be honest,” Tiger Head Coach Brad Brownell said. “Ironically, if both kids didn’t have those things, a lot of people would think that those guys had better careers then, but because of those things it seems like there are people that are disappointed in those guys sometimes.”The game with Boston College (7 PM, RSN) also marks the end of an era in another respect: Booker and Jennings are the last two remaining holdovers on the Clemson roster from the era before Brad Brownell took over as the Tigers’ head coach.”We laugh about it all the time,” Jennings said. “Because you just look around and everybody’s different. There’s a few of the same people around, but we have a different trainer, different strength coach, an entirely different coaching staff, different teammates. It’s been a great experience, and it helped me as a person. It’s been a process, it’s been fun, and I hope I get to come back and laugh with the guys and see how they’re doing next year.”And while their senior season hasn’t played out as well as they might have liked – Clemson enters the final two games of the regular season at 13-15 overall and 5-11 in ACC play – both Booker and Jennings say they wouldn’t trade the experience for anything.”I’m going to be the first to graduate college in my family,” Jennings said. “I didn’t know anybody until I got older that even went to college. That alone beats everything. And of course I got to play basketball. Most kids don’t get to do it; there’s very few. I’m very proud to be a Clemson Tiger, I know that much.”And while neither will admit to being overly emotional about their final home game as Tigers just yet, neither is willing to say they won’t be come Tuesday night.”Milt and I haven’t really talked about it, but I’m pretty sure he’s been thinking about it and so have I,” Booker said, his gaze drifting into the distance as he ponders the thought. “It’s going to be a crazy experience tomorrow.”