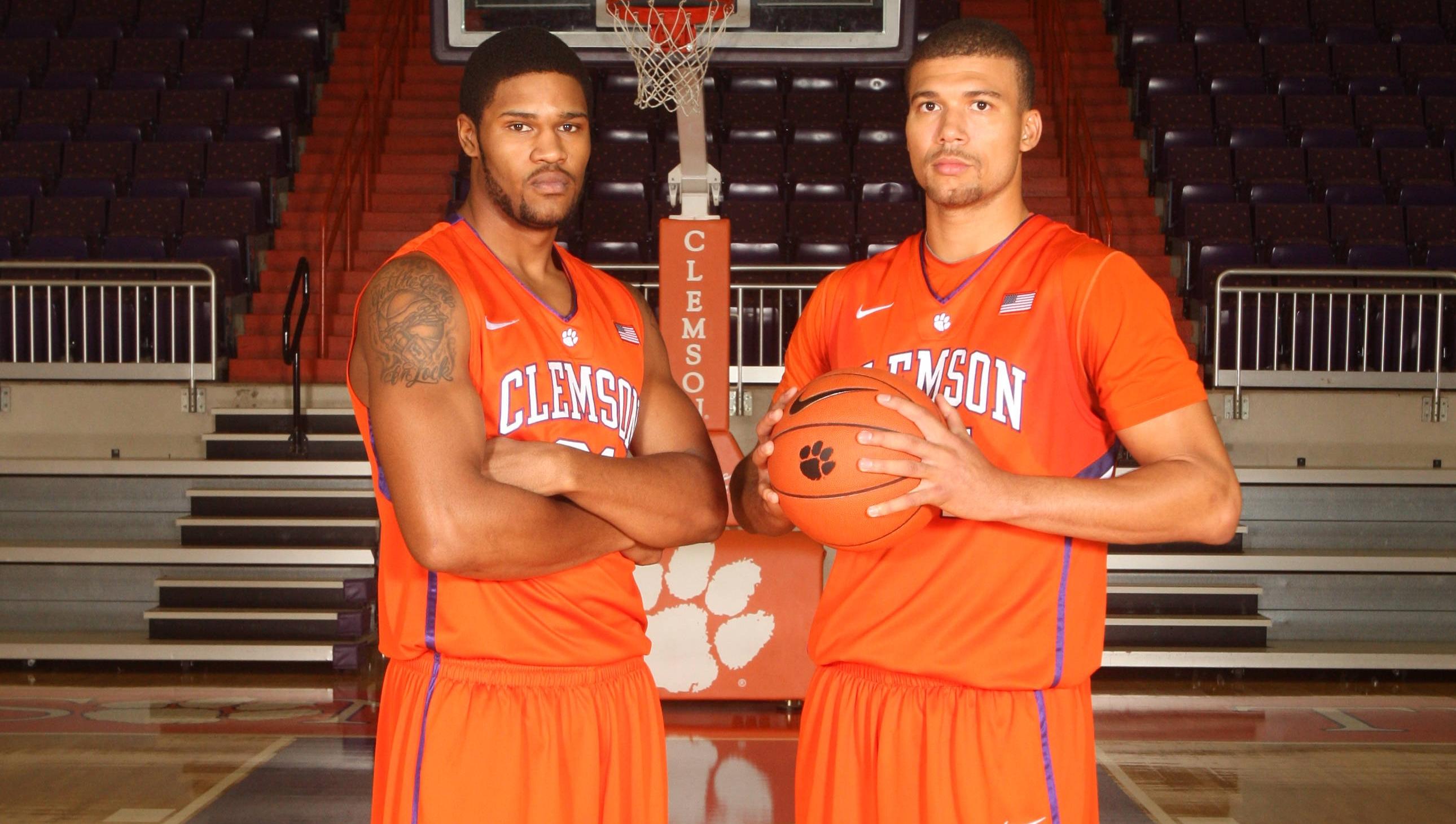 CHARLOTTE, NC — Devin Booker has plenty of experience being part of a low-post tandem. He and brother Darrion used to team up to keep big brother Trevor from dominating pickup games when they were growing up. “Darrion and I would usually be on the same team just so we could try to stop Trevor,” Devin said with a laugh at ACC Operation Basketball on Wednesday at Charlotte’s Ritz-Carlton. “But that really never happened.” While Devin took his share of lumps during his formative years trying to guard Trevor, the future Clemson standout and eventual first-round pick of the NBA’s Washington Wizards, he says those lessons have served him well as he’s taken his game to the next level, now as a senior big man for the Tigers. “That’s what got me stronger, just to tell you the truth, watching him and seeing how he worked, and just seeing that I had to be stronger in order to guard him,” Booker said. “It worked out for the best.” Nowadays, Devin is part of a different tandem in the low post, as he and fellow frontcourt player Milton Jennings are the only two seniors and, in fact, only two upperclassmen on the Clemson team, which opened practice last Friday. They are also the only two players on the roster with NCAA Tournament experience other than BYU transfer Damarcus Harrison, who played in the Big Dance for the Cougars last season. Booker is the Tigers’ leading returning scorer (10.5 points per game) and rebounder (7.0), and Jennings averaged 9.7 points per game last season. “Our strength is probably our post game,” Booker said of Clemson’s team makeup. “I’m going to be a threat in the post. And Milt has the outside game to go along with that. it’s going to be hard for post guys to defend both of us.  “Plus, we have energetic guards that love to make plays and do certain things to get us open. Once you put that all together, we should have a pretty good team.” Clemson finished 16-15 overall and 8-8 in ACC play a year ago, but missed the NCAA Tournament for the first time in the two seniors’ collective careers, a fact that both admitted did not sit well with them in the offseason. The Tigers were picked to finish eighth in the league by both the ACC head coaches and the media. But even with a roster featuring 12 underclassmen — six of them newcomers — Jennings feels they are going to surprise some people this season. “We believe we have one of the best frontcourts in the conference,” Jennings said. “I can pull another big man out and take him to the hole or go inside, and Book can take his man outside or he can go inside. We hope it’s going to be a mismatch problem for most of the teams in our league.” Beyond the senior duo, however, the Tigers have very little experience in the post. The only other two true bigs are freshmen Landry Nnoko and Josh Smith, while sophomore Bernard Sullivan has played in the post, but is undersized at 6-foot-7 and averaged just 7.5 minutes in 28 appearances last season. Still, Clemson Head Coach Brad Brownell believes his team has a strong presence in the post that it can rely on in Booker and Jennings, and believes the two veterans complement each other very well. “They do, very much,” Brownell said. “Milt’s ability to shoot the ball stretches the defense. Certainly, Devin is much more physical and willing to do some of the heavy lifting – post defense and defensive rebounding – a little bit better than Milt. They both have a good feel for passing to each other in high-low sets.  “There’s a great feel there. I think there’s very good camaraderie between the two. They came in together. They’ve grown through the program — very similar paths, very similar success. I think there’s a good respect factor there. Their games do complement each other.” As for Booker, he says it’s been quite some time since he played in one of those pickup games with Trevor. He did visit his big brother in Washington, D.C. recently, and says he was able to pick up a few quick tips on low-post play on his trip. “We actually got a good workout in,” Devin said. “That caused us to play one-on-one in the post just to make each other better. It was just he and I in the gym, and it was very hard guarding him. I tried to make it hard for him to guard me, but both of us did pretty well.” Booker says working on his post-up game is something he’s done a great deal of this offseason, as he’s admittedly well aware that this season is his last chance to follow in his brother’s footsteps in terms of greatness in a Tiger uniform. “I’ve been working on my face-up jumpers and different things I can do out of the face-up series, so that I’m not just a back-to-the-basket type of guy,” he said. “I’ve been working on different things to go along with my post moves. You’ll see a variety of things this season.” Clemson is certainly hoping so, as there’s a clear need for both Booker and Jennings to have standout senior seasons. While some might view that as extra pressure, Booker said that he and his fellow senior look at it as a challenge to embrace. “I’m looking forward to it just because I know I have a young team to go to war with,” Booker said. “It’s a little bit of pressure on me, but I also have a little help with Milt. So I’m looking forward to it. We’re capable of doing really good things this season.” 2012 ACC Preseason Media Poll 1. NC State 2. Duke 3. North Carolina 4. Florida State 5. Miami 6. Maryland 7. Virginia 8. Clemson 9. Georgia Tech 10. Virginia Tech 11. Wake Forest 12. Boston College