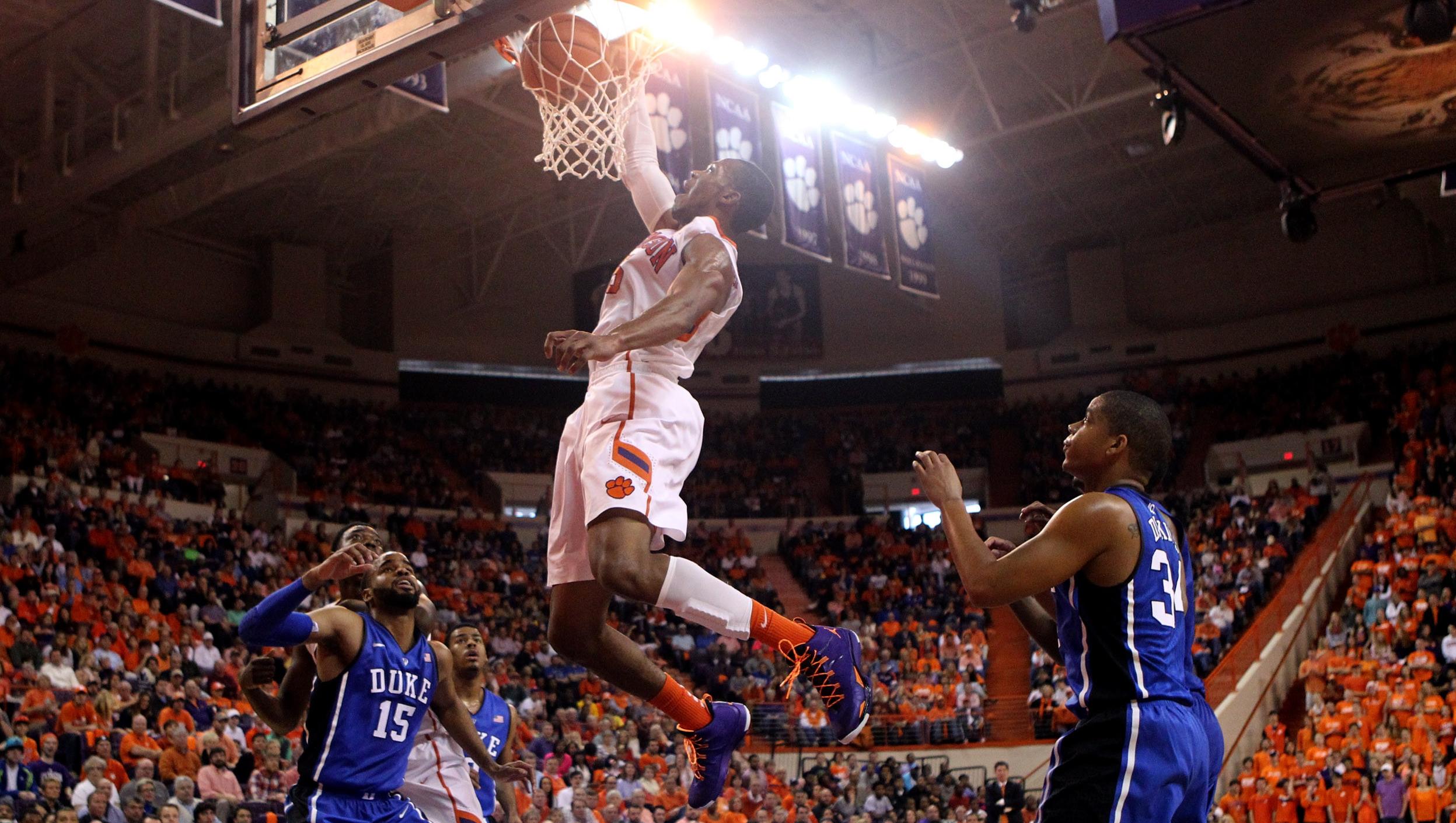 EXCLUSIVE: Blossomgame Makes Most of Matchup with Duke Superstar

CLEMSON, SC – Jaron Blossomgame had heard over and over ahead of Saturday’s Duke game that he didn’t stand a chance of stopping Blue Devil freshman sensation Jabari Parker.

Turns out, the same could have been said to Parker.

The Clemson red-shirt freshman did that to the tune of 14 points and 14 rebounds to notch his first career double-double while matched up head-to-head much of the night against Parker, whom many have tabbed as the likely top pick in this year’s NBA Draft.

The 14 points and 14 rebounds were both career highs for Blossomgame, who had never reached double figures in either regard previously as a Tiger.

When it was over, legendary Duke coach Mike Krzyzewski singled out Blossomgame – not his own freshman star – as the player who provided the crucial plays in the Tigers’ 72-59 win over his Blue Devils.

“Blossomgame had an amazing game,” Krzyzewski said. “He had 14 and 14, and he hit two big three-point shots that turned the tide definitely in their favor.”

The 13th-ranked Blue Devils (12-4, 1-2 ACC) led by as many as 10 in the first half, thanks in large part to 10 early points by Parker, but Blossomgame kept Clemson close as he rose up on a rebound for an emphatic one-handed tip slam to pull the Tigers back within five.

Duke still led by nine after Rodney Hood buried a three-pointer just after halftime to make it 40-31, but Clemson went on a 19-9 spurt from there and trailed by only one after Blossomgame made one of two at the line to make it 50-49 with 9:57 left.

Blossomgame hit another big three-pointer a little later, this time from the corner, to make it 57-54 Tigers.

“I was feeling it at that point,” Blossomgame said. “We were only down by a little bit, and we had to make a couple of buckets. I got the ball and had to knock them down.”

After coming into the game 3-for-15 on the season from three-point range, it might have been easy for Blossomgame to pass on those long-distance shots, but he said he never lost confidence they would start falling eventually.

“I’ve been struggling so far, but I feel like I’m getting back into the flow of things,” he said. “Today was a great game, and I want to keep pushing throughout the whole ACC season.”

He also held Parker to 15 points on 5-of-13 shooting, well below his average of 19.8 points per game coming into the contest. After Parker scored 10 points in the first six minutes of action, Blossomgame locked down and held him to just five across the final 34 minutes.

For Clemson (11-4, 2-1), the performance stood in stark contrast to the one it had delivered two days prior, when a sputtering offensive effort led to a 56-41 loss to Florida State at Littlejohn.

But while the Tigers had struggled to score the basketball, Blossomgame said Head Coach Brad Brownell had not been too hard on the team, as he felt they had actually put in a good effort on defense and simply suffered from an ice-cold effort on offense.

“He was trying to rally us,” Blossomgame said. “He didn’t want us to get down on ourselves after a loss like that. We just had to bounce back and come take care of business today.”

Blossomgame arrived at Clemson in 2012 as the highest-rated signee in his class, but he sat out the season and red-shirted due to a broken leg suffered in April as a senior in high school.

When the bone didn’t heal properly and infection set in from the first surgery, he underwent second surgery on his leg last June to accelerate the healing process.

After returning this season and locking down a starting job at power forward – not even his natural position of small forward – Blossomgame had struggled at times to find his game and was averaging just 3.9 points and 3.9 rebounds coming into Saturday.

“He’s gone through a ton in the last 18 months,” Brownell said, “and I’m really happy for him because I know how hard it’s been to rehab and then sit out and have a second surgery when the first doesn’t go well. Then there’s an infection and that sets you back even further. He’s had to overcome a lot, and we’ve done a good job as coaches trying to be patient with him – and that patience paid off today.”