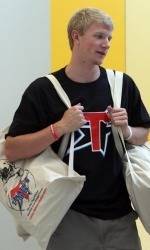 CLEMSON, SC – Clemson senior Tanner Smith and his non-profit organization, Tanner’s Totes, will be featured on a 30-minute television show titled “Everyday Health” on ABC affiliates across the nation this weekend. While the show will air in many television markets, it is not scheduled to be shown in the Clemson area. It is scheduled to be shown at 11:00 AM on Saturday, Oct. 8 in Charleston (WCIV), Columbia (WOLO) and Florence/Myrtle Beach (WPDE) markets throughout the state of South Carolina.

For complete show times and channel listings, fans are asked to visit www.littonweekendadventure.com/everyday-health-tv-schedule. The entire episode will be available on Smith’s website, www.tannerstotes.com, once the show has aired. Additional video footage will be posted on the show’s home page as well, www.everydayhealth.com/tv.

Smith, a senior guard on the men’s basketball team, formed Tanner’s Totes when he was 12 years old with the intent of giving teenagers and pre-teens undergoing long-term illness treatments a reason to smile through the delivery of large tote bags filled with goodie items. The organization has been profiled by the Atlanta Journal-Constitution, CBS, ESPN.com and HGTV since he signed his letter-of-intent with Clemson in the fall of 2007.

ABC and Koops Production crews spent time filming with Smith and his family in his hometown of Alpharetta, GA in August. The crew was on hand for a charity fundraiser at his high school, Wesleyan, where an estimated $6,500 was raised for Tanner’s Totes. NBA players Gani Lawal and Trey Thompkins were also at the event to help raise money. The crew also spent time filming Smith and his parents, Craig and Kathy, delivering tote bags to patients at Children’s Healthcare at Atlanta’s Scottish Rite Hospital.