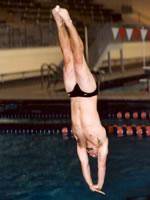 CHARLOTTESVILLE, VA – The Clemson men’s swimming and diving team is currently in fifth place through two days of competition at the 2004 ACC Men’s Swimming and Diving Championships. Eric Shulick won the ACC title in the one-meter diving competition on Thursday to lead the Tigers at the conference meet, which is being held at the UVa Aquatic and Fitness Center on Virginia’s campus.

Virginia is currently leading the competition with 314 points, while Florida State is in second place with 204 points. Georgia Tech and North Carolina are in third and fourth place with 157.50 and 155.50 points, respectively, while the Tigers are in fifth with 148 points. NC State (142), Maryland (114) and Duke (71) are in sixth, seventh and eighth place, respectively, through the first two days of the meet.

Clemson diver Eric Shulick was the ACC Champion in the one-meter diving competition, posting 314.60 points to win the event. Shulick is just the sixth Tiger to claim the conference title in one-meter diving, and the first since Brian Haecker won the event at the 1996 conference meet.

Mark Henly took third place in the 200 IM for Clemson, finishing the event with a time of 1:49.27. Henly recorded a career-fastest time of 1:49.22 during the preliminary round of the event to qualify for Thursday evening’s final. Buddy Reed finished seventh in the championship finals of the 200 IM with a time of 1:51.52. In the consolation finals, Jordan Raynovich finished 17th (1:52.37) and Charlie Dillon was 18th (1:52.56) in the event.

Clemson’s Drew Scheerhorn finished in eighth place in the 50 free with a time of 20.74. Scheerhorn’s preliminary round qualifying time of 20.60 was a career-fastest time in the event for the Tiger. In the 500 free, Brian Regone finished 23rd overall, posting a time of 4:40.56 in the event.

The Tigers’ 200 free relay team of Tommy Rappold, Bryce Herrington, Brent Hitchcock and Scheerhorn finished seventh with a time of 1:22.28. The time was a season-fastest for Clemson.

Competition will resume on Friday, Feb. 27 with the preliminary rounds beginning at 11:00 a.m. and finals commencing at 7:00 p.m.