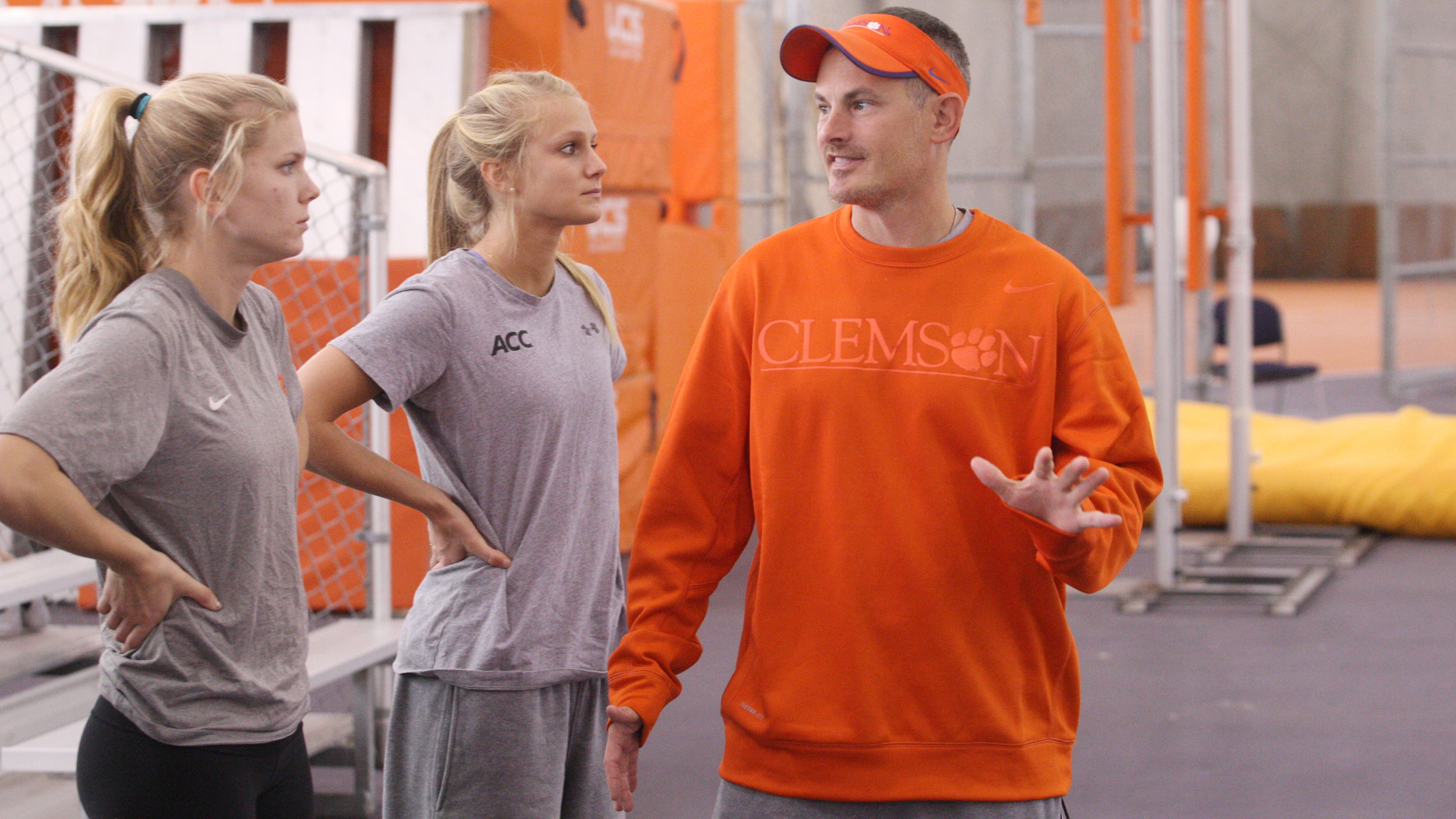 CLEMSON, SC – Head Coach Mark Elliott announced Tuesday he will retain Shawn Cobey, Chris Bostwick and Adrain Mann from the track & field staff. All three were instrumental in helping Clemson to a pair of 2013 ACC Championships on the women’s side, and third-place finishes in both seasons in men’s track & field. Cobey, the interim coach last season, will be the program’s director of operations. Bostwick will be an assistant coach in charge of the jumps, while Mann will assist Elliott and the other coaches during the transitional period.”Shawn was in the interim position,” Elliott said. “I’m lucky to have someone like him to be our director of operations. It makes my transition a lot easier. He can make me look better if things are done smoothly, without any hiccups. That will be attributed to Shawn. In the few weeks I’ve worked with him, I can see why he’s been so successful.”Cobey was the ACC Indoor Women’s Coach of the Year and USTFCCCA Southeast Region Women’s Indoor and Outdoor Coach of the Year in 2013 after leading the Tigers to conference titles in both seasons. The men’s and women’s teams combined to win 17 ACC individual and relay titles in 2013 under his leadership. In addition, the Tigers received 31 first- and second-team USTFCCCA All-America accolades.Cobey’s women’s program was ranked in the top 15 of every USTFCCCA poll in the 2013 season, with a high of No. 1 for three weeks during the indoor campaign. He also guided the men’s team to its best collective effort in a number of years. The Tigers were third at both the ACC Indoor and Outdoor Championships, both program bests since 2008. The indoor men’s team finished in 25th place nationally.

He has been a common denominator on the staff for eight consecutive ACC Championships in women’s track & field. He was an assistant coach in charge of throws over his first three seasons. Cobey coached Brittney Waller to ACC titles in the weight throw in 2011 and 2012, and to a second-team All-America honor in 2011. In 2010, he coached Zach Berg to school records in both the weight throw and hammer throw. Alex Padgett would go on to break Berg’s record in the weight throw as a senior in 2011. His senior season culminated with an ACC Championship in the shot put at the outdoor league meet in Durham, NC. Padgett was also All-ACC in the indoor shot put under Cobey’s tutelage in 2011 as well.

Cobey previously coached at Youngstown State from 2003-09. He was a six-time all-conference thrower and earned two degrees at the school as well.

Bostwick was a member of Clemson’s staff for his first season in 2012-13. He will now be in charge of all jumps for the combined program.

“I’ve been lucky to work with a lot of good coaches at LSU, especially in the jumps,” Elliott said. “Some coaches that I respect said Chris is a very good coach. In talking to some of the athletes and administration, it seems that he has respect across the board. He’ll help me be a better coach by listening to him, because he has experience working with our kids.”

Bostwick was a part of two ACC Championships in women’s track & field in 2013 at Clemson. He coached five All-ACC performers and four NCAA qualifiers in his first year alone. Lauren Terstappen was all-conference in both seasons and made it to the outdoor national meet. She also established the school’s outdoor record with a jump of 13’6.25″ in May.Jameel Abdul-Mateen earned two firsts in 2013, as the sophomore was All-ACC and a second-team All-American in the long jump after adding well over a foot to his personal best (25’6″). Bostwick also coached Mimi Land, the ACC Indoor Freshman of the Year and USA Junior qualifier in three events. She was All-ACC in the indoor long jump and an NCAA outdoor qualifier in the event as well.Bostwick was an assistant coach at Binghamton (2000-02), Miami of Ohio (2002-06) and Michigan State (2006-12) prior to his time at Clemson. He earned a bachelor’s and master’s degree from Cortland State in New York.Mann was an assistant coach who helped the Tiger sprints, hurdles and relays to outstanding achievements in 2013. The groups combined to 11 individual ACC titles in his first season. He helped coach Brianna Rollins to a pair of NCAA Championships and collegiate records in the high hurdles. On the men’s side, he also helped coach Spencer Adams to a pair of ACC titles and bronze medals at the NCAA Championships in the hurdles.”I am very familiar with Coach Mann,” Elliott said. “He volunteered at LSU prior to being employed here at Clemson. He is a hard worker and a good coach. He has the knowledge base to help our student-athletes across the board.”Mann served as a volunteer assistant under LSU’s Dennis Shaver from 2007-12. During this stretch, LSU won a pair of NCAA Championships in women’s track & field. In five indoor and outdoor seasons with Mann as a volunteer, the SEC Tigers finished no worse than sixth at an NCAA national meet. He was a five-time All-American hurdler at the University of Florida from 1996-2000. He earned a bachelor’s degree in computer science from Florida in 2001.