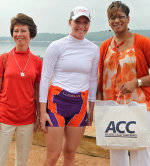 Sarah Egan, a sophomore on the rowing team, led the program at Central Elementary School this year. Egan scheduled Clemson student-athletes to read to children in the fourth and fifth grade classes at Central Elementary each week. Throughout the year, there were six student-athletes who regularly helped out and developed relationships with the classes.

According to Egan, “the kids were all very excited every time a reader came in, and even asked if we were doing T.I.G.E.R! Read with them again next year!”

Because of the relationship Clemson Athletics has developed with Central Elementary, the school was the beneficiary of the ACC Connections partnership. All of the books for the program were donated to the classes from the Atlantic Coast Conference. Central Elementary Principal, Idasa Cobb, and reading specialist, Deegie McGill, were honored at the 2012 ACC Rowing Championships last Saturday, April 21.

Next year, Egan will continue to lead the program, but will be working with students at Blue Ridge Elementary School. “I enjoyed being a part of T.I.G.E.R! Read this year, and can’t wait to make the program event better next year!” said Egan.

As with all of the Be a T.I.G.E.R! components, the student-athletes are always thinking of new and creative ways to relate to the children. Each year the program is able to accomplish bigger and better things.