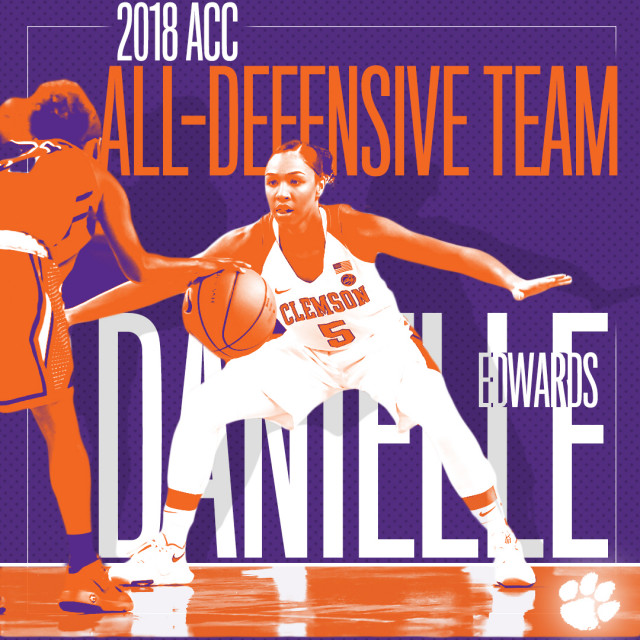 CLEMSON, S.C. – Junior Danielle Edwards has been named to the 2018 ACC All-Defensive Team, as voted on by the league’s 15 head coaches and announced by the conference office on Tuesday afternoon. The guard from Perry Hall, Md. has amassed 77 steals on the season, a figure that ranks second in the ACC and 27th in the nation, and her 2.7 steals per game figure is third in the conference and 36th nationally.

Edwards has played a significant role in the Clemson team’s success on defense in 2017-18, helping the team to a three-point field goal percentage defense (28.3%) that ranks first in the ACC and 27th in the nation. As a team, the Tigers are fifth in the league in scoring defense (60.3), and also rank in the top half of the conference in steals, steals per game and turnovers forced per game.

In a win over South Carolina State on Nov. 13, Edwards recorded nine steals, tying the Clemson record for steals in a single game, a mark that had been achieved four times previously by a Tiger player, however not in more than 30 years, since the 1986-87 season. The nine steals in a game are the most in a single game by any ACC player this season.

Edwards has started all 29 games for the Tigers in 2017-18, and has started all 90 games of her three-year Clemson career thus far. She has 205 career steals, as well as 832 career points and 224 career assists. She ranks second on the Tiger team in scoring, averaging 9.3 points per game, and in addition to her steals numbers, also leads the team in assists (65) and minutes played per game (31.1).

She is only the fourth player in Clemson history to earn ACC All-Defensive Team accolades, joining Erin Batth, Chrissy Floyd and Lele Hardy. Batth earned the honor twice, in 2000 and 2001, Floyd did so in 2002 and Hardy was a two-time selection in 2009 and 2010.