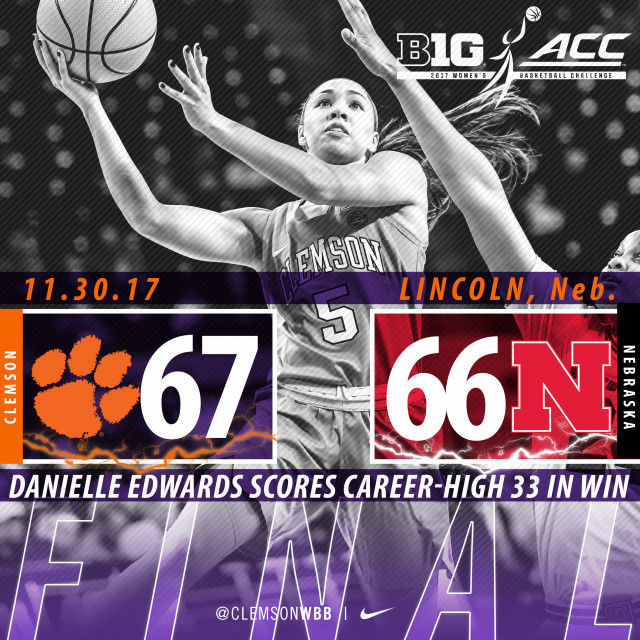 LINCOLN, Neb. – Junior point guard Danielle Edwards had the game of her three-year Clemson career thus far, scoring 33 points to lead the Tiger women’s basketball team to a 67-66 victory at Nebraska on Thursday in Lincoln, Neb. With the win, which came in a very difficult environment in front of more than 3,500 fans at the Pinnacle Bank Arena, Clemson improves to 5-2 in the season, while the Cornhuskers dropped to 4-3 with the loss.

Edwards’ 33 points, which came in 33 minutes of action, were scored on a 9-for-15 performance (60%) from field goal range, which included 5-for-9 (55.6%) from behind the arc. The native of Perry Hall, Md. was also a perfect 10-for-10 from the free throw line. It was only the eighth time in program history that a Clemson player shot 100% from the free throw line in a single game, when making 10 or more free throws.

Edwards scored 49.3% of the Tigers’ points in the game, a figure that is tied for sixth in school history for highest scoring percentage of the team’s total points. Edwards is tied in that category with teammate Nelly Perry, who scored 33 points out of the team’s 67 against Boston College of Feb. 18, 2016.

Nebraska shot well in the first half, making 50% of its field goals (13-for-26), and was even better from three-point range at 60% (6-for-10). Despite those numbers, the Tigers led 42-38 at halftime, thanks in large part to Edwards’ 21 first-half points. In the second half, the Clemson defense locked down on the three-point shot, holding the Cornhuskers to just two made three-pointers in the half.

The Tiger team had 12 steals in the contest, including the five by Collier and four by Edwards. They forced 26 Nebraska turnovers, which led to a 28-13 advantage in points off turnovers. In addition to Edwards’ perfect performance from the free throw line, the rest of the Tigers combined to shoot 12-for-15 from the charity stripe, and, as a whole, the team shot 22-for-25 for 88.0%, another key statistic in the game.

The Tigers are in the midst of a stretch of three games in five days. They host Charleston Southern on Saturday, Dec. 2 at 2 p.m. at Littlejohn Coliseum, before heading to Ruston, La. to face Louisiana Tech on the road at 6:30 p.m. CT (7:30 p.m. ET) on Monday, Dec. 4.