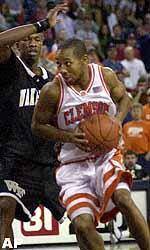 Clemson, SC – Edward Scott was named Clemson’s team MVP for 2001-02 at the team awards banquet held Sunday night at the Madren Center on the Clemson University campus. Scott was one of six different players who were presented awards Sunday.

Scott won the Paul Bowie Award as the team’s MVP and the Florence County Clemson Club Award for the most assists. The junior from Columbia who served as Clemson’s team captain this year averaged 7.93 assists per game to rank third in the nation in that category. He had 238 overall, second highest total in Clemson history. He established a Clemson record for assists per game and the the #3 national ranking was the highest in any statistical category by a Clemson player since 1992-93 when Sharone Wright was second in the nation in blocked shots.

Scott also averaged 11.9 points per game, third best on the club, and 4.9 rebounds per game, most by a Clemson point guard since the 1959-60 season. Scott had 30 points and 16 assists in Clemson’s win over Wake Forest this year, just the second time in ACC history that a player had at least 30 points and at least 15 assists in the same game.

Senior Jamar McKnight captured two awards at the banquet on Sunday. McKnight won the Tom Lynch Award as the team’s most improved player, and the Greenwood County Clemson Club Award as the best free throw shooter. McKnight averaged a team best 12.5 points per game. He improved his scoring average by 9.1 points a game over last year, the seventh best one-season improvement in Clemson history. He made 75 percent of his free throws, including 79.5 percent in ACC games.

Freshman Sharrod Ford won the Greater Columbia Clemson Club Award as the top field goal percentage shooter. The reserve center shot 60.6 percent from the field, a Clemson record for a freshman. He finished the year with a double-double in the ACC Tournament against Florida State, the first Clemson freshman to record a double-double in the ACC Tournament in seven years. He ranked in the top 15 in the ACC in blocked shots this past season.

Coach Larry Shyatt also presented four special awards to people who have had a strong impact on the program off the court. Pat Holder won the Bob Bradley Coaches Award, Chris Craven represented Central Spirit which won the Jim Phillips Coaches Award, and Cliff Bowman won the Dr. R.C. Edwards Fan Award. Coach Shyatt also presented a Special Appreciation Award to the Robert Balliet, the mother of Andy Balliet, a strong supporter of the program, who died of a brain tumor this past season.