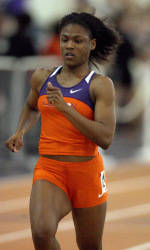 CLEMSON, SC – Tiger junior Jasmine Edgerson led the track & field program’s efforts Friday at the Clemson Invitational, the school’s second home meet of the indoor season. Edgerson won the 60 dash and established a season-best in the event, while Marcus Maxey of the men’s team was runner-up against a strong field in the men’s high hurdles.

Edgerson ran away with the individual title in the 60-meter dash. She coasted to a season-best time of 7.37 in the prelims and followed up with a consistent 7.38 in the final. Clemson did not compete its top two student-athletes in the event in Stormy Kendrick and Dezerea Bryant.

Marcus Maxey was runner-up in the men’s 60-meter hurdles. The ever-improving junior out of Athens, GA recorded a time of 7.82 – a personal best and the eighth-best time in Clemson history for the event. Also in the hurdles final, Charlton Rolle was fifth place with a time of 8.03, after an 8.01 in the preliminary round.

Keni Harrison was impressive in the women’s 60 hurdles final. The freshman from Clayton, NC had her best performance of the season. She clocked an 8.20, tied for fourth in the Clemson record books with Nikkie Bouyer. Harrison placed fourth against a strong field, one spot ahead of Edgerson who ran a solid 8.31.

Sonni Austin was third place in the women’s 400-meter dash. The junior out of the Atlanta area clocked a time of 56.41. On the men’s side, Jaron Roberson won the quarter mile with a time of 49.81.

C.J. Davidson was the third-place finisher and led a quartet of Tigers with a mark of 23’8.75″.

The Tigers return to action Saturday to conclude the Clemson Invitational, starting with field events at 12:00 PM.