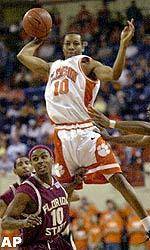 Scott scored 36 points, had eight rebounds and seven assists in Clemson’s 87-78 win over Florida State. He hit 12-15 shots from the field, including 5-6 on three-point shots and 7-8 from the foul line. He made 5-6 free throws inside the last five minutes of the game to hold off the Seminoles. Scott’s 36 points were the most by a Clemson point guard in 32 years. Butch Zatezalo had 43 points against NC State on Valentine’s Day, 1970. Against Maryland, he had 11 points, eight rebounds and five assists.

Against NC State, Akins scored 17 of his 19 points rallying the Yellow Jackets after trailing by as many as 11 points. He hit two three-pointers to spark Tech’s 11-0 run at the start of the second half that turned a 35-27 halftime deficit into a three-point lead. His three free throws with 6:17 left gave Tech the lead for good. With the Jackets holding a two-point lead with less than a minute to play, Akins made a key steal and then sank all four of his free throws to seal the win.

Akins scored 23 points, handed out nine assists and grabbed six rebounds in Georgia Tech’s 82-80 at Virginia. He connected on 5-of-8 attempts from the field, including 4-of-7 three-pointers, and was a perfect 9-for-9 at the charity stripe. With Tech trailing by three, Akins sank two free throws with 19 seconds left, and on the Jackets’ final possession he dished to Marvin Lewis for the game-winning basket at the buzzer.