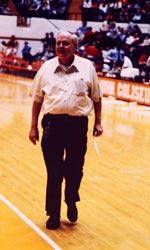 Clemson, SC – Earle Eugene “Pepper” Martin passed away in the early morning hours of Tuesday, April 23. Mr. Martin succumbed due to complications from pneumonia. Martin served the Clemson athletic department in various capacities between 1945-57, including Ticket Manager from 1953-57.

Born on Feb. 6, 1928, Martin came to Clemson in 1945 from Greenwood as a freshman and worked as a student manager with the baseball team. In 1948 he began work as an office assistant in the athletic department until he became ticket manager in 1953. He worked in that capacity until 1958 when he began a 30-year career with the United States Postal Service in Clemson. He received a Special Achievement Award from the United States Postal Service in 1974.

Martin contracted diabetes and was forced to retire in the late 1980s when it became necessary to have a leg amputated. He later had his second leg amputated in 1993 and had lived in Lila Doyle Nursing Home in Seneca since 1995.

“Earle Martin came to a baseball practice when I was head coach in 1945 and said he wanted to become involved in the program,” recalled Walter Cox, who later became Clemson University President and served as Martin’s caretaker in recent years. “He pitched in and helped in any way he could. I remember him coordinating the ticket demands for the 1948 Gator Bowl. That was chore because it was the first sellout in Gator Bowl history.”

“Any Clemson football, basketball or baseball player in the 1950s through the 1980s knew Pepper,” said Al Adams, Clemson assistant sports information director under Bob Bradley from 1974-78. “He was wonderful person. He loved to take pictures and make people happy by giving them away. From Ray Mathews to Ray Williams, everyone loved Pepper.”

“One of my first friends when I came to Clemson was Earle Martin,” said Clemson Sports Information Director Tim Bourret. “I didn’t know anyone when I got here in 1978. I’ve been at Clemson ever since because I have had the good fortune to meet people like Earle Martin.”

Funeral arrangements for Mr. Martin will be announced later in the week.