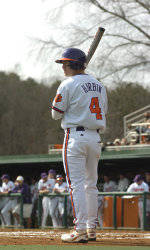 Boston College scored three runs in the ninth inning to defeat #17 Clemson 8-6 in the first game of a doubleheader at Doug Kingsmore Stadium on Sunday. The Eagles improved to 21-24-1 overall and 12-14 in the ACC, while the Tigers fell to 30-16 overall, 14-9 in ACC play. It was also Clemson’s first loss in 26 games this season when leading at the end of the eighth inning. The Eagles evened the series 1-1 as well.

The Eagles jumped out to a 1-0 lead in the first inning. Michael Belfiore hit a one-out single up the middle and went to second with two outs on a delayed steal. Michael Campbell then lofted a single to left to score Belfiore.

The Tigers evened the score in the bottom of the first. Leadoff batter D.J. Mitchell reached on a fielding error by second-baseman Joseph Ayers and went to second when the ball bounded into centerfield. Wilson Boyd’s lineout to center advanced Mitchell to third and Marquez Smith followed with a walk. With an 0-2 count on Andy D’Alessio, he grounded out to shortstop, as Mitchell scored. Smith was running on the pitch, allowing the Tigers to stay out of the double play.

Boston College regained the lead with a run in the third inning thanks to two more two-out hits. Belfiore led off with a walk, but was erased when Johnny Ayers reached on a fielder’s choice. Two batters later, Mike Augustine hit a two-out single to left-center, and Tony Sanchez followed with a single to right-center to plate Ayers.

Smith tied the score in the bottom of the third with two outs when he lined a 3-2 pitch over the fence in left field for a solo home run, his eighth of the season.

Boston College took a 3-2 lead in the fifth inning. Campbell laced a two-out double to right field and scored on Augustine’s single through the right side.

Taylor Harbin tied the score in the sixth inning when he hit a two-out, solo homer to left-center.

Boston College’s two-out success continued in the eighth inning and allowed it to take the lead. Joseph Ayers hit a one-out single through the left side and stole second. Jared McGuire followed with a walk and Peter Frates popped up for out #2. But Ryan Hutchinson lined a 2-2 pitch past D’Alessio at first to plate Ayers. McGuire then scored on a wild pitch when Farina’s 1-2 pitch to Belfiore went to the backstop.

Clemson took a 6-5 lead in the bottom of the eighth thanks to some clutch hitting of its own. Boyd lined a one-out single to left-center, moved to second on a wild pitch, and scored on Smith’s single to left field. Smith advanced to second on the play when McGuire booted the ball. After D’Alessio struck out for out #2, Harbin hit a two-run, opposite-field homer to right-center to put the Tigers ahead. It was his second long ball of the game and fifth of the season.

In the top of the ninth inning, Johnny Ayers led off with a single through the left side. Campbell then hit a slow roller to second, but David Bunnell was covering second base on Ayers’ attempted steal. Bunnell could not get to the ball in time, as Campbell reached first on the infield single. Pinch-hitter Robert Anston struck out looking for out #1 after he failed twice to bunt the runners over. Sanchez then lined a single to left, as Ayers stopped at third. But Addison Johnson booted the ball, allowing Ayers to score the tying run. Joseph Ayers was then hit by a pitch to load the bases, and McGuire hit a 3-2 pitch up the middle for a single to bring in the go-ahead run in Campbell. Frates then lined a sacrifice fly to left to score Sanchez, giving Boston College an 8-6 lead.

Johnson hit a one-out, infield single in the bottom of the ninth to bring the potential tying run to the plate, but Ratliff retired the next two Tigers to end the game.

Boston College had 17 hits, 16 of which were singles. Every Eagle starter had at least one hit, including three hits apiece by Campbell and McGuire. The Eagles were also 9-for-18 with two outs in the game.

Harbin totaled three RBIs on his two home runs, while Smith added two hits and two RBIs for the Tigers.

Clemson and Boston College will conclude the three-game series on Sunday at 6:00 PM.