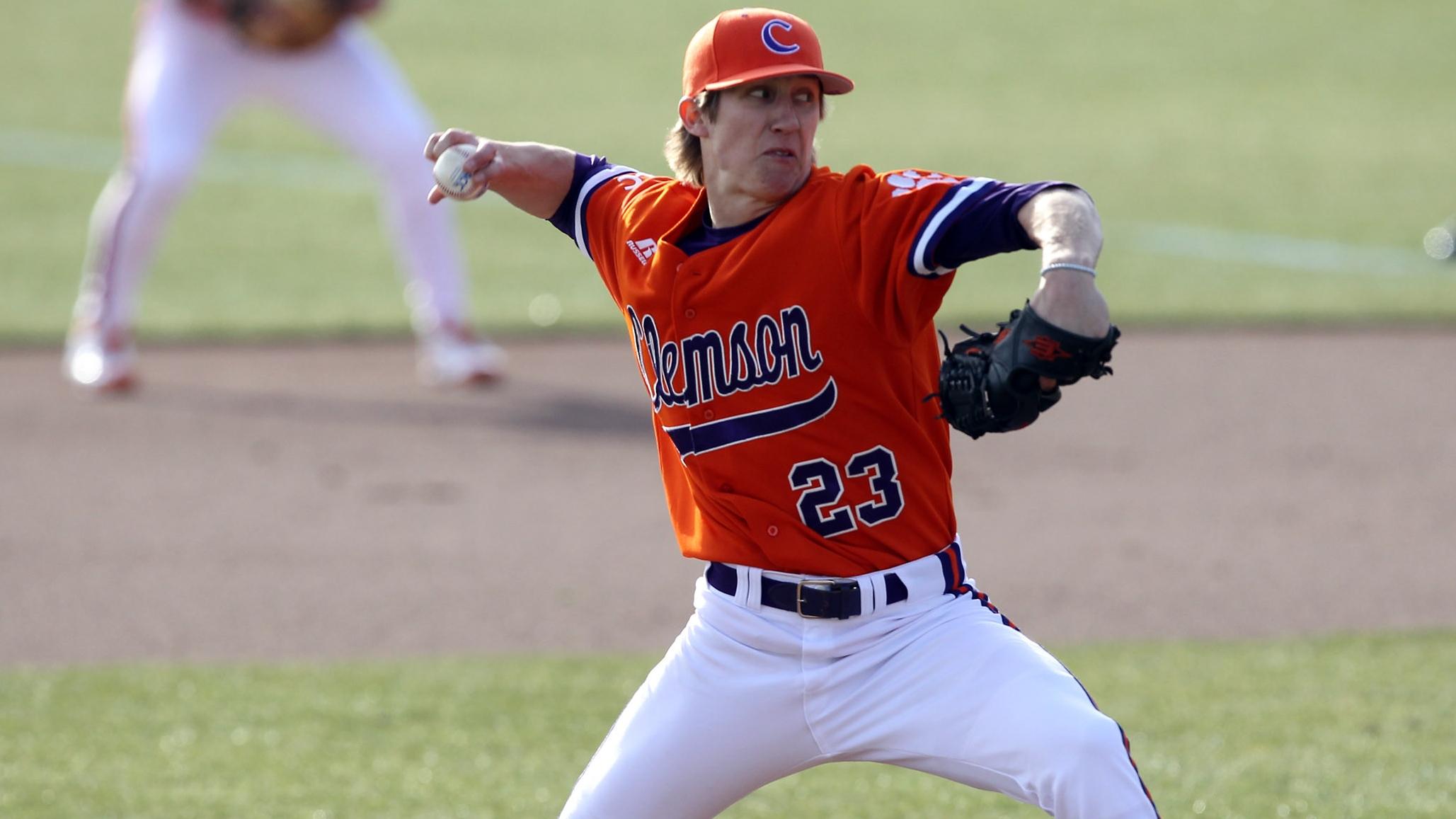 Mitchell McGeein’s two-out, infield single scored John Rubino in the 10th inning to lift Eastern Michigan to a 6-5 win over #13 Clemson at Doug Kingsmore Stadium on Friday afternoon. The Tigers trailed 5-4 in the ninth inning before pinch-hitter Mike Dunster‘s solo homer, the first long ball of his career, tied the score, but the Eagles emerged victorious in both team’s season-opener in front of 5,143 fans.

The Tigers built a 4-1 lead thanks in large part to starter Daniel Gossett, who allowed just four hits, one run, and one walk with four strikeouts in 5.0 innings pitched. But Eastern Michigan scored four runs on four hits in the sixth inning to take a 5-4 advantage and the Tigers could never regain the lead.

Kristian Calibuso (1-0), the fourth of five Eagle hurlers, earned the win despite allowing one run, one hit, and three walks in 1.1 innings pitched. Steve Weber pitched a scoreless 10th inning with a strikeout to record the save.

Clate Schmidt (0-1) suffered the loss despite allowing just one hit and one unearned run in the final 2.0 innings pitched.

The Eagles manufactured a run in the top of the third inning to cut Clemson’s lead in half. Nick Rotola led off with a single to right, stole second, moved to third on a groundout, and scored on Rubino’s groundout.

Clemson answered with a run in the bottom of the third inning when Steven Duggar bounced a two-out single through the right side to score Tyler Slaton. The single upped Duggar’s hitting streak to 10 games dating to 2013.

After the Tigers added a run in the fifth inning, the Eagles plated their first two runs in the sixth inning on Adam Sonabend’s double over Slaton’s head in center to cut Clemson’s lead to 4-3. Eastern Michigan later tied the score when Sonabend stole third and scored on Adam Dennison’s groundout, then Rotola belted a two-out double to left-center to score Ty Gilmore to give the Eagles their first lead.

In the ninth inning, Dunster, a senior pinch-hitter who entered the game with only 55 career at-bats, crushed a one-out, solo homer to right field to tie the score 5-5. The Tigers later loaded the bases, but failed to plate the winning run.

Rubino reached as the leadoff batter and advanced to second in the 10th inning on an error and moved to third on a sacrifice bunt. After Sam Ott was intentionally walked and picked off first base for out #2, McGeein came through with a high chopper to third on a 1-2 pitch that landed safely for a single to score the go-ahead run.

The Tigers put the potential tying run on second base in the bottom of the 10th inning, but stranded their 10th runner on base in the game.

Clemson and Eastern Michigan will play game-two of the three-game series on Saturday at 2:30 PM. Fans who show their men’s basketball ticket from Saturday’s Clemson vs. Virginia game at 12:00 PM can purchase a baseball ticket for $5.