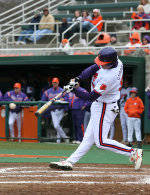 Boston College scored three runs in the first two innings and held on to defeat #6 Clemson 3-2 in the first game of a doubleheader at Commander Shea Field on Saturday. The Eagles evened the series 1-1 with the win, and improved to 20-19-1 overall (5-15 ACC). The Tigers fell to 28-13 overall, 11-6 in ACC play.

Eagle starter Terry Doyle (3-4) pitched 7.1 innings, allowing four hits, two runs (one earned), and two walks with six strikeouts to earn the win. Matt Meyer struck out all three batters he faced, then Kevin Boggan pitched the final 0.2 innings to record his fifth save of the year. The three pitchers combined to hold Clemson to 0-for-11 with runners on base.

Johnny Ayers led off the bottom of the first inning with a single to center and Ryan Hutchinson followed with a walk on four pitches. Faris then hit Jared McGuire on the first pitch to load the bases with no outs. Ayers scored when Dave Preziosi grounded into a 6-4-3 double play. Shawn McGill plated Hutchinson on an infield single to shortstop.

In the second inning, Ryne Reynoso hit a one-out double down the right-field line and advanced to third on a bloop single by Pete Frates to left-center. Ayers then slapped an 0-2 pitch to deep left-center to score Reynoso on the sacrifice fly.

Travis Storrer hit a two-out, solo home run to right field in the fourth inning to get the Tigers on the scoreboard. It was his sixth long ball of the season and fourth in the last five games.

Three errors led to a Tiger run in the fifth inning. Marquez led off by reaching on a fielding error by Hutchinson at short, but was erased on Stan Widmann’s grounder to short. Widmann went to second when Ayers’ throw to first was errant. After Adrian Casanova’s groundout and Herman Demmink’s walk, Brad Chalk laid down a bunt back to Doyle. His throw to first was high and went in foul territory, allowing Widmann to score.

In the seventh inning, Casanova hit a one-out, infield single. Demmink then hit a hard ground ball down the first-base line, but since Preziosi was holding Casanova at first, he was able to stab the grounder, taking away extra bases, step on the bag, and throw to second for the inning-ending double play.

Chalk led off the eighth inning by hitting a deep fly ball to right field, but Reynoso made the catch up against the wall.

The two teams will play game two of the doubleheader at approximately 1:50 PM.